We must be firmly rooted in our Constitution, specifically the fundamental rights.

Earlier last week, at the beginning of the COP23 negotiations in Bonn, a panel of human rights experts from the United Nations said, “The Paris Agreement marked an important global recognition of the devastating human rights impacts of climate change and the key importance of human rights in addressing this global challenge.”

The Paris Agreement is the first global climate change agreement to explicitly mention human rights. The preamble of the Paris Agreement states that the member-states are to “respect, promote and consider their respective obligations on human rights, the right to health, the rights of indigenous peoples, local communities, migrants, children, persons with disabilities and people in vulnerable situations and the right to development, as well as gender equality, empowerment of women and inter-generational equity.”

This year, human rights is in the focus as various civil society groups, youth groups and representatives of indigenous communities are urging the leaders to prioritise human rights in all climate negotiations.

In one of the contact groups, negotiating matters with respect to Article 6 of the Paris Agreement, the least developed countries (LDCs) argued for inclusion of sub-elements for environmental integrity on adverse impacts for environment, social integrity and human rights.

The discussion comes at a time when a report by the Norwegian Refugee Council revealed that the year 2016 alone saw the internal displacement (within their own countries) of about 24.2 million people, globally, due to disasters. Of this, about 2.4 million, ten per cent of global internal displacement, was in India.

In another report, released by GermanWatch on the Global Climate Risk Index 2016, India is ranked as the second-most vulnerable nation in terms of fatalities due to climate change, (Myanmar being the highest) and is ranked third for vulnerability to economic losses arising out of climate change.

In South Asia, climate disasters associated with social instability, poverty and migration are leading to a higher number of child marriages. For our political leaders’ intent on achieving greater economic development and “acche din” for all, there should be greater emphasis on protecting our citizens and the economy from the ravages of climate change.

Therefore, when India works on achieving its greenhouse gas emission targets to reduce global warming under the Paris Agreement, we must do so with an equal emphasis on providing relief and protecting the rights of those who already face the impacts of climate change. 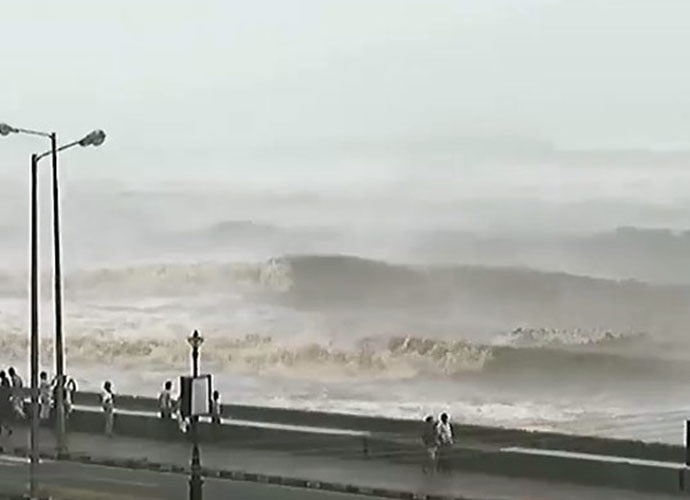 In 2014, India was hit by tropical cyclone Hudhud (Photo: Indiatoday.in)

Fiji, the small island-country presiding over the COP23, has highlighted the issues the islands are facing: rising sea levels and extreme weather events, leading to loss of life and property and loss of territory, habitat, livelihoods and non-economic losses such as cultural rights. We can’t overlook the fact that two of India’s Union territories are island territories, Andaman and Nicobar Islands and the Lakshwadeep Islands, which are extremely vulnerable to climate-related disasters, while being home to several indigenous communities.

In addition to providing timely relief to the victims of climate disasters, it is important that the Indian government responds to the rise of violence against environmental defenders.

In 2016, Global Witness reported that 16 environmental defenders were killed in India, the fourth-highest in the world. The report claims that the main suspect of this violence was police, engaged in quelling environment-related protests. The Guardian reports that in 2017, 10 environmental defenders have been killed in India as of October 17. These tragedies are not indicative of a regime where the rights of environmentalists to express themselves, to enquire and to protest, are being protected. If India is to abide by the spirit of the Paris Agreement, it is crucial that the government investigates these cases, ensures expedited justice mechanisms, and creates stronger protection mechanisms to defend those who defend our right to the environment.

While investing in solar energy and wind turbines is essential, so is a massive infusion of funds into our disaster relief funds, social protection schemes, compensation mechanisms. Then only we will be able to ensure that trained personnel and material are available to manage risk. Investment in green technologies must be accompanied by a concerted effort to create a political climate where environmental defenders can work and express themselves freely without fear of violence or other harms.

Given the United States’ intent to withdraw from the Paris Agreement, India is uniquely placed as the largest constitutional democracy within the global leadership on climate change. India’s climate leadership must, thus, be firmly rooted in its Constitution, specifically the fundamental rights.

Our environmental jurisprudence was born out of our judiciary interpreting the fundamental right to life and liberty as including the right to a clean and healthy environment. About 2.4 million people in India suffered from disaster-related internal displacement in 2016 alone. It is high time human rights occupied a central role within our climate policy, both domestically and internationally.

Also read: How Trump pulling America out of Paris climate change accord will impact world politics

#Human Rights, #Donald Trump, #Greenhouse gases, #Paris climate agreement
The views and opinions expressed in this article are those of the authors and do not necessarily reflect the official policy or position of DailyO.in or the India Today Group. The writers are solely responsible for any claims arising out of the contents of this article.

Researcher in Comparative Environmental Law at the University of Cologne and a former Advocate at the National Green Tribunal in India.