A clear method can be seen in Parth Pawar's defiance. And that, in turn, clearly shows that all is not well in the Pawar family.

Parth Pawar seems to be in defiant mood despite being chided by his grand-uncle and NCP President Sharad Pawar for speaking out of line. Yesterday, after the Supreme Court declared its verdict in the Sushant Singh Rajput death case and handed over the case to CBI despite opposition from the Maharashtra government, Parth tweeted, "Satyamev Jayate."

It was signal enough that he was referring to his earlier demand that this case should be handed over to the CBI, a demand which was heavily criticised by Sharad Pawar. Interestingly, the Home department in Maharashtra is with NCP, and Home Minister Anil Deshmukh had the time and again clarified that there was no need for a CBI probe in the case since Mumbai Police are capable enough to handle it.

One may think that Parth Pawar, who is the elder son of Maharashtra Deputy Chief Minister Ajit Pawar, maybe talking about the Sushant Singh Rajput case either out of genuine concern or because he wanted to be in sync with the 'popular' demand on social media. But Parth's demand for a CBI probe in the case came just a few days after Sharad Pawar's open statement expressing his full faith in the Mumbai Police investigation, and how this case was unnecessarily being given so much importance. This is not the first time that this clash of views has happened. When Pawar Senior took a dig at the construction of Ram Mandir, saying it was not going to solve the pandemic in this country; Parth, again on social media, was seen praising the construction of the Ram Mandir. This combined, resulted in a never-seen-before outburst from Sharad Pawar against his own grandnephew. Pawar Senior said he gave 'a damn to what Parth Pawar says, he is immature'. And now, Parth Pawar's 'Satyamev Jayate' tweet is only going to add to the fury.

A clear method can be seen in Parth Pawar's defiance. And that, in turn, clearly shows that all is not well in the Pawar family. Like any other political family in this country, it now seems evident that the Pawar family is also going to see a tussle of political ambitions within the family.

Let's try and understand how it all started, and how this can prove fatal to the stability of the Maharashtra government.

Parth's father and Sharad Pawar's nephew Ajit Pawar has always been looked at as Pawar's political heir. Pawar's daughter Supriya came into politics much later; and by the time she entered the arena, Ajit Pawar had already made his position unattainable in NCP. Ajit, known in the party as 'dada' - the Marathi word for elder brother - despite having a say in the decision-making, could never quite get the highest position. His uncle's influence despite his age remained unchallenged. This had also resulted in tension within the party.

Ajit Pawar, on many occasions, has hinted that his uncle take a back seat due to his age: "Now the time has come that you should just give us blessings, we have also almost reached the age of 60," Ajit Pawar famously said during one of their party functions. However, it couldn't persuade Sharad Pawar to loosen his grip from over his 20-year-old party.

On many occasions, Ajit Pawar had taken drastic decisions like resigning as MLA or resigning from his post as deputy chief minister when he was faced with corruption charges, without informing his party president. But in the end, Ajit Pawar has had to come back to accepting his uncle's leadership.

What Ajit accepted as his fate, his next generation, which was keen on having a grand entry into politics, was not ready to take lying down. Last year, in 2019, when the party was searching for a right candidate from the Maval parliamentary constituency, Parth Pawar threw his hat into the contest. Sharad Pawar, not keen on putting him into politics, opposed Parth citing the 'pariwarwad' debate prevalent in the country back then. Pawar tried to clarify that 'so many' Pawars can't be contesting elections at the same time; but that didn't stop Ajit Pawar's wife and his other relatives from demanding a party candidature for Parth. 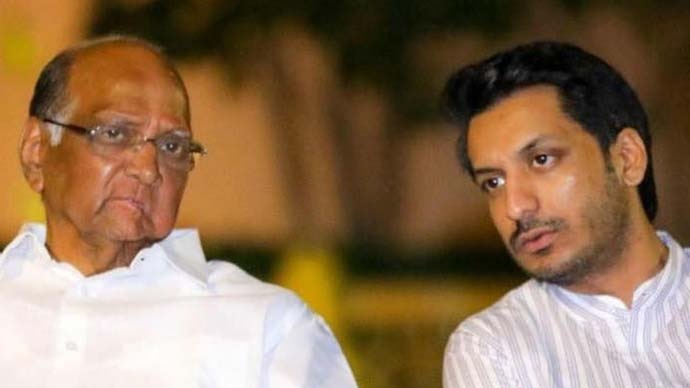 Finally, to avoid an open confrontation, Senior Pawar gave in to the demand. Pawar also wanted to show Maharashtra that despite everything, the Pawar family didn't split. Pawar knew well that if not handled tactically, the family conflict could result into an ugly political fight, as was seen with the Thackerays and Mundes - that when cousins get into the political quarrel, relations are the casualty. But Parth Pawar lost his election badly, and what Pawar thought would end the crisis, actually began it.

It is said that Parth thought that the time had come for his father, who has influence in the party, to start searching for his own path. This was seen during the Maharashtra government formation, when Shiv Sena and BJP parted ways after the Maharashtra Assembly elections, and Shiv Sena, NCP and Congress were engaged in talks to form the government. One morning, everyone woke up with pictures of Devendra Fadanvis and Ajit Pawar taking the oath together as Chief Minister and Deputy Chief Minister respectively. Parth was then present by his father's side. This was the first time Ajit Pawar had not only challenged his uncle, but had also tried his luck going separate ways and flexing his muscle, claiming it's he who is now the leader of NCP.

Ajit Pawar's revolt couldn't last for more than 3 days, and finally, he had to return to the NCP fold after much coaxing from other Pawar family members, including Sharad Pawar's wife who rarely - or perhaps never - takes part in such political games. All this was finally done by explaining why the Pawars should be united.

It is said that Parth didn't even know that Ajit Pawar had decided to put his weapons down and go back to his uncle. It is said that Parth, like his father, has no specific ideological inkling and firmly believes that instead of being with Shiv Sena and Congress, they will have a better future if they choose to go with the BJP.

In a state like Maharashtra, where all four major parties - Congress, BJP, Shiv Sena and NCP - all have their areas of influence and it keeps any single party from coming to power on its own, a pre- or post-election alliance can make or break your political future.

Sharad Pawar always toyed with the idea of going with the BJP, or at least allowed people to make the perception that he may choose to go with the BJP. But despite all his issues with the Congress, he chose to never have an alliance with the BJP just to keep his secular brand intact. It was first shattered when Ajit Pawar openly formed a government with BJP. Pawar, notwithstanding Ajit's open revolt, had to take his nephew back into the party and also make him Deputy Chief Minister. This underlined Ajit Pawar's influence in the party. That even if he is not as influential as capable of challenging his uncle, like what Chandrababu Naidu did with his father-in-law NT Rama Rao, Ajit Pawar can surely create some trouble.

Is Parth's open defiance to coax his father to finally do that?

#Sushant singh rajput case, #Nationalist Congress Party, #Ajit Pawar, #Sharad Pawar
The views and opinions expressed in this article are those of the authors and do not necessarily reflect the official policy or position of DailyO.in or the India Today Group. The writers are solely responsible for any claims arising out of the contents of this article.