The Bullies of Partition: How the Muslim League silenced the majority of Indian Muslims strongly opposed to the creation of Pakistan

A majority of Muslims in pre-independent India were opposed to the two-nation theory and creation of Pakistan, argues a new book titled, Muslims Against Partition, written by scholar Shamsul Islam. Islam argues that the Muslim League under Muhammad Ali Jinnah won the bulk of the seats in the provisional assembly elections of 1946 as it had the support of Muslim elites — pre-independence India had restricted franchise, which excluded a huge mass of peasants, women, a majority of small shopkeepers, traders who were not taxpayers, persons who didn’t own property or have high educational qualifications.

“Only 28.5 per cent of adult population of the provinces could vote in the provincial assembly elections of 1946. Economically and socially depressed portions were virtually disfranchised… for example, in Bihar, the electorate consists of merely 7.8 per cent of the total population,” Islam writes, while rolling out statistics to marshal his argument that the idea of the Muslim League being the sole representative of Muslims is based on shaky grounds.

Patriotic Muslims — despite their numerical strength — failed to defend the ‘united India’ cause due to their inability to organise people and the Muslim League’s reign of terror — the Muslim League created a quasi-military Muslim National Guards numbering over 3,00,000 in 1931 to instil fear in its detractors.

These ‘volunteers’ physically attacked Maulana Abul Kalam Azad, Dr Saifuddin Kitchlew, Maulana Hussain Ahmad Madani, Maulana Hifzur Rahman and many others. They received support from British policies, a section of the Congress and right-wing Hindu radical outfits such as the Rashtriya Swayamsevak Sangh (RSS) and the Hindu Mahasabha.

A majority of the Muslim clergy of the pre-independent era were opposed to the creation of Pakistan — but educated and westernised Muslims, like Jinnah and the poet Mohammad Iqbal, were successful in labelling them as ‘possessed bishops’. 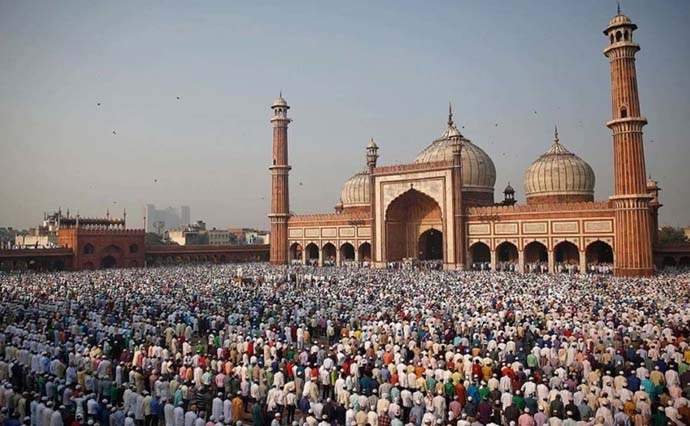 Most Muslims in India were opposed to India's Partition. But they remained unheard or overruled. (Source: Reuters)

Maulana Hussain Ahmad Madani, who advanced composite nationalism or the ‘one-nation theory’ based on Islamic principles compatible with democracy and secularism, was constantly targeted by Iqbal, Jinnah and other League supporters. Ironically, people like Jinnah — whose practical life did not manifest any religion and religiosity — were in fact able to thus score over those who served Islam and whose life was a model of righteousness.

Madani’s Jamiat e-Ulema remained bitterly opposed to Partition — the All India Momin Conference was a massive organisation from northern and eastern India, representing backward castes among Muslims, mostly craftsmen, artisans and labourers, numbering around 4.5 crore. Its 1943 resolution read, “Patriotism and nationalism of the Indian Mussalmans will never tolerate vivisection of our dear motherland into several hostile states.”

But the Muslim League, consisting of upper caste Muslims, ignored the Momin Conference simply because the organisation, despite its gigantic size, had few voters in the restricted franchise.

The same was the case with the Majlis-e-Ahrar-ul-Islam (assembly for the freedom of Islam) that stood firmly for a united India. Ahrar was crushed by the British for opposing Indian participation in World War II. Between 1939 and 1943, over 9,000 Ahrar members were awarded rigorous imprisonment.

The All Parties Shia Conference, All India Muslim Majlis, Krishak Praja Party Bengal, Ahle-Hadees, Anjuman-e-Watan (Baluchistan) and South Indian Separation Conference were some other prominent and influential Muslim organisations opposed to the Partition.

Interestingly, throughout the freedom struggle, Urdu poetry was a strong tool used to fight the divisive politics advanced by the Muslim League.

But, in post-independent India, Urdu is often described as a motivating force behind Pakistan.

Sample this couplet by poet Shamim Karhani written in 1942,

According to Professor Mukhia, a section of the Congress and British rulers helped Jinnah achieve his goal — the two-nation theory, Mukhia points out, was reinforced again and again by many national icons of pre-independent era such as Pandit Madan Mohan Malaviya, Lala Lajpat Rai, VD Savarkar, MS Golwalkar, C Rajagopalachari and Sardar Vallabhbhai Patel.

The real strength of Shamsul Islam’s work is in presenting evidence-based arguments and its focus on otherwise little known Allah Bakhsh — who fought a valiant battle against the Muslim League. Bakhsh, a former chief minister of Sindh, had successfully organised a mammoth Azad Muslim Conference in 1940 to counter Jinnah’s Pakistan plan. The English press, which was largely under British control, accepted that it was the most representative gathering of Indian Muslims belonging to the lower and working classes.

Wilfred Cantwell Smith, in his book, Modern Islam in India: A Social Analysis, wrote: “... There was no doubt that these delegates [Azad Muslim Conference] represented a majority of India’s Muslims.”

However, by 1943, Bakhsh was killed — allegedly by League goons.

Also read: Dear Hindus, Muslims and others, will you ever take your eyes off the magic mirrors?