[Book extract] The pressure to impose compulsory biometric authentication in the PDS deprives many of their food entitlements.

State governments are under growing pressure from the central government to introduce compulsory biometric authentication of all cardholders in the public distribution system (PDS). This top-down imposition threatens to disrupt recent progress with PDS reforms. It also deprives millions of people of their food entitlements.

India's PDS has improved steadily during the last 10 years (see section 7). The system used to be most ineffective and corruption-ridden, with leakages of around 50 per cent at the national level, going up to 80 or 90 per cent in some states. Around 2007, Chhattisgarh took the lead in reforming the PDS - making it more inclusive, methodical, and transparent. Within a few years, the system was overhauled. Later, it turned out that the Chhattisgarh model (so to speak) was replicable. Odisha was among the first states to emulate Chhattisgarh's experience, with similar results. Many other states also initiated Chhattisgarh-style PDS reforms: broad coverage, clear entitlements, the de-privatisation of PDS shops, the separation of transport agencies from distribution agencies, computerisation, fixed distribution schedules, tight monitoring, active grievance redressal, and more.

In 2011, a survey of the PDS (initiated by the Indian Institute of Technology, Delhi) was conducted by student volunteers in nine states: Andhra Pradesh, Bihar, Chhattisgarh, Himachal Pradesh, Jharkhand, Odisha, Rajasthan, Tamil Nadu, and Uttar Pradesh. It emerged that the system was working reasonably well for "below poverty line" (BPL) households: on average, they were receiving 84 per cent of their foodgrain entitlements from the PDS. A similar picture emerged from a follow-up survey in 2013. However, high leakages continued in the "above poverty line" (APL) quota, which tended to be used by the central government, at that time, as a dumping ground for excess food stocks. The National Food Security Act (NFSA), enacted three years ago, was - and still is - a chance to complete the process of PDS reform and ensure a modicum of food security for everyone. Under the NFSA, the APL category is abolished and eligible households come under two well-defined categories: Priority households, entitled to 5 kg of foodgrains per person per month at nominal prices, and Antyodaya households (the poorest), entitled to 35 kg per household per month. The PDS is to cover at least 75 per cent of rural households at the national level, rising to 80-90 per cent in the poorest states.

In June this year, we went back to six of India's poorest states (Bihar, Chhattisgarh, Jharkhand, Madhya Pradesh, Odisha, and West Bengal) for an update. We found that four out of six had a fairly good PDS, with most NFSA cardholders receiving the bulk of their entitlements every month and relatively low exclusion errors.

The last two, Jharkhand and (especially) Bihar, still have a long way to go. Even there, however, the situation is much better than a few years ago. In Jharkhand, for instance, the transparency of the system has vastly improved, and the official NFSA website is among the best in the country.

Recent progress, however, is in danger of being undone soon due to the central government's counterproductive push for Aadhaar-based biometric authentication (ABBA) in the PDS. This involves installing point of sale (PoS) machines at PDS shops, and verifying the identity of cardholders by matching their fingerprints against the Aadhaar database over the internet every time they buy their food rations.

This system requires multiple fragile technologies to work at the same time: the PoS machine, the biometrics, the internet connection, remote servers, and often other elements such as the local mobile network. Further, it requires at least some household members to have an Aadhaar number, correctly seeded in the PDS database.

This is a wholly inappropriate technology for rural India, especially in the poorest states. Even in state capitals, network failures and other glitches routinely disable this sort of technology. In villages with poor connectivity, it is a recipe for chaos. Note that internet dependence is inherent to Aadhaar, since there is no question of downloading the biometrics.

Recent developments in Rajasthan illustrate the dangers of imposing biometric authentication on the PDS. During the last few months, the government of Rajasthan has tried hard to enforce the system. The use of PoS machines is compulsory and every PDS shop has one. Yet, according to official data compiled by Nikhil Dey, only 61 per cent of Rajasthan's foodgrain allocation found its way through the PoS system in July 2016, with a similar figure (63 per cent) for August.

The rest is either siphoned off or delivered using the old "register" system - which of the two is hard to say since utter confusion prevails about the permissibility of using registers as a fallback option.Further evidence comes from Ranchi district in Jharkhand, where the PoS system is also mandatory. In July 2016, NFSA cardholders in Ranchi district received less than half their foodgrain entitlements through that system, according to the model website mentioned earlier. The situation was much the same in August. 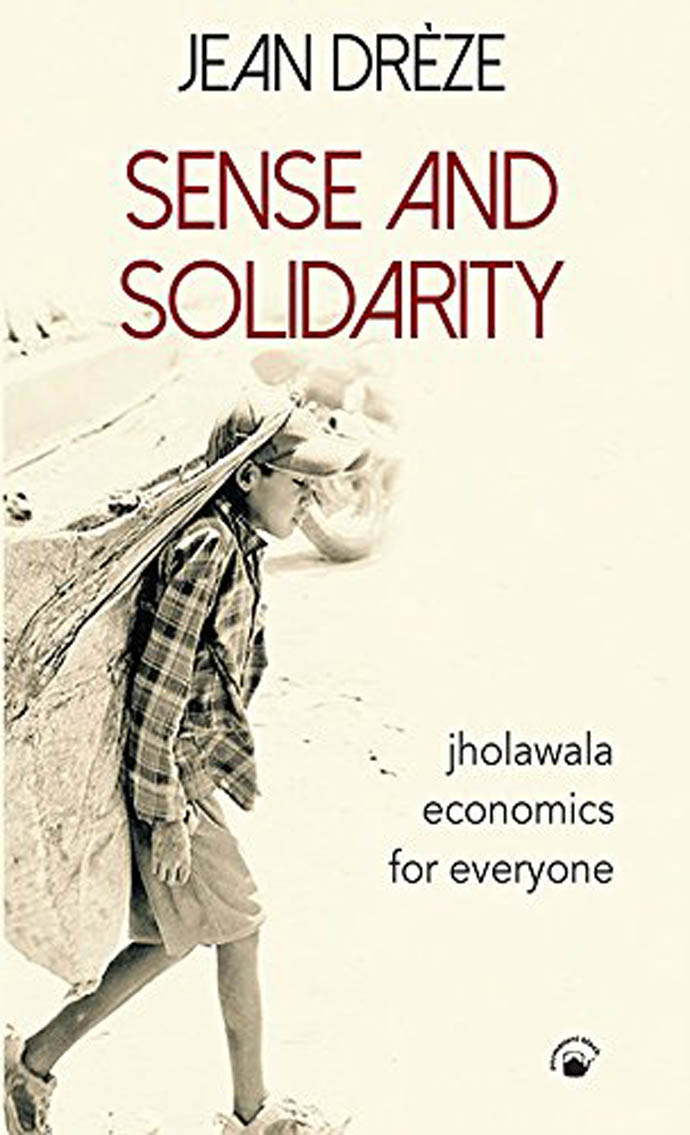 Sense And Solidarity - Jholawala Economics for Everyone, by Jean Drèze, Permanent Black, ₹ 795.00

As in Rajasthan, it is not clear whether those for whom the PoS system does not work in Ranchi are getting any grain through the old register system. Officially, that is not allowed, according to local PDS dealers and officials (indeed, some dealers have been suspended for using this fallback option). Even if it happens unofficially, this dual system, where the PDS grain goes partly through the PoS system and partly through the fallback register system, is the worst. The reason is that only PDS dealers know whether and when the register system is permissible, and they have no incentive to share that information with the cardholders. Quite likely, the new system is reviving PDS corruption in Jharkhand, reversing a healthy trend towards lower leakages in recent years.

A short visit to a PDS shop just outside Ranchi quickly brings out the multiple vulnerabilities of the new system. Within minutes, we met many people who had been deprived of their food rations for months because they had no Aadhaar number, or because their Aadhaar number had not been correctly seeded, or because their biometrics did not work, or simply because the PoS machine returned various error messages.

Even those for whom the system works face huge inconvenience. Often they have to make repeated trips to the PDS shop, or send different members in turn, until the machine co-operates. Sometimes schoolchildren are asked to skip classes and try their luck at the PDS shop. This unreliable system causes a colossal waste of time for everyone.

By the way, all this is one year after I was told by the food department's upbeat consultants that "the PoS system is functional throughout Ranchi district".

In spite of ample warnings, the central government continues to push for compulsory Aadhaar-based biometric authentication (ABBA) in the PDS. Incidentally, this is a violation of Supreme Court orders. The court did allow the use of Aadhaar in the PDS, but not its imposition for PDS users. Nor can the government invoke the Aadhaar act to justify this move: the relevant sections of the act are yet to be notified.ABBA seems to be expected to ensure a corruption-free PDS. This expectation, however, builds on a misunderstanding of PDS leakages.

The main vulnerability today, at least in Jharkhand, is not identity fraud (eg bogus cards), but quantity fraud: PDS dealers often give people less than what they are entitled to, and pocket the rest. ABBA is powerless to prevent quantity fraud. Biometrics may help to reduce identity fraud, such as it is, but that does not justify depriving people of their food entitlements when the technology fails.

As with many other applications of Aadhaar, this one is proceeding like a juggernaut, without paying serious attention to the collateral damage. Instead, the central government peddles bogus figures of Aadhaar-enabled financial savings (often relayed by unsuspecting columnists or economists) to justify further imposition of the technology. It is only when concerned journalists, activists, or researchers make enquiries from the victims that we learn about the adverse effects of Aadhaar on the PDS.

The central government and its advisers pride themselves on their commitment to "evidence-based policy", but this is a case where evidence is being systematically ignored to press on with technological solutions based on blind faith (handsomely nurtured by commercial interests). The drive to impose biometric authentication on the PDS must stop immediately to avoid further damage. There are better ways of plugging last-mile leakages, including simpler technologies not dependent on the internet. Imposing a technology that does not work on people who depend on it for their survival is a grave injustice.

[The above piece is reproduced from the chapter "Dark Clouds over the PDS" in Jean Dreze's Sense and Solidarity: Jholawala Economics for Everyone. Extract published with permission from Permanent Black.]

Also read: Student suicides are our collective shame. Education mustn't be a battle unto death

#Food Security Act, #Biometric, #PDS, #Aadhaar
The views and opinions expressed in this article are those of the authors and do not necessarily reflect the official policy or position of DailyO.in or the India Today Group. The writers are solely responsible for any claims arising out of the contents of this article.

Author is a development economist and activist.