The video might have been circulating for days on social media, showing a middle-aged man, dark-skinned from all the hard work under the blazing sun, clad in kurta-pajama, thrashed mercilessly by a band of men, young and old. The video - filmed on a bystander's smartphone - showed Pehlu Khan's lynching, the public spectacle of violence perpetrated by "gau rakshaks" that had gripped the whole country like a mental plague. Pehlu Khan's body was bloodied, he was pleading for mercy. No one showed him any.

Five-and-a-half months since the man was beaten to death — Khan died in an Alwar clinic, but not before he named the perpetrators of his own death — the Rajasthan authorities have "closed the case", reports the Hindustan Times. The six men named by Khan and his son, Irshad, who was also present at the scene and received serious injuries himself, have been let off for want of evidence. This, despite the dying man's testimony, the incriminating video which was circulated with great aplomb among the right-wing hate mob, and the family members' grievous calls for justice.

But no. Rajasthan Police in Alwar think none of those named in no uncertain terms by the victim and his kin are guilty. The April 1, 2017, lynching of Pehlu Khan has nobody responsible. Who's this "nobody" who has been on a killing spree in India, felling Muslim and Dalit people, journalists, rationalists, truth-tellers and seekers, challengers to this regime of fear and loathing?

Jack The Ripper won't hold a candle to India's most prolific serial killer, Mr No One. He kills beef eaters, rationalists, journalists... https://t.co/FPNxckJseF

HT reports that "authorities are under pressure to protect the cow vigilante suspects", because the six men duly cleared belong to Hindutva right-wing groups - particularly Vishwa Hindu Parishad and Bajrang Dal. They have been cleared on the basis of "statements by staff of a cow shelter and policemen, as well as mobile phone records", according to the investigation report. 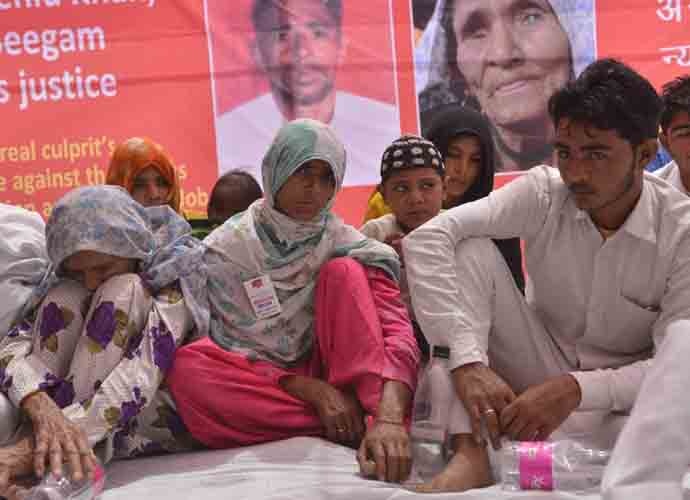 HT writes: "The staff of the cow shelter, Rath Gaushala, has maintained that the six - Om Yadav (45), Hukum Chand Yadav (44), Sudhir Yadav (45), Jagmal Yadav (73), Naveen Sharma (48) and Rahul Saini (24) - were present on their premises, which was about 4km from the attack site. Rath Gaushala is patronised by Jagmal Yadav."

There are others who are "still named", among them two minors. But given that those whose names were uttered by the dying victim of a hate crime - the public murder most brutal, meant as a theatre of violence to drive home the message that minorities better fall in line, else face the consequences - have been let off, how much of justice can we expect from those who were perhaps tangentially present at the scene of crime?

A timeline of how those allegedly involved in Pehlu Khan's murder were given bail and allowed to roam free betrays a definite pattern. The pattern shows that from the beginning itself, the authorities had very little intention of bringing the culprits to book. There were bails one too many. Rajasthan home minister Gulab Chand Kataria accused Khan's family of being cattle smugglers, when they were dairy farmers with all the papers and documents in place. Local courts cleared the Khan family of such baseless allegations thrown around by the band of cow vigilantes themselves, in order to shift the blame on the victim and his aggrieved family itself, that they brought upon the murder on themselves.

Barely three weeks after Pehlu Khan's lynching, Sadhvi Kamal, head of a cow protection group, equated the vigilantes to revolutionary freedom fighters. While Prime Minister Narendra Modi, after much criticism from mainstream and social media, finally rapped the gau rakshaks on their knuckles for being "fake cow lovers", and killing in the name of the cow, the admonition barely stopped the beef lynchings.

Junaid, a 16-year-old boy, was stabbed to death on a Delhi-Mathura train not far from his home in Ballabhgarh on a day he was returning from Eid shopping in Delhi. The Islamophobia unleashed by the Hindutva organisations, whether directly linked to the ruling BJP, or affiliated tangentially with the Sangh Parivar, existing as its "loony fringe", has taken away too many lives already, instilling a permanent fear among the likes of Pehlu Khans and Mohammad Akhlaqs, who don't utter the word beef in public, who recoil in horror at the mention of cow, despite being dairy farmers, or ordinary cattle traders all their lives, leading a life of relative, middle-class, rural prosperity, until everything changed in a few years.

Reports from Pehlu Khan's village in Nuh, Haryana, tell a grim story. It's a story of intimidation in installments - the big shock of the first lynching to death as the primeval message of fear and fright; then the casual apathy, the ritual neglect and pumping in more fear. Pehlu Khan's mother, an old wiry woman whose face became the face of grief - like Najeeb Ahmed's mother, Rohith Vemula's mother, Akhlaq's mother - has been asked to speak to TV cameras, regurgitating her pain at the death of her 50-year-old son, only to be now told, nobody killed Pehlu Khan, nobody lynched him to death in broad daylight, on a highway in Alwar, surrounded by a battery of bystanders.

Meet nobody, India's scariest serial killer, who lynched Pehlu Khan to death. Give him time and he'd prove to you that it's him only who's responsible for the deaths of Akhlaq, Junaid, Zafar Khan, the disappearance of Najeeb Ahmed, the suicide of Rohith Vemula.

Nobody is India's most trustworthy hitman, undertaker and the choicest weapon of those who have a problem with India's teeming diversity, its civilisational plurality, now battling a pall of gloom, awaiting its ultimate assassination by nobody. Rajasthan Police has let off those whose faces can be seen in the video in which Pehlu Khan was shown begging for mercy. Khan was wrong. Nobody doesn't relent. And he'd strike again. Because lynchistan is his stomping ground.