It is deplorable that India is still struggling with these retrograde, unscientific and irrational beliefs.

Menstruation is a routine biological phenomenon for every woman across the world; just as natural as breathing. Yet, it is astonishing how the patriarchal society has used menstruation as a tool to subjugate and trivialise women. A customary belief that cuts across almost all religions – that a woman is impure while she is menstruating – has been successfully deployed to marginalise and demean women, and to force upon them the status of rights-less, unequal and objectified beings.

This taboo, which is invariably spoken about in hushed voices, has now come to the fore and will be deliberated upon by the highest court of the country.

The issue before the court is the constitutional validity of the Kerala Hindu Places of Public Worship (Authorisation of Entry) Rules, 1965, which prohibits women, aged 10-50 years, from accessing places of worship. Those supporting the ban rely on the taboo surrounding periods. The Kerala High Court had upheld the ban in 1993 (in S Mahendran versus Secretary, Travancore) on the ground that this was “in accordance with the usage prevalent from time immemorial”.

The court accepted the contention that “since the deity is in the form of a Naisthik Brahmachari, it is therefore believed that young women should not offer worship in the temple so that even the slightest deviation from celibacy and austerity observed by the deity is not caused by the presence of such women”. 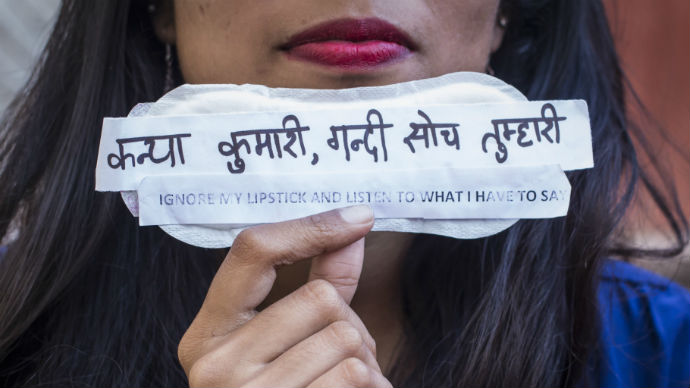 This reasoning is based on the assumption that because a menstruating woman can procreate, she always has sex on her mind, which renders her incapable of being celibate and hence she becomes impure. The underlying premise, therefore, is that a woman’s character is lustful and would aim to distract the celibate deity in order to fulfil her own desires.

Consequently, women of menstruating age are prohibited from entering the temple, lest celibate and austere worshippers are unable to hold on to their celibacy upon coming in contact with young, menstruating women. This belief punishes one for the failure of another. It is indeed akin to giving death penalty to the deceased as the accused could not prevent himself from murdering the deceased.

This derogatory view is reflected in the recent statement of a religious leader who, while condemning the decision of the Bombay High Court upholding the right of women to enter and offer prayers in all the temples in 2016, reportedly said that “allowing women into a shrine devoted to Lord Shani (Saturn) will increase rapes”.

A religious leader reportedly called the victim of the 2008 Delhi rape “as guilty as her rapist”. After the Shakti Mills gang rape case, the Mumbai Police commissioner supposedly found it difficult to strike a balance between “promiscuous culture and a safe and secure environment for the people”. There is always a tendency to distance the accused from the crime and to attribute the rise in cases of violence against women to “sexual needs of women”, if not ridiculous extraneous circumstances such as “western culture”, “jeans”, “mobile phones” or simply “noodles”.

Is this not the objectification of women, victim-blaming and victim-shaming? Do not such customary beliefs/practices enjoy widespread acceptance and observance because of deep-rooted patriarchal structure of our society?

When the Supreme Court hears the above matter, one can only hope that it does not decide it on the touchstone of the “essential tenet of religion” test since this test, in my view, will result in a grave miscarriage of justice. It must be remembered that the concept of “purity and pollution” has long been considered an intrinsic aspect of the Hindu religion, as evident in the writings of BR Ambedkar. He has brought to light the predicaments of the lower castes that are forced into isolation and penury to prevent pollution from being caused to the upper castes.

Menstruating women are similarly viewed to be pollutants and thus forced to live in isolation to prevent them from polluting the virtuous. It matters little that such belief is the primary reason for girls dropping out of schools, leading to the rise in illiteracy and disempowerment.

In many parts of India, the practice remains to stigmatise girls by shuttling them off to huts outside their villages during their periods; huts that are unsafe, unhygienic and lacking in basic amenities, apart from being accessible to the public.

Interestingly, while the practice in several parts of India is to forcibly isolate menstruating women, Nepal - where 81.3 per cent of the population follows Hinduism - criminalised the practice in August 2017; 12 years after it was condemned by its Supreme Court.

It is deplorable that our county is still struggling with these retrograde, unscientific and irrational beliefs. Surely it is not difficult to understand that the country as a whole is incapable of progressing if half of its population is forced to live a trampled and compromised life.

It is imperative that Supreme Court, therefore, examines this issue not from the “essential tenet of religion” test but through the prism of constitutional guarantee of dignity, individuality, liberty and freedom to women. And one remains optimistic that the Supreme Court will indeed do so, given the recent spate of commendable judgments such as the verdict on Right to Privacy, Triple Talaq and holding sex with minor wife to be rape.

With such precedents, the court has assumed a greater responsibility: of upholding constitutional morality, regardless of whether such beliefs and practices to demean and degrade menstruating women form a part of the basic tenet of the religion.

Also read: Padmavati is a convenient myth in the time of airbrushed history

#Supreme Court, #Periods, #Menstruation
The views and opinions expressed in this article are those of the authors and do not necessarily reflect the official policy or position of DailyO.in or the India Today Group. The writers are solely responsible for any claims arising out of the contents of this article.