Why is it always Delhi? PM Modi should end Lal Qila’s monopoly as the Independence Day speech site

Delhi's Lal Qila doesn't evoke good memories, nor does it possess civilisational significance for Indians, compared to Kashi or Hampi. Why should our I-Day speech not be delivered from here?

Pradhan Mantri Narendra Modi has a huge fan following on social media. He is the third most-followed politician on Twitter, falling a few followers short compared to former US President Barack Obama and current US President Donald Trump.

PM Modi uses his social media reach very effectively, both in policy matters as well as communicating directly with the people. So, when he sought recommendations for his Independence Day speech through his social media feeds, the first thing came to my mind is Lal Qila — with a huge question mark.

Ever since Jawaharlal Nehru, the first PM of independent India, chose Lal Qila in Delhi for his Independence Day speech, it has become a custom for all PMs to address the nation from the ramparts of the historic fort. Why always this? Is the venue of our Independence Day speech set in stone? (Photo: Reuters)

But my question is — Why ‘Lal Qila’? Why not other places in India? There are several other places that are part of India’s civilisational memory, the nation’s consciousness, and places related to colonial resistance.

Why not take the celebrations to those places on a rotation basis?

The choice of Lal Qila for the first celebrations and the speech by Jawaharlal Nehru, India’s first PM, was as arbitrary as, say drinking coffee. There appears to be no rhyme or reason for choosing this iconic building in Delhi's Old City.

After it was built (1638-1649) by Shah Jahan, the fifth Mughal emperor, the Qila became a symbol of the political power and cultural achievements of the Mughals. However, the empire itself had started showing signs of distress during the reign of Aurangzeb, son of Shah Jahan. By the time Aurangzeb finished his reign, the Mughal empire was already in tatters.

As the Mughals lost their political power, so did the splendour of Lal Qila start to wane. The fort was ransacked by Nadir Shah in 1739 — less than 100 years after it was inaugurated. Nadir Shah also took with him the crown jewel of the Mughal throne, the iconic Koh-i-Noor diamond. Soon after, it was the turn of Maratha, Jat, Gujjar and Sikh warriors who frequently raided the Qila. By the time of Shah Alam II, the emperor’s power did not extend beyond a few kilometres of the confines of the Qila. As the saying goes: "Sultanat-e-Shah Alam, Az Dilli ta Palam" (The empire of Shah Alam is from Delhi to Palam). A decline, then fall: From the looting of the Koh-i-Noor to Bahadur Shah's dreadful trial, the Lal Qila does not evoke great memories. (Photo: India Today)

The subsequent failure of the First War of Independence in 1857 saw the arrested emperor Bahadur Shah being brought to the Lal Qila, tried, then exiled. The fort was plundered again — this time, by the British and then turned into a prison during the INA trial

All in all, the Qila does not evoke any good memories, nor does it, to my mind, emphasise civilisational significance.

When Mahatma Gandhi talked of ‘swaraj’, he wanted to take freedom and democracy to each and every village of India. Gram swaraj was central to Gandhi’s idea of the economic development of India with independent units of villages having a self-sufficient economy.

It is ironic that the two biggest national celebrations — Independence Day and Republic Day — are both centralised and celebrated within the confines of Lutyens’ Dilli.

Keeping this in mind, here are five suggestions of alternate places where PM Modi can hold Independence Day celebrations each year during his current term. All these places have special significance in the civilisational history of India as well: Stunning and Strong: The Virupaksha Shiva temple in Hampi is older than the famous Vijayanagara empire itself. (Photo: Wikimedia Commons)

Once the seat of India’s mighty Vijayanagara Empire, Hampi is now a UNESCO World Heritage site. Beautifully carved temples and centuries-old stone mandapas are the signature sight of the city. From the early 14th century CE to its demise in 1656, Vijayanagara — or the City of Victory — ruled most of India south of Deccan.

With its towering gopuram, the Virupaksha Shiva temple is the physical, spiritual and mythological core of the city. The temple, by all accounts, predates Vijayanagara. The empire itself is a symbol of India’s resistance against Islamic invasion. 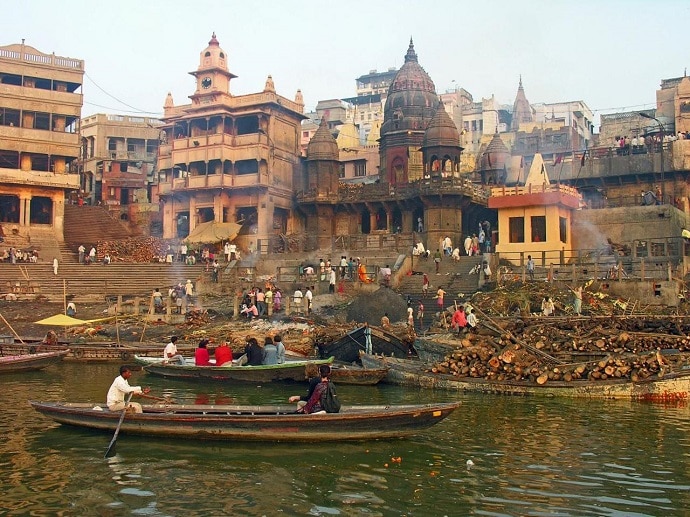 Beyond history itself: PM Modi's own constituency, the city of Kashi, is the oldest urban settlement in the world. (Photo: Wikimedia Commons)

Situated on the banks of the holy river Ganga, Kashi, Varanasi, or Banaras has been part of what Diana Eck calls India’s ‘sacred geography’ from antiquity. Talking of Kashi’s history, Mark Twain famously wrote in 1898 in his ‘Following the Equator: Journey around the world’: Benaras is older than history, older than tradition, older even than legend.

Varanasi, also known as the City of Lights, is considered by many as “the oldest urban settlement of the world”. Kashi is one of the seven sacred sites, mokshapuri, of Hinduism. The city of Varanasi declined in infrastructure and lustre during the three centuries of Muslim occupation when many of the city’s Hindu shrines were destroyed. However, it never lost an inch of ground in the nation’s consciousness.

The city has seen a mercurial transformation in its overall infrastructure ever since PM Modi made it his Lok Sabha constituency. Dazzling: The Rath Yatra destination and site of complex ancient traditions, Puri has it all. (Photo: Wikimedia Commons)

The eastern coastal town of Puri in Odisha is the seat of Lord Jagannath, the Lord of the Universe.

The Jagannath temple is another one of seven mokshapuris in India and a celebrated tirthsthala for Hindus.

The temple was built in the 12th century CE. The annual Rathayatra draws hundreds of thousands of devotees from across the globe when the Lord Jagannath, along with his sister Subhadra, and his elder brother Balabhadra are brought out from the temple and placed in massive rathas. The devotees pull these rathas in a procession along the one-and-a-half kilometre-long route.

One of the interesting features of this temple is that it has a chronicle of its own.

Popularly known as ‘Madala Panji’, the chronicle has been associated with the temple since olden times. Specific families who have preserved it for generations are still writing the Panji. Nothing captures the spirit of rebuilding and resilience better than the temple of Somnath.

“The Somnath temple signifies that the power of reconstruction is always greater than the power of destruction”, said Rajendra Prasad, the first President of India, while performing the installation ceremony after it was rebuilt after Independence.

Since the temple was first desecrated and ransacked by Mahmud of Ghazni in 1025-26, it has been plundered and rebuilt several times. The last rebuilding effort was undertaken by the government of India after Independence. Rajendra Prasad inaugurated the newly built temple in May of 1951. 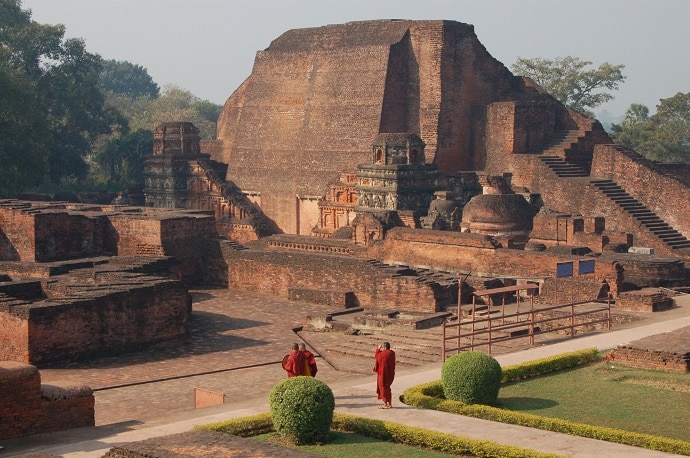 Nalanda was the site of an ancient university and Buddhist monastery. Established during the Gupta period (4th century CE), the university attracted students from places as distant as China and the countries of South-East Asia at its peak. Indian scholar HD Sankalia refers to Nalanda as “truly an international university” that met all of Cardinal Newman’s criteria of a modern university.

The site was sacked by Bakhtiyar Khilji in 1193. Nalanda's sacking traumatised the local psyche and according to folklore, nine million books burnt for weeks. The lore of Nalanda is being revived and a new modern university has been reopened at the site in 2010.

PM Modi has already taken several steps to reach out to the farthest and remotest parts of the country through his economic and welfare schemes.

Taking the Independence Day celebrations to places other than Delhi will undoubtedly be taking a step towards Mahatma Gandhi’s dream of gram swarajya.

Also read: Ladakh is finally free after Article 370: Kashmir humiliated us and snatched our funds. We never wanted to be with them

#Lal Qila, #PM Narendra Modi, #Red fort, #Independence Day speech
The views and opinions expressed in this article are those of the authors and do not necessarily reflect the official policy or position of DailyO.in or the India Today Group. The writers are solely responsible for any claims arising out of the contents of this article.