The gruesome killing of Youth Congress block secretary, SP Shuhaib, is the latest in the long list of political murders dotting Kannur since half a century.

Incidentally, one of the accused in the 1969 murder that set off this cycle of violence is incumbent chief minister Pinarayi Vijayan and it was widely hoped he would be the one to bell the cat. But as the number of political murders in his less than two-year term stand at 22, one has to assume that the chief minister, who also holds the state home ministry, has failed in this endeavour miserably. At around 11.15pm on February 12, a four-member gang arrived at a roadside eatery in a car and hurled two crude bombs. Two men with machetes pounced on Shuhaib and they hacked him repeatedly below his waist.

The post-mortem report records 41 hack wounds, of which 37 were inflicted below his waist. The gruesome attack reminded Keralites of a similar barbaric attack on renegade Marxist TP Chandrasekharan in 2012 by cadres of the Communist Party of India (Marxist).

A video of CPM flag-bearing activists airing death threats against Shuhaib has surfaced, pointing the finger of suspicion clearly at the ruling party in the state. The CPM workers' rant "your days are numbered" can be clearly heard in the video. Meanwhile, CPM's Kannur district secretary P Jayarajan had declared that they have nothing to do with the murder. (Similar declarations were also made in the wake of TP Chandrasekharan's murder by then state secretary Pinarayi Vijayan). With the surrender of two CPM members - Akash Thillangeri and Rijin Raj - following a search operation at "party villages" in Kannur, these declarations by senior leaders have been belied.

What makes the latest murder stand out from the spate of murders in the last couple of decades is the fact that it has the potential to initiate a new wave of violence and drag Congress back into Kannur's murder politics. The Kannur feud, involving CPM and BJP/RSS since the 1980s, has dominated the discourse on the politics of murders as other parties such as the Muslim League and the Congress have gradually scaled down their involvement in violence.

Congress, in particular, has completely abandoned it since 2000. While the party was in the thick of things in the 1970s, they have been on the sidelines of extermination politics since the 1980s despite remaining the primary Opposition party in the state and the district.

Congress' Kannur face K Sudhakaran has begun a 48-hour fast from Monday and has warned of converting it into an indefinite hunger strike if the "real" culprits aren't arrested by then. Kannur's cycle of violence sustains on "proxy culprits" in which the parties involved present proxies in place of real perpetrators in connivance with police officers that ultimately leads to acquittals at the trial stage.

Shuhaib was a protege of Sudhakaran and was also actively involved in religious and charitable activities of Sunni Students' Federation (SSF), the youth wing of AP Sunni faction. Incidentally, the AP Sunnis led by Kanthapuram Aboobackar Musaliar has always backed the CPM-led Left Democratic Front (LDF) in Kerala and this murder spoil things altogether.

What began as a local Kerala Students Union (KSU)-Students Federation of India (SFI) skirmish (Student bodies of Congress and CPM intensified when Centre for Indian Trade Unions (CITU)-the Marxist trade union arm-workers got involved). But how did it lead to such a brutal murder?

Shuhaib's uncle Ismail reveals that his nephew was a CPM sympathiser, who moved to the Congress before 2015 though he never revealed the reason for that switch. Shuhaib had led the Congress' civic poll campaign in Edayannur and Therur wards in the CPM-dominated Keezhallur panchayat. With his influence in SSF, Congress won both wards. Congress won even without the backing of its ally Indian Union Muslim League in these wards - which rang alarm bells in CPM that enjoys dominance in these parts of Kannur. Apostasy is not taken lightly in Marxist strongholds and Congress' abandonment of extermination politics has seen a large number of ex-CPM cadres flocking to BJP/RSS and even vice versa. Ideology is secondary when it comes to such abandonments as the primary motive is to settle scores or self-preservation.

Shuhaib's murder is also reminiscent of the murder of Ariyil Shukoor, a Muslim League student leader in 2012 in Kannur. Incidentally, Thalassery MLA AN Shamseer owned up to the murder during a television debate.

While CPM used the minority protection card in the 2016 Assembly elections, Shuhaib's murder may not go down well with many in the community. 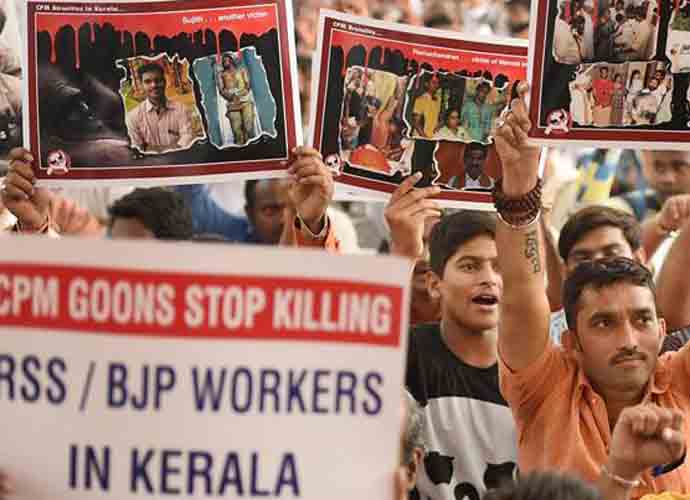 It has also come to light that an attack might have been planned on Shuhaib in Kannur central jail where rules are regularly flouted by political prisoners in connivance with police officials. When Shuhaib was arrested after a clash with CPM on January 13, the magistrate court ordered that he be lodged in the sub-jail for undertrials. But in an inexplicable move, he was swiftly shifted to the special sub-jail located in the Kannur central jail. K Sudhakaran had intervened with jail DGP R Sreelekha to shift him back to the sub-jail then.

Shuhaib's father, Muhammed, was also aware of the threats to his son's life and has confirmed receiving such messages on his phone. Shuhaib was the sole breadwinner of his family comprising three sisters. The human suffering in Kannur's murder politics is often a neglected topic. Political murders have crippled many families in this district and while parties use them as "martyrs" to further their politics, the families are left to suffer.

A few months back, BJP had unleashed a campaign nationally against the ruling CPM accusing them of spreading "red terror" in Kerala. People of Kerala were unanimous in thwarting the propaganda and were quick to point out that it wasn't a unidimensional issue.

Marxists will have to come around the reality that extermination politics has no place in a civilised society in 2018. A lot of their omissions and commissions have been conveniently ignored over the years due to their utility in preventing the growth of communal politics in Kerala, where people live in complete harmony. But if these murders keep repeating every now and then under their rule, one will have to question their commitment to law and order. While they claim to have lost more people than the BJP/RSS since the 1980s, these arguments fall apart if we are to take into account the past two years alone of Vijayan's chief ministership. CPM has lost only three lives against seven on the other side in Kannur in this brief period.

Chief minister Vijayan chose to remain mum on this ghastly incident for six days. He only spoke on February 18. It seems the transformation from being the ringleader of Marxist politics in Kannur to the people's chief minister hasn't been an easy one. But if the police choose to act as an extension of the party in this case (Kannur SP has upbraided his subordinates for leaking information to the party and has officially complained to the state DGP), a new wave of violence will be the natural consequence and Kerala can ill-afford setting the clock back.