How we cleaned Varanasi's Prabhu Ghat and inspired change

We have been cleaning Shool Tankeshwar Ghat, which is a short distance from Varanasi, since 2012. We used to clean Assi Ghat, too, but that wasn't a big deal - it involved sweeping and picking up garbage. I recall that day vividly. It was February 12, the day Temsutula Imsong (from Nagaland) and I were taking a boat ride along the Ganga. As we were about to pass Prabhu Ghat, the unbearable stench assailed our noses. This was a bit of a shock, since we had heard a lot about the ghats being cleaned up. We decided to take a walk and see for ourselves.

Prabhu Ghat made us stop in our tracks. What we saw was disgusting - worse than disgusting. There was excreta strewn all over the area. Which ever way I turned made me want to throw up. There was nothing holy about what we saw. We walked back silently, overwhelmed and distressed by the deplorable state of the ghat. Temsutula later told me what was troubling her; she, too, was feeling helpless because we could do nothing about it.

A few days later, we mustered the courage to visit the area again. This time we wanted to do a recce to understand the gravity of the situation and to properly assess the possible measures that we could initiate. We approached the civic authorities first to check if they could help us.

The response, unsurprisingly, wasn't positive. Their attitude reeked of indifference. Maybe they had bigger things to attend to. The outcome of the meeting was not all bad, though. We decided to take matters in our own hands, despite limited resources.

Temsutula Imsong and I contributed funds. We don't know how, and it always brings a smile to our faces, but we managed a sum of Rs 10,000.

We began to spend an hour every day, teaching in a school (this was inspired by our PM Narendra Modi asking people to do so, and we found that approach highly practical). The programme we wanted to start kept getting postponed.

On March 14, we decided that enough was enough, and set our plan in motion. We also decided to use social media and crowd sourcing to gather volunteers for the clean-up. Our aim was to clean the ghat up by March 22, and organise a signature campaign on Martyr's Day. We spent the next few days milling around the area, interacting with locals and deliberating on how to maintain the area once the cleaning was done.

We began to use the hashtag #MissionPrabhughat on social media on March 18. Soon, our team was joined by Manish Dubey, Shreyash Singh, Ayush Mishra, Anurag Singh, and Ankit Pandey, which gave us immense strength and support. The results were beyond our imagination.

This is what followed:

I have no hesitation in acknowledging that Prime Minister Narendra Modi’s vision has been a big inspiration. We would not have been able to garner the kind of support #MissionPrabhughat was getting. Even small children at the ghat were saying: “Swachch Bharat Abhiyaan ke liye aaye hain!” Since then, no one refused to join us in cleaning the ghat. For once, the vision of clean India was acknowledged, accepted, and also imbibed to some extent, by the society. We saw that happen. 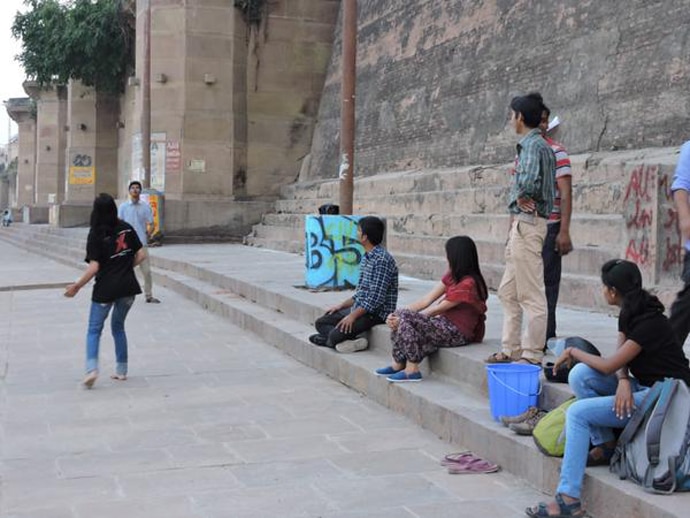 By the fourth day, the total expenses of our cleanliness drive amounted to Rs 2,700. This would not have been possible had it not been for the people who pitched in. We did most of the cleaning manually and that helped us cut cost. We were also lucky. We managed to get nice and good-hearted people to do the initial cleaning with us. The labour costs were to the tune of Rs 1,800 and about Rs 900 was spent on purchasing material like brooms, buckets, phenyl, trash bags, and masks.

We also learnt something important during the mission: There will always be people who will nitpick without reason. We came across people who mocked us, ogled at us and passed lewd comments. There were some who were constantly trying to paint the entire effort in a bad light on social media. We decided to ignore them and focus on the people who stood by us - that took care of all the negativity because we were surplus on positivity.

We had visited these ghats so many times that we became a common face for the children who played there. Every day, when we went around, they accompanied us. And no amount of convincing could make them stay away from cleaning the ghats. We wanted them to watch us and not clean, but we had to give way to their enthusiasm. One day, when a man was peeing , these small kids started yelling and taunting him, and almost chased him away. I will always remember that scene: a well-built man, scared, being yelled at and chased by small kids. We nearly split our sides laughing.

I wish that such positive stories are highlighted more, so that more people are inspired to work for such causes.

You will be surprised to know that the #MissionPrabhughat tag reached more than 29 lakh unique accounts on social media, with more than one crore impressions. And the local media did not take note of it (which says a lot about how things work). Anyway, we weren't really focused in that direction and wanted to share with anyone who was keen to know. We did propagated primarily on social media.

Social media gave us an opportunity to reach people directly and spread the word without any compromises or pre-written scripts. We saw the power of social media here. We want to make #MissionPrabhughat a model for others to emulate - in terms of finances, efficiency, execution, and every other facet that concerns cleanliness. 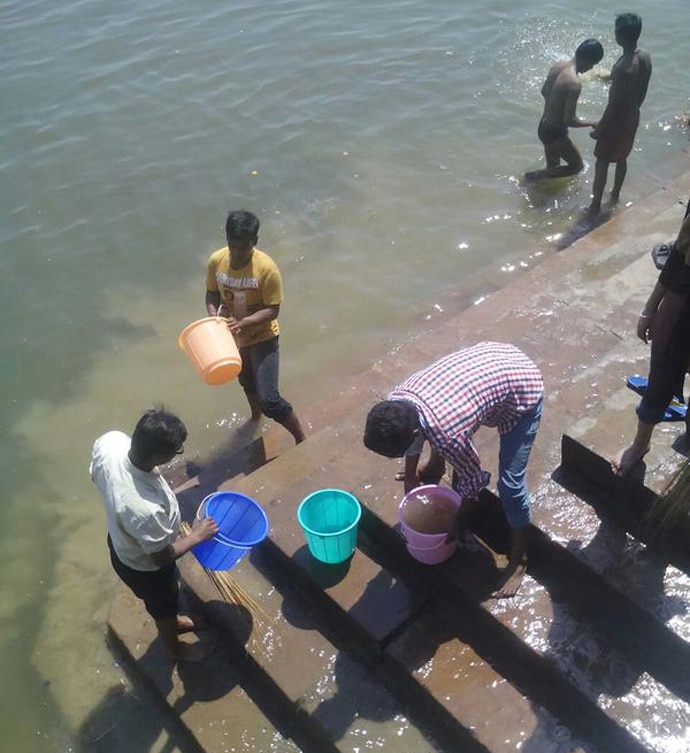 At this ghat, we have started the practice of making “offenders” clean the area with buckets that we provide. The word is spreading fast and we are seeing results.

The initiative is open for anyone to work on and improve upon. We do not seek ownership of the ghat, but will be more than willing to pitch in.

Further, I would like to say that #MissionPrabhughat is not over yet. We are trying to find a viable solution to the problem of open defecation, and also get Prabhu Ghat on Varanasi's tourist map.

Temsutula Imsong and I run an NGO named Sakaar Sewa Samiti, and have dedicated ourselves to doing things that appear small, but have a long term impact.

For more information, please have a look at www.sakaar.co.in. Thank you. I believe this will help.

#Varanasi, #Clean India, #Swachch Bharat
The views and opinions expressed in this article are those of the authors and do not necessarily reflect the official policy or position of DailyO.in or the India Today Group. The writers are solely responsible for any claims arising out of the contents of this article.

Here to explore the dimensions of human interactions... and maybe learn from them. This does not equal searching for gyan.