The former president of India, Pranab Mukherjee was invited by the Rashtriya Swayamsevak Sangh (RSS) on June 7, 2018 to deliver the valedictory address to a batch of the Sangh’s trainees, at the right wing organisation’s headquarters in Nagpur. The batch of men in the audience had been trained to be RSS’ future leaders. Thanks to Mukherjee, the whole nation watched how the RSS displays its might before citizens.

It is important to note that while the former president did not witness a well-trained academic batch, he gave a lecture on "nation, nationalism and patriotism" at the RSS drill. For what exactly these RSS “paramilitary personnel” that he addressed were trained the nation does not know. Or does it?

If the young RSS cadres dressed in khaki pants (no knickers now) and white shirts with folded hands — much like military personnel — keep their bodies fit for a war, whenever it comes, the nation is in danger.

The belts over their tucked-in shirts looked exactly like the kind that army personnel wear. RSS chief Mohan Bhagwat and two of his deputies (one a Sikh and the other a non-Sikh — certainly not a Muslim), like army commanders, had donned the same dress, as Mukherjee — a former head of state — watched the drill in his civilian “Bengali babu” dress. 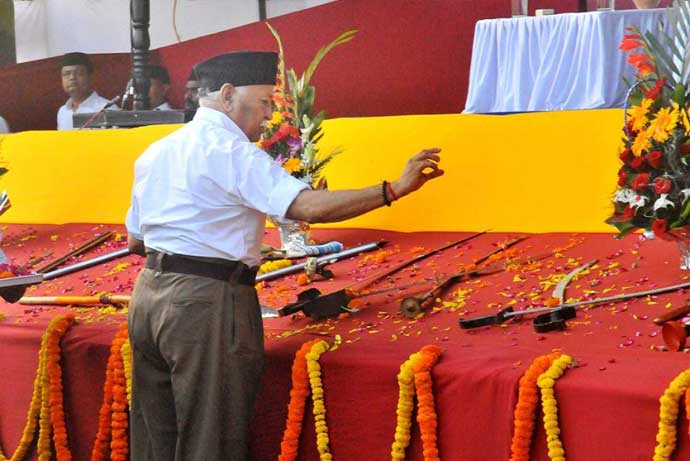 He had to watch their drills for more than an hour — the young RSS trainees had lathis in their hands (fortunately not guns) and had assembled in rows in the same way Indian Army does. Let us not forget that the RSS too does not admit women into its highest ranks.

If women were not considered strong enough to fight the enemy in the Indian Army, they are seen as a source of “pollution” in the Sangh’s ranks. This is a spiritual-political all-male army, while the national army is secular and all-male. It is true that women have entered some wings of the national army, but the RSS does not allow such entry to women. It worships the abstract Bharat Mata, without allowing women to hold the reins of the sacred Sangh.

I watched the drill with fear and awe as all the men used lathis for quite a few exercises. The front-row leaders were twisting and rolling their lathis as if to tell the enemy: beware of our might. In one exercise, the front-row leaders brandished long knives, showing the nation that if lathis do not help, knives will be taken out. Against whom? — that is no doubt a genuine question. If we were to assume that it is against the Pakistan army or terrorists, or the Chinese army, or the Bangladesh army, or the Nepali army (again, one is a Muslim nation and the other a communist-ruled Hindu nation), can mere lathis and knives fight foreign armies?

Though the RSS chief recently proclaimed that his trained cadres could reach the borders within 24 hours, whereas the Indian Army would take 24 days for the same task, how does it fight?

Marching to the beat of their own drum

In the final round of the drill that the former president witnessed, there was a drum in every RSS trainee’s hands, as many of our Armymen have on our Republic Day. That drum beat was music to our ears.

Mukherjee, as president of India, has received many customary salutes at drills by the Indian Army. On June 7, the RSS army gave him a similar salute. The national army’s gesture of salute is always under the fluttering flag of India — in the shadow of three colours whose meaning is well-known. But this private army’s drill took place under the fluttering flag of the RSS — in the saffron shadow.

In my view, it is an anti-national flag for the simple reason that in 90 years of existence, the Sangh’s literature has not shown an iota of respect for the production (agrarian or industrial) and dignity of labour — it is all about religion and war. 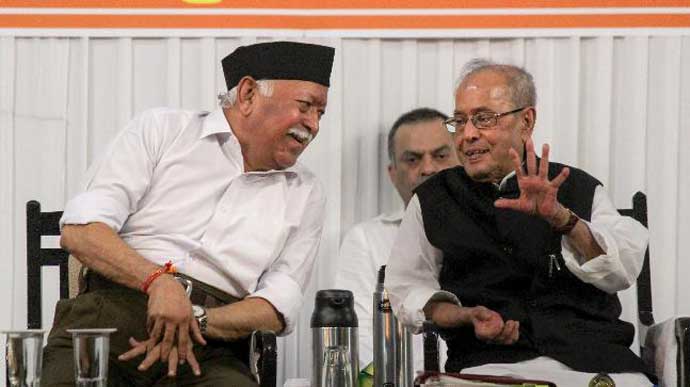 After June 7, the nation is in danger more than ever. Photo: PTI

No nation progresses with religious war and production should be at the centre of progress, but the RSS does not share this ethos.

Our armed forces eat meals of every kind while the RSS army is trained to follow a strictly vegetarian diet. They did not even share a single dish of fish with our “Bengali babu” former first citizen, who lectured them about respecting plurality in every sphere of life!

It must be remembered that the lynching based on the suspicion of beef-eating was carried out by similarly trained armies, because they did not agree with the victim’s food preferences.

The only relief that the drill brought was that Mukherjee delivered his lecture in English — which is against the RSS' nationalist ethic.

Understandably, the Sangh's cadres did not appreciate it. How many of the trained RSS “army” men indeed understood what former president spoke is a mystery, because his address was not translated by the organisation.

We must first ask why such unofficial “paramilitary” organisational training is being allowed by the state on Indian soil. Former president Pranab Mukherjee will see how his lecture impacted the RSS when it is out of power. Photo: PTI

In what way is this armed training different from that of underground Maoist organisations? One private army cannot be considered nationalist and another anti-national.

Even if we assume that the militant — not just military — organisation was not pro-British (which it was) and indeed anti-British till 1947, and had legitimate rights to organise drills as the Azad Hind (not Hindu) Fauj did under the leadership of Subhas Chandra Bose, what is the use of such exercises seven decades after Independence unless they have a design to wage war against those within India?

The other fundamental question is: why did a former president visit the RSS headquarters to legitimise a drill, and give a lecture to a private army? Going to universities, colleges or social organisations that work for social reform or knowledge is one thing, and lecturing a militant, anti-production force another.

Such a militant organisation has nothing to do with nationalism or patriotism.

Lectures of nationalism or patriotism to lathi- and knife-wielding forces would send wrong signals to those who are living under the threat and fear of those very lathis and knives. Does not Pranab Da, as his admirers call him, know this organisation has been part of rioting in various parts of India on countless occasions? He did not go there with the assurance that they will give up militant drills. They have done it in his presence and told the nation that they would conduct such drills — even with the baggage of his lecture notes by their side.

Pranab Mukherjee will see how his lecture impacted the RSS when it is out of power, hopefully.