So then, what was so remarkable about the event which attracted the country's undiluted attention towards it?

Well, it was the unmasking of the Congress so far perceived by many as a liberal, open-to-dialogue, supporter-of-free-speech party.

The senior party leader believed to be close to the party high command, Anand Sharma, in fact laid bare the Congress' true views on what 'dialogue' means to it.

Dialogue can only be with those who are willing to listen, absorb and change. There is nothing to suggest that RSS has moved away from his core agenda as it seeks legitimacy.

Sharma said that you engage in a dialogue with someone willing to listen. Well, the RSS invited Pranab not just to listen to Bhagwat, but also to talk. Sharma said, the party you enter into a dialogue with should be ready to absorb — only Sharma knows how to gauge that. Last, but not the least, he said the party should be ready to change. The sponge in Sharma's worldview clearly failed to absorb the idea of dialogue. No dialogue can begin with the premise that: "I am here to change you, so listen and absorb."

Any well-intentioned dialogue, deeply rooted in Indian culture and the DNA of its argumentative citizens, begins with the following premise: "Hey! We have a problem. We must sit down and talk to iron out our differences." But a party, whose culture reeks of dynastic politics, which believes that governing the country is its birthright because its leaders participated in the freedom struggle, cannot be expected to understand the nuances of how great democracies are built.

What happened in the country on June 7 was remarkable in so many ways.

But the greatest takeaway from the event was just how overwhelmingly beautiful the idea of India is.

We all know that Pranab Mukherjee showed great magnanimity by accepting the RSS' invite. Now, whether he did that to send a message to his own party, that he had been denied his due or out of a genuine feeling to reach out to RSS cadres with his message of what it means to be an Indian, is a different matter. But not many have talked about the fact that Pranab is the same person who supported the Emergency imposed by then-prime minister Indira Gandhi. A period during which the RSS was declared a banned organisation. A period in which the democratic rights of ordinary citizens were suspended. A period that lasted for well over two years.

A period considered to be a blot on Indian democracy.

So, on June 7, it wasn't just Pranab who took a few steps towards the RSS.

The Sangh too took several steps towards Pranab and the ideological stream he represents.

While Pranab drew flak from his party for agreeing to attend the event, the RSS too was criticised for, in a way, legitimising the Emergency.

But the Congress completely failed to walk the talk on the need to keep India's pluralistic, composite culture alive and prospering.

The RSS founder, Keshav Baliram Hedgewar, whom Pranab ended up describing as a  "great son of mother India", failed to understand India in its entirety when he said, "Hindustan is for Hindus. Hindustan is a country of Hindus. Like other nations of other people (example, Germany of Germans), this is a nation of Hindu people."

But the fact about India drawing its strength from its diversity was not lost on Mohan Bhagwat, when he said, "Every citizen born in India is an Indian. It is his right to worship our motherland. We Indians are all one and united."

We sure do not need a lesson from the RSS on who an Indian is and who she is not because it is the Constitution, not the RSS, that binds us and defines us. But we also do not need the Congress to tell us who is worth a dialogue with and who is a complete pariah.

Yes, Pranab is a Congressman. But he is also the former president of the country and on that count, well within his capacity to speak from any platform he so chooses. The Congress can appropriate Pranab, the politician — but not Pranab, the president.

But why is the Congress so averse to dialogue? If indeed the RSS is the divisive, bigoted, communal organisation that the Congress claims it is, then all the more reason to talk, engage and reason out with it. After all, the Congress has itself time and again reached out to Hurriyat leaders, with an offer for dialogue — some of whom have openly supported joining Pakistan. 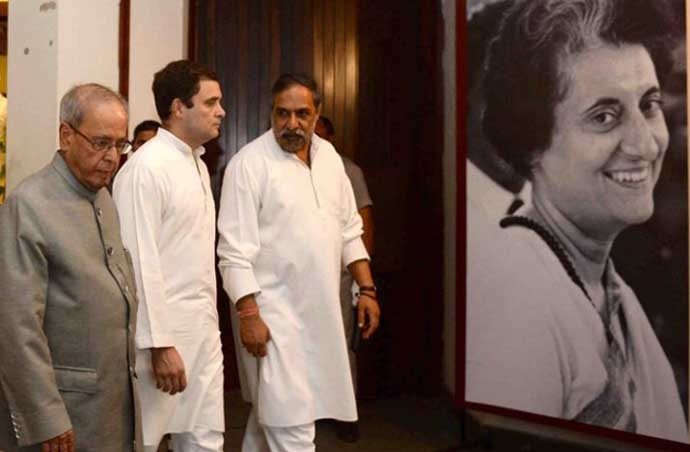 The Congress can appropriate Pranab, the politician — but not Pranab, the former President. Source: Twitter

The grand old party's idea of dialogue is definitely not inclusive.

Amartya Sen in his seminal work, the The Argumentative Indian, writes, "Nor let us be resentful when others differ from us. For all men have hearts, and each heart has its own leanings. Their right is our wrong, and our right is their wrong."

It will help if Congress leaders grab a copy of this book and read it. For those who have already read it, it is revision time.

Much as the Congress would want, it can't wish away the RSS.

RSS shakhas are reportedly spread across 60,000 towns in the country. It is difficult to put a number to how many members the organisation has because it has never declared so. But given how badly the BJP depends on the RSS for booth-level election management, it is clear that the reach is far and wide. Frank admission: At a recent event at the AMU, Salman Khurshid admitted to the 'blood on the Congress' hands'. Photo: PTI

How can a national-level party then refuse to establish dialogue with the organisation? The Congress says it was the RSS which was responsible for the killing of Mahatma Gandhi. But how can it not see the blood on its own hands, the existence of which, after decades of riots and communal violence, was recently admitted to by none other than Salman Khurshid, a senior leader of the Congress.

And yes, it applies to the Congress too.

Now that the Congress' mask is off, it must not lose heart. Course correction is always an option. The Congress must step out of its echo chamber and engage with the voices of dissent challenging the grand old party's grand hypocrisy.