What made Pranab Mukherjee accept RSS invite to address workers in Nagpur?

The former president's decision has left the Congress stunned.

Former president Pranab Mukherjee accepting the invite to address an RSS event scheduled to be held at its Nagpur headquarters on June 7, has taken one and all by surprise.

The news that Mukherjee, a Congress stalwart who served as a minister in several Congress governments and widely known as the party's chief troubleshooter, has come as a rude shock and embarrassment to his partymen as well as detractors of the RSS, the ruling BJP and Prime Minister Narendra Modi. 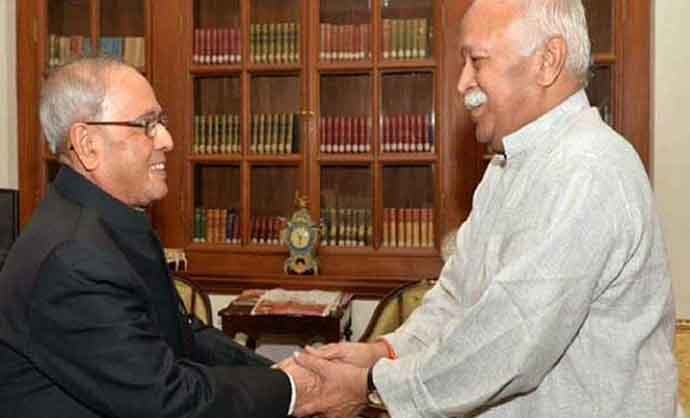 Beneath the handshake: When RSS chief Mohan Bhagwat called on Pranab Mukherjee to extend Diwali greetings in 2015.

Conversely, the fact that Mukherjee will be the chief guest at the concluding session of a 25-day camp of RSS’ Shiksha Varg (education wing) has enthused the right-wing camp.

I got a taste of his revulsion for the BJP about 15 years ago.

Ahead of the 2003 Madhya Pradesh Assembly elections, Mukherjee had visited Bhopal in his capacity as the chairperson of the Congress’ manifesto committee. He held a press conference in the party headquarters situated at Roshanpura Crossing. While he was all praises for the then Madhya Pradesh CM Digvijaya Singh and mentioned about the Dalit agenda that he had launched, Mukherjee sought to downplay the rift and violence which this initiative had resulted between the Dalits and others in the poll-bound state.

After the press conference, I asked him whether the Congress would succeed in surmounting the challenge posed by lack of development on electricity, road and water fronts even if the Dalit agenda helps Digvijaya.

This had Mukherjee enraged. His fair skin turned red with anger. He was trembling. “Even if these problems persist, do you think a communal party like the BJP should come to power?” he shouted. I argued that it was not a question of “should”. While I was discussing what could happen because of the situation on the ground, he was interested in conveying what should happen.

I did not stretch the discussion further because I could sense his abhorrence for the BJP which was the party ruling at the Centre with Atal Bihari Vajpayee as the prime minister. Uma Bharti, who became the chief minister after the November 2003 Assembly election, was a Union minister.

Fast forward to the movement launched by anti-corruption crusader Anna Hazare for the implementation of jan lokpal at the Centre and in the states. The Congress-led UPA government conceded Anna Hazare’s demand to set up a joint committee of the civil society and the government to draft the Jan Lokpal Bill.

Mukherjee, who was the Union finance minister then, was appointed as the chairman of the 10-member joint drafting committee (JDC). The government side had telecom minister Kapil Sibal, law minister Veerappa Moily, water resources minister Salman Khurshid and home minister P Chidambaram as other members.

The civil society was represented by Shanti Bhushan (co-chairman), Anna Hazare, Prashant Bhushan, former Karnataka lokayukta Santosh Hegde and Arvind Kejriwal, who was known as an RTI activist during those days.

The meetings would be held in the North Block which houses the finance ministry. Journalists would keep waiting for the meetings to end. After every meeting, any of the five ministers – except Mukherjee – and someone from the civil society – except Hazare - would brief the media.

On most of the occasions, I would invariably end up travelling with Kejriwal or Hazare in their car to get the "inside" news while deputy CM of Delhi Manish Sisodia would drive the car. We would reach the Maharashtra Sadan on Copernicus Marg where Hazare had put up during his visit to the capital.

After almost all meetings, I would be told that Mukherjee shouted at the civil society team on some of their demands. I also knew that Hazare had been included in the team from the civil society to keep a “check” on Mukherjee. They were aware of the latter’s infamous temperament. Hazare was kept to counter him.

I got the impression how much Mukherjee disliked Hazare, Kejriwal and their team. But he was helpless because of the public support they had.

Subsequently next year, Mukherjee was nominated as the UPA’s presidential candidate. The Jan Lokpal Bill was still in limbo. Kejriwal had made wild allegations against several leaders — from the ruling Congress as well as the Opposition BJP — calling them “beimaan” (corrupt). One of his targets was Mukherjee.

Mukherjee as president transformed into a different personality as far as his relations with the BJP, the RSS and the civil society are concerned.

His relations with Prime Minister Narendra Modi have always been more than cordial. Although almost all Congress leaders are staunch critics of the PM, Mukherjee has praised Modi on several occasions. He has continued to admire Modi even after his term as president got over.

As far as Kejriwal was concerned, despite the AAP convenor's unfounded allegations, Mukherjee would give a patient hearing to him and Sisodia. On their request, he had also taught children on a Teachers’ Day.

RSS chief Mohan Bhagwat had called on Mukherjee in Rashtrapati Bhavan. Now they are going to meet again. This time in Nagpur and they will talk to over 700 RSS cadres.

While the Congress, Left and others — who are against the BJP, the RSS and Modi — would blow hot and cold, not to mention the collective embarassment, Mukherjee has demonstrated that he has changed a lot in the past 15 years.

#Hindutva, #Nagpur, #RSS, #Pranab Mukherjee
The views and opinions expressed in this article are those of the authors and do not necessarily reflect the official policy or position of DailyO.in or the India Today Group. The writers are solely responsible for any claims arising out of the contents of this article.