Mogambo Khush Hua? What the arrest of Prashant Kanojia says about the rest of us

But, for the few who still care about dissent and the right to decide for their own selves, I challenge this.

Here’s some dirty Congress history to get things started.

The party banned Salman Rushdie’s Satanic Verses even before the book was out in the market in India and much before Ayatollah Khomeini in Iran declared a fatwa, calling for Rushdie to be killed. More recently, when the Congress-led UPA was in power, they slapped sedition charges on the cartoonist Aseem Trivedi in 2012 for replacing the lions of the national symbol — the Ashoka Chakra — with that of wolves in his caricature of the state as corrupt.

We have a long history of being told by our political leaders that we are easily offended and very volatile. And given our quick temper and propensity to display this on the streets, the state gives itself the right to arrest us equally easily, to prevent buses from being burned and people being hurt.

The present regime is underlining this long tryst with 'offenders' by arresting three journalists for tweeting about a woman who alleges she asked the Uttar Pradesh chief minister to marry her. This apparently offended the state — or so the UP police would have us believe. In typical shoot-the-messenger style, the government via the UP police swooped down not on the woman or on sites where the allegations were circulated, but on a freelance journalist Prashant Kanojia for tweeting about it. A lot has been written since the arrest on June 8, 2019, about the blatant violation of the law in arresting him and the owner and editor of a Noida-based news channel where the said tweet was discussed.

But there is a much larger political apparatus at work here that must be considered. The frequency with which the state steals our voice and claims to know us better than we know ourselves. Paternalistic, ever-present, all male, all-knowing. And if you want to picture this properly, think Amrish Puri’s eyes bulging out of their sockets as he strode across cinema screens of the '80s as Mogambo in Mr India. The state has been saying it for decades but we were iconoclasts. We shrugged our shoulders and defied The Parent.

Something seems to have set in with time and the homogenisation of information via WhatsApp and the social media, where we, the consumers of India, are not really people, just bots. We suck up stuff and deliver as ordered. If the state says, "I know this will offend you, so I am thinking on your behalf and arresting X," we don’t protest. We smile deferentially or curse in undertones as if to say, "Okay daddy, thank you very much." 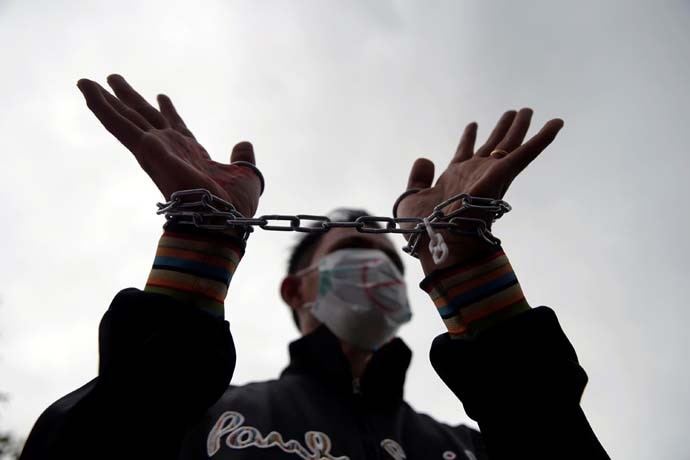 You're born free. But the rest of your life, you slowly accede. (Representational photo: Reuters)

This is the heart of the matter with the current arrests.

It sits in a world where our response to the over-reach of the state isn’t even a blip on the radar. So I speak for the few here that value dissent. I speak here to all those in the BJP who use the word 'Emergency' at the drop of a hat. That 21-month period from 1975 to 1977 when people woke up one morning to find their rights as citizens cancelled. Having dissented then and gone to jail, the BJP now seems to be aspiring to the same kind of draconian rule that Prime Minister Indira Gandhi once enforced — only in a cleverer way.

There is no big show here. No blacking out of Everything and All Spaces At Once.

Just one person at a time.

It’s a structural change that we are actually putting into effect each time we agree to let the state speak for us. Each time we allow an imaginary or real set of vandals become the signage behind which the rest of us hide. We the people that are apparently so easily offended. We are telling the state not to trust us. And in so doing, we are also plunging into a downward spiral of mistrust. We are breaking the republic tweet by tweet. Until we are lulled into a sweet stupor of conformity and complicity in our own take-over.

We are outsourcing our right to decide for ourselves what we find offensive and what we have the stomach for — and are coming to a general agreement that we don’t really care about the ceding of our right to think. Our right to differ. Our right to assert ourselves. Our voices. Our minds. Everything that begins with the word "ours" is becoming "theirs" instead. The ever-powerful, all-knowing state. This is what we are making.

And I am stating flatly here that I am deeply offended by it. And I will continue to assert my right to be disturbed, angry, upset and in turn, to offend.