Why just Hindi - President Pranab Mukherjee, what about India’s diversity?

His Excellency has announced that all official speeches in India would be in Hindi only from now on.

“India has always celebrated diversity and debate. Over 100 languages are spoken in India on a daily basis...” Exactly a month after President Pranab Mukherjee extolled the virtues of diversity at the India Today Conclave, he has taken an official step to stamp out diversity.

The president has just announced that all official speeches in India would be in Hindi only from now on. What else? Air India tickets would be printed in Hindi from now on and the national airline would stock up on Hindi magazines and newspapers for passengers. Etcetera.

All these are part of the 117 recommendations the Committee of Parliament on Official Language, which exists to make Hindi more popular. Since 1959, it has submitted nine reports to various presidents, the last one in 2011.

Ironically, it has taken a Bangla-speaking president to drive the Hindi language steamroller over India’s diverse linguistic heritage.

What would President Pranab Mukherjee have done, had Hindi been compulsory for all presidential speeches during his five years in Rashtrapati Bhavan?

The Constitution does not recognise any national language, but 22 “official” languages and three “classical” languages. Photo:

President Mukherjee’s Hindi reminds me of my mother’s (and she has not been a Delhi resident, hobnobbing with hundreds of Hindi-speaking politicians). In fact, Mukherjee’s Hindi is exactly like the movie stereotypes of the older generation of Bengalis speaking in Hindi: not-Bangla, not-Hindi, a strange lingo, with its own special vocabulary and usage.

On July 25, 2012, the day Mukherjee was sworn-in as the 13th President of India, he had made a fine speech — touching upon terrorism, democracy, secularism, the Constitution — in English. It was vice-president Hamid Ansari, who had then read out a Hindi translation of excerpts from his speech.

His last Independence Day address to the nation, on August 14, 2016, was also in English, dubbed and subtitled in Hindi on Doordarshan.

1. Did you know that Hindi is not India’s national language?

2. The Constitution does not recognise any national language, but 22 “official” languages and three “classical” languages.

3. India is seriously multi-lingual: according to the Peoples Linguistic Survey (PLS), India has 780 languages, of which just 122 are enumerated by the Census.

4. Statistics show that while Hindi remains the most spoken mother tongue in the country, nearly 60 per cent Indians speak a language other than Hindi.

6. Out of all those who list Hindi as their mother tongue, 40 per cent do not speak pure Hindi but in 49 tongues similar to Hindi.

7. What’s more, India is also losing languages faster than any nation on earth. The UNESCO lists 197 Indian languages as endangered or vulnerable, more than any other country. According to the PLS, we have lost 50 languages in the past five decades. That means extinction of history, world views, communities and culture.

8. The Constitution extends protection to minority languages as a fundamental right: “Any section of the citizens residing in the territory of India or any part of thereof having a distinct language, script or culture of its own shall have the right to conserve the same.”

President Mukherjee has a penchant for quoting Rabindranath Tagore. There is almost no presidential speech, where he has not quoted the poet. The good thing about it is that it gives him an intellectual aura missing in his peer group. 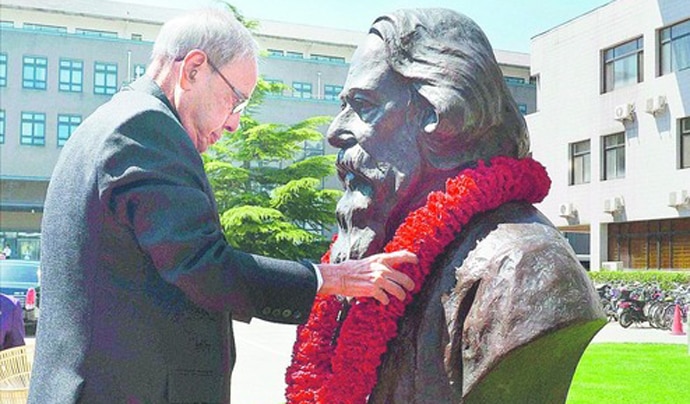 His Excellency would do well to remember Tagore's words. Photo: PTI

The quotes also sound so perfect that they validate the points he makes (a very old stage stratagem for public speaking used by Bengalis of his generation).

At a Hindi Divas celebration event in September 2014, for instance, Mukherjee talked about the importance of Hindi language for effective governance in the country. And he quoted Tagore: “All Indian languages are rivers and Hindi is the ocean.” Sounds great.

But Tagore’s thoughts on Hindi were much more complex. In letters to the Mahatma (National Language of India, 1918 and 1937), the poet wrote:

“Whatever the national convenience of a language that can facilitate inter-cultural communication in our country, it remains a mere convenience and cannot replace the value of one’s native tongue as a vehicle of intimate self-expression.

“I have in my institution at Santiniketan provision for the teaching of Hindi as well as Urdu.

“I hope those who have undertaken the lead in replacing English by a national medium of communication will realise their responsibility in this respect. I wish them all success.”

They say, the last gift is the best gift. It’s the gift of remembrance. It’s also irrevocable, because there is no other chance to make amends. President Mukherjee’s term ends in July 2017. His last gift, I must say, is a bit of a damp squib.

#Pranab Mukherjee, #President Pranab Mukherjee, #Tagore
The views and opinions expressed in this article are those of the authors and do not necessarily reflect the official policy or position of DailyO.in or the India Today Group. The writers are solely responsible for any claims arising out of the contents of this article.