There is no doubt that in India, there is very little space left for a free press and that space is shrinking fast.

The Central Bureau of Investigation (CBI) searched on June 5 the offices and home of NDTV promoters Radhika Roy and Prannoy Roy over allegations of defrauding the ICICI Bank and causing a loss of Rs 48 crore.

Though the Modi government maintains the usual “law is taking its own course”, the move is seen as muzzling one of the few liberal voices who are still struggling to survive in India’s media landscape.

Hindu nationalist Modi loves to hate liberal-leaning media. His paranoia for the free press is situated well in the past. His hatred towards journalists, particularly from English news outlets has taken shape since 2002. While the Gujarati media crossed all limits of responsible journalism and fed on the prevalent anti-Muslim prejudices during and post the Gujarat carnage period, the mainstream English journalists took Modi, then CM of the state, to task and kept exposing his omissions and commissions. That made him feel aggrieved and he continues to nurse a grudge.

He has been Prime Minister for three years but has not addressed a single press conference in India yet. Each month, Modi uses All India Radio to say his “Mann ki Baat” to promote some of his government’s policy.

He steadfastly ignores the mainstream national media, gives controlled access to only a few selective journalists and prefers to use social media to convey his version of the story. Modi’s tweets have become the primary news source for Indian media.

Modi’s social media presence can be the envy of any politician in the world. On Twitter, he currently stands second to Barack Obama in following among politicians. Though Obama has more than 90 million followers and from all over the world, Modi’s 30 million-plus followers are mostly from India and the Indian diaspora.

Twitter helps Modi directly reach a significant constituency of listeners, and he uses it as a channel to bypass the mainstream critical media.

Modi supporters and his party BJP never fail to blame the national media for its "biased" view against their leader. Modi calls the press "news traders" and one of his ministers has given journalists the vulgar epithet of "presstitutes".

However, besides a handful of media houses, most of the Indian media has either been bought over or forced to submission by the Modi government. Only a small number of journalists who are critical of his authoritarian brand of "Hindutva" politics are being regularly harassed by the regime and its supporters. 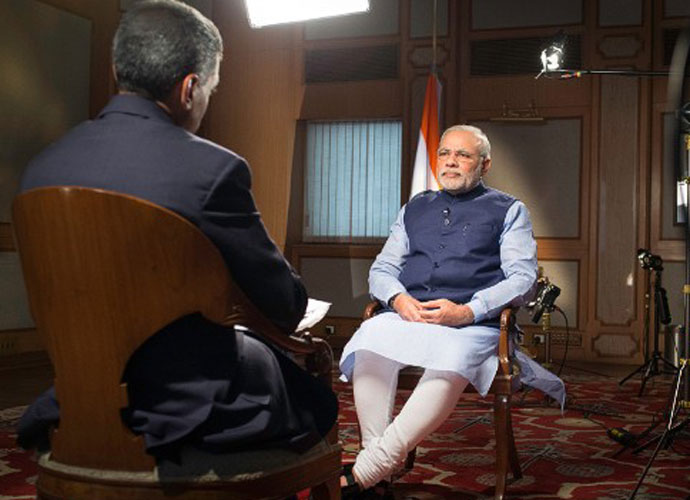 Besides a handful of media houses, most of the Indian media has either been bought over or forced into submission by the Modi government. Photo: CNN

US-based Freedom House rates India in its Freedom of the Press 2017 report as "Partly Free". In last year’s report, it was scathing in its criticism of the present regime for the pathetic state of the Indian media: “… media workers continued to face obstacles under Prime Minister Narendra Modi’s government. Journalists reported difficulty gaining access to government officials, and expressed concern over heavy-handed government censorship during the year. Journalists and writers reported receiving threats in connection with their work amid a national debate on whether there was rising intolerance in the country.”

Another international media watch organisation Reporters without Borders in its 2017 World Press Freedom Index has given India 136 ranking, three points down from 2016 and lower even than press freedom in Afghanistan.

Its report, under the headline of "Threat from Modi’s nationalism" describes the sorry state of India’s press freedom: “With Hindu nationalists trying to purge all manifestations of 'anti-national' thought from national debate, self-censorship is growing in the mainstream media. Journalists are increasingly the targets of online smear campaigns by the most radical nationalists, who vilify them and even threaten physical reprisals. Prosecutions are also used to gag journalists who are overly critical of the government, with some prosecutors invoking Section 124A of the penal code, under which 'sedition' is punishable by life imprisonment.”

There is no doubt that in Modi’s India, there is very little space left for a free press and that space is shrinking fast. Increasingly repressive state laws are being used to curb press freedom. There is also a shift in the nature of censorship in the country and right-wing organisations and leaders are misusing the law to curb dissent.

It is getting extremely difficult to say or publish anything against Modi in the Indian media. There is systematic harassment of any critical voice by the government, ruling party and its supporters. Modi is doing whatever he can to frame the agenda for the media and viciously pursuing the policy of unilateral messaging.

The media plays a critical role in democracies. Its task is to enable citizens to make informed decisions by providing them with a balanced picture of the complex world. The majority of Indian media is fast failing to do this job due to the fear of the regime and propagating ultra nationalist and anti-minority discourse in the country. This is affecting Indian society quite negatively.

In a liberal democracy, there are two key features which define the freedom of the press -freedom to investigate, evaluate and censure the system in which the press operates, and freedom from government intrusion.

On both fronts, press in India is suffering heavily now. Many media houses have already turned into the regime’s propaganda machine and those who are refusing to do so are facing all sorts of pressures to fall in line.

The lack of effective opposition has made Modi powerful already. However, forcing the media to be subservient is helping the authoritarian Modi to gradually destroy India’s key democratic institutions and to acquire all the power for himself.

When an authoritarian leader takes a decision, it might look bold and efficient, but it lacks checks and balances and suffers from the absence of a safety net. A regime which becomes dependent on the "wise" choice of a sole individual to mirror the interest of the whole country becomes a dangerous proposition.

There is no doubt that India’s Prime Minister Narendra Modi is a populist and polarising politician. Since his rise to national politics, there has been a fear among commentators and academics about his authoritarian temperament.

To negate the apprehension of Modi becoming an authoritarian leader, the usual argument by Modi supporters is that India is a democracy and Modi has come to power through one of the largest democratic exercises in history. However, it should not be forgotten what Plato had said - “dictatorship naturally arises out of democracy”.

Also read: We need to stand united with NDTV India

Post your comment
#NDTV, #Modi government, #Press Freedom
The views and opinions expressed in this article are those of the authors and do not necessarily reflect the official policy or position of DailyO.in or the India Today Group. The writers are solely responsible for any claims arising out of the contents of this article.