DailyOh! Priyanka Gandhi invites Anil Baluni for tea, to a CM who was turned away by a chaiwalla

What could Priyanka possibly tell Baluni over tea?

The news of what’s happening in Rajasthan is all over but Chief Minister Ashok Gehlot had doubts everything is reaching Prime Minister Narendra Modi. So, Gehlot dialled Modi and told him about what Governor Kalraj Mishra was doing; rather, not doing. Why would Gehlot think Home Minister Amit Shah hasn’t already told Modi? Honestly, we don’t know. But we do know about Gehlot’s complaint to Modi: Mishra is not calling the Assembly session.

When Uddhav Thackeray was on the verge of losing his chief ministership because Governor Bhagat Singh Koshyari won’t nominate him MLC and Election Commission won’t hold elections because of the raging pandemic, Thackeray is believed to have called Modi. The election was held soon after.

Why would Modi oblige opposition leaders? Because they who oblige shall also be obliged. You know what they say about not burning bridges. For now, Bahujan Samaj Party (BSP) wants to burn bridges with the Rajasthan Congress. It has issued a whip to its MLAs saying in case of a floor test, they will pull the rug from under Congress’s feet.

How many MLAs does BSP have in Rajasthan? None. Because all six joined the Congress last year. So who is the whip for? BSP MLAs.

BSP MLAs joined the Congress but BSP supremo Mayawati says there has been no merger, only defection. Defection is illegal, merger is not. To untangle the legal tangle, the matter is sure to reach court, unless the six decide to follow Mayawati’s whip.

The Rajasthan Congress is in crisis, but what preoccupies Rahul Gandhi? Patriotism. He says government is lying about Chinese invasion and bringing the truth to people is his form of ‘patriotism’. If everyone talks about Rajasthan, who will talk ‘truth’ to power? Rahul Gandhi hain na.

The Chinese have occupied Indian land.Hiding the truth and allowing them to take it is anti-national.Bringing it to people’s attention is patriotic. pic.twitter.com/H37UZaFk1x

The truth will come when it comes, or may never come, or it may already be here. Like beauty, truth too depends on the beholder. But coming to India are Rafale jets – not one, not two… but five. All five took off from Merignac base in France today. They land in India on Wednesday and that is when the jets will be officially inducted into the Indian Air Force at Air Force Station Ambala. Why so long? The jets will cover a distance of 7,000 km and stop for refueling in UAE.

Bon Voyage: Indian Ambassador to #France interacts with the Indian pilots of the Rafale. Congratulates and wishes them a safe flight to India with a single hop. #ResurgentIndia #NewIndia #Rafale@IAF_MCC @MeaIndia @rajnathsingh @Dassault_OnAir @DefenceMinIndia @PMOIndia pic.twitter.com/jk3IWD9tYU

Hammered into the Rafale jets are Hammer missiles that make them more lethal. The missiles can take out targets hiding even in bunkers in high-altitude areas like eastern Ladakh.

On the day Rafale jets took off from France, India hammered out 47 Chinese apps just a month after hammering out 59. It is alleged the 47 were working as clones of the 59.

There is an app for everything you need. There are multiples apps for all things you do not need. Oxford dictionary shows a very limited understating of what apps can do. It says an app is “a piece of software that you can download to a device such as a smartphone or tablet, for example to look up information or to play a game”. But you can also use an app to call a cab, get the house cleaned, appliances fixed, body massaged, pest controlled and grocery stocked.

Did you know that all apps have an Apple connection? The word app, our Word Of The Day, was popularised by Apple Inc when the company created the ‘App Store’ in 2008. This was a year after the first iPhone was released.

Soon app became the way to refer to mobile applications. App derives from the word application which means ‘practical use or relevance’. Now, application is also that formal request you submit to an authority or organisation, but apps seem more empowering because they get you what you want to have. Only you don’t always realise they take from you what you don’t want to give. Your data.

Kuch paane ke liye kuch khona padta hai? Yes, says Adnan Sami. The Pakistan-born singer says he was asked to perform for free during an award show to get an award during the show for free. Who triggered Sami? Shekhar Kapur. Who triggered Kapur? AR Rahman.

You know what your problem is @arrahman ? You went and got #Oscars . An Oscar is the kiss of death in Bollywood. It proves you have more talent than Bollywood can handle .. pic.twitter.com/V148vJccss

But talking of Sami has triggered us to talk about mausam. When mausam triggers you, go lalalala. If you can't croon light, let Sami do it for you.

What is a bheega mausam without chai and charcha? One notch lower than chai and pakoda. If it’s raining where you are, go for the kill. In Delhi, a chai invitation has left many doing nothing but craving for chai.

The invitation has gone out from Congress general secretary Priyanka Gandhi, current occupant of 35, Lodhi Estate house to Anil Baluni, the next-in-line to occupy the bungalow. It is customary for old residents to call over new ones for chai. Millennials shouldn’t try to find a connect here. First, they don’t know their neighbours. Second, they don’t connect over tea. 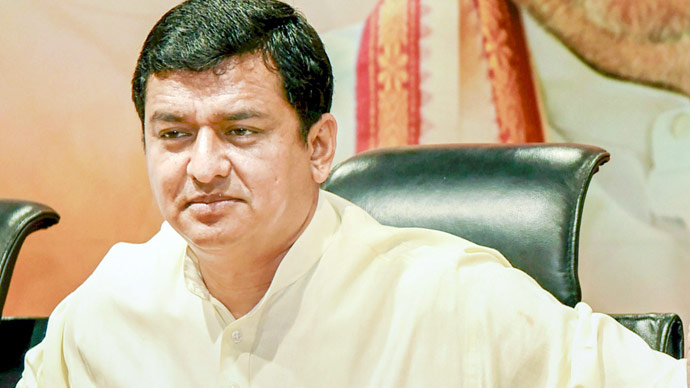 If Anil Baluni accepts Priyanka Gandhi's tea invite, this is where the meet will happen. (Photo: Reuters)

But there was a time when this neighbourly bonding over chai-biscuit was customary. Priyanka, however, is trying to bond with Baluni when she isn’t even going to be living in the neighbourhood. Maybe she just wants to say take care of the house. Maybe she wants to say nothing and just share a cuppa. Why read too much into this when there is so much to read outside of this.

But talking of tea, you might be amazed to know that a former chief minister was once turned away by a chaiwala. This was sometime in the late 1980s. A young BJP worker Laxmikant Parsekar turned up at a tea stall in north Goa’s Mandrem along with his group after a long day of campaigning for the party.

This was a time when BJP had no political significance in the state. Maharashtrawadi Gomantak Party (MGP) and Congress were the two main parties. When Parsekar and his group reached the tea stall, the owner said he won’t serve them tea because he was a supporter of MGP. MGP was Goa's first ruling party after the end of Portuguese colonial rule in 1961. Laxmikant Parsekar was Goa Chief Minister from 2014 to 2017. (Photo: Facebook)

Later, MGP formed an alliance with BJP but in Goa coalitions form and break faster than you can read this line. Parsekar was Goa CM from 2014 to 2017. It was a coalition government and part of the coalition was MGP. Later, of course, the alliance ended.

It’s okay to break an alliance, but to deny someone tea after a long day’s work – that is cruel, bordering on a criminal offence.

To check whether there is any element of criminality involved in the death of Sushant Singh Rajput, the Mumbai Police today questioned filmmaker Mahesh Bhatt. Since everybody in Bollywood seems to be linked to the case one way or the other, the Mumbai Police officials can call any star they want to see, seek autograph from or get clicked with. We are not saying that’s happening, just saying it is possible.

But did you watch Sushant’s last movie – Dil Bechara? If not, you can watch it when you want to watch it, but for now you can read how Sushant’s last swan song has turned out to be.

Talking of Bollywood, Aishwarya Rai Bachchan and daughter Aaradhya are back home after testing negative for coronavirus.

Thank you all for your continued prayers and good wishes. Indebted forever. 🙏🏽 Aishwarya and Aaradhya have thankfully tested negative and have been discharged from the hospital. They will now be at home. My father and I remain in hospital under the care of the medical staff.

But we will be back tomorrow.

Also Read: Why the Congress is on auto-pilot mode

#Rajasthan crisis, #Mahesh bhatt, #Sushant Singh Rajput, #Priyankagandhi
The views and opinions expressed in this article are those of the authors and do not necessarily reflect the official policy or position of DailyO.in or the India Today Group. The writers are solely responsible for any claims arising out of the contents of this article.