Even though comparing Sonbhadra with ashes and Priyanka with a phoenix is rather premature, she has exhibited that she has in her something that her brother lacked – hunger.

Ten villagers killed, 23 injured in a deadly clash over a land dispute by wanton firing allegedly by the village head and his men on Wednesday in Sonbhadra, the easternmost fringe of Uttar Pradesh.

But for the next 24 hours, no politicians attempted to visit from Lucknow.

Akhilesh Yadav was happy with a statement bashing Yogi Adityanath government. Mayawati released a three-page statement over IT department attaching benami property worth Rs 400 crore but not even a Tweet graced Sonbhadra.

Through the prime time, many BJP spokespersons accused Priyanka of playing politics over dead bodies. But, don’t we believe in ruthless politics where the result is what matters most? And the socio-economic background of the victims calls for political support to ensure justice. 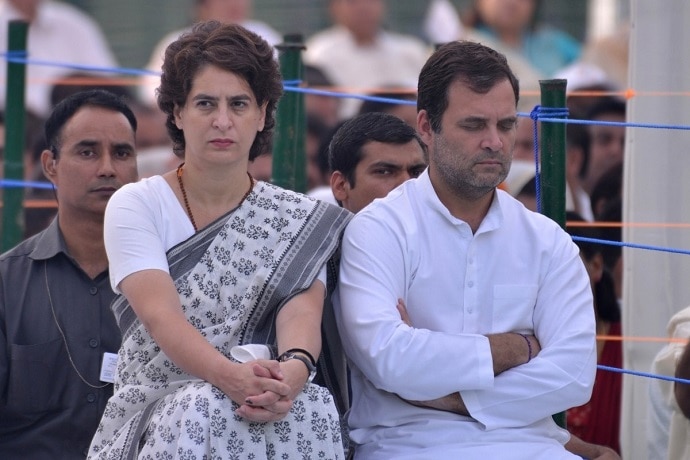 Priyanka Gandhi has what it takes to boost the Congress party's flailing spirit. (Photo: IANS)

As Tehseen Poonawala, who is married to Priyanka’s sister-in-law points out, “It’s not just her (Priyanka’s) duty but a legal and moral responsibility.” But her surprise dharna left the Lucknow politicians stumped, BJP fumbling and the Congress back in currency.

Make no mistake, Congress is going through one of its bleakest phases where the party president Rahul Gandhi was all too happy to resign and go abroad after a humiliating performance. The cadres are disillusioned by the headless chicken that Congress has become. Even in the Parliament, the clueless Congress doesn’t stay back till the division of votes after opposing a legislature.

Here, Priyanka Gandhi, at least showed she is hungry to sustain. Sonbhandra was at best a UP story but her visit made it prime time discussion topic with UP CMO on the defensive. However, comparing Sonbhadra with ashes and Priyanka with a phoenix is rather premature as well as immature.

But, she has exhibited that she has it in her that her brother lacked – hunger.

Let’s face it, a Gandhi alone can pull Congress out of the depression and hopelessness that is so akin to the iconic character of Devdas that took pride in letting himself slip into oblivion. While any sane mind would argue, and rightly so, to do away with the dynastic politics but the question remains - Who next? Captain Saab, who has excused himself from the race, or young Milind Deora, who can name ten best eateries of Paris but eventually fail in naming ten places of Bihar?

Like it or hate it, the word Gandhi works like glue for the Congress party to come together out of nowhere. An aimless, mission less and probably lifeless Congress seems to have suddenly got a new lease of life and a reason to fight for another day with the visuals of Priyanka on dharna in Narayanpur broadcasted across televisions in the country. Leaders in Delhi were smiling and cadres on the ground were given a reason not to quit the Congress, yet.

“The SP came to visit me and requested me to move to Varanasi citing no air-conditioning. I told him don’t need AC, I don’t need electricity. I will continue sitting here. I have come here to meet the aggrieved families. I will not return before meeting them. If they wish, they can put me in jail”, said Priyanka sitting on a road engulfed in darkness, as Friday came to a close and many of her colleagues in Delhi were getting ready to unwind.

BJP’s Nupur Sharma accused her of playing politics on a news channel. But what else do you expect a politician to do?

The problem with Rahul Gandhi was not the absence of playing politics but choosing issues that do not resonate with people. The alleged Rafale scam may be a good point of discussion while taking a walk on the manicured lawns of India International Centre but Gandhi could not ever make the electorate understand what the scam was in the first place. Praveen Dikshit, the much-hyped brain behind the idea assumed it will be a masterstroke, but any Congress cadre sitting in Amroha or Bhatinda were convinced they will fail in making sense of the complex issue during their door to door campaign.

And indeed, they failed.

Priyanka, on the other hand, understands some basics. Standing with the ten families in Sonbhadra will resonate across Uttar Pradesh. The SC/ST Commission of UP spoke out against this dastardly violence, it rocked the Uttar Pradesh assembly whose monsoon session just started and made another dent on the image of ‘Crime free Uttar Pradesh’. It didn’t require Congress to make anyone understand the complexities of a defence deal. Here all they needed was a Gandhi standing by the victims and Priyanka stepped into that shoe immediately. She is Congress’ best bet as the President, right now. It’s a virtual civil war in Congress’ Rajasthan unit, two key Andhra leaders including its minority cell leader joined BJP recently – Alpesh Thakor joined BJP, Gujarat in presence of state BJP president Jeetubhai Baghani and earlier in April, Rajasthan Congress Vice President Hari Singh too joined the saffron bandwagon. Recently, Mukul Roy has stated that as many as 107 MLAs are in touch with Bengal BJP and some of them are from Congress as well.

To make things worse, when Congress' trouble-shooter and senior minister DK Shivakumar went to Mumbai to meet rebel MLAs and courted arrest, Sanjay Nirupam was absent from the scene. To blame it on BJP will be stupidity because after all, they are an election-winning machine and not an NGO. The Congress right now is a house on fire and it needs a fix. Priyanka Gandhi is the only, and probably the best, fix they have. Is Priyanka Gandhi Vadra capable of pulling a Vajpayee move circa 1984? (Photo: ANI)

In 1984, the BJP could manage only two Lok Sabha seats. Young Atal Bihari Vajpayee was very upset with the turn of events and his shadow Lal Krishna Advani took him to watch a movie in Delhi’s Golcha theatre. A tale Advani would narrate many times to reporters in the coming years. Both returned home beaming with hope and positivity. The legendary poet in Vajpayee penned that night:

And the rest, as they say, is history.

Not to equate a seasoned politician with a reasonable newbie Priyanka Gandhi Vadra, but there’s hope for Congress to come out of the coma and if anyone can get the job done, it’s Priyanka herself.

#Uttar pradesh cops, #Congress lost, #Karnataka bjp vs congress-jds, #Dharna
The views and opinions expressed in this article are those of the authors and do not necessarily reflect the official policy or position of DailyO.in or the India Today Group. The writers are solely responsible for any claims arising out of the contents of this article.

The writer is a political journalist.