Priyanka Gandhi Vadra and the perils of dynasty

Dynasty can only take you so far in politics. It is a lesson that Priyanka will learn the hard way in the fullness of time.

Priyanka Gandhi Vadra’s formal debut in politics is the latest example of why Indian dynastic politics is regressive, entitled — and corrupt.

The first: even a democracy like the United States has political dynasts — the Bushes, the Clintons and the Kennedys. It's all about loving the family: Priyanka's formal entry into politics is proof to many of the Congress' reliance on dynasty. (Photo: AP)

Let me quote from a chapter 'Political Dynasties Beget Poverty' in my book The New Clash of Civilisations: How the contest between America, China, India and Islam will shape our century (2014).

“The first president of the United States, George Washington, took office in 1789. Since then, in 225 years and through 44 US presidents only thrice has a single family produced more than one US president: John Adams (1797-1801) and his son John Quincy Adams (1825-1829); William Harrison (who died in office after serving for just a month in 1841) and his grandson Benjamin Harrison (1889-1893); and of course, most recently the two George Bushes — exceptions that prove the centuries-old rule in American politics: dynasties don’t work. The purpose of democracy is to widen voter choice — not narrow it. By choosing dynasts over professionals, parties limit the choice voters might have had otherwise and lower the overall level of competence in Parliament.” They changed the world for sure: Father and son, and both former US Presidents, George HW Bush and George W Bush. (Photo: Reuters)

The die was cast when Jawaharlal Nehru, an unflinching democrat in public, turned out to be a closet dynast in private. He appointed his 42-year-old daughter Indira as president of the Congress in 1959.

The transformation of the Congress, from a party of freedom fighters into a family-owned enterprise, began barely a decade after the Mahatma said it should be disbanded after Independence and remoulded as a party relevant in a democratic India, not a British colony.

While Nehru, a refined and sensitive man, took the first hesitant steps to introduce dynasty in India, Indira Gandhi cast it in stone.

It is a misnomer to call Priyanka Vadra’s formal entry into politics her 'debut' — that conceals the truth. Long compared to her grandmother for political nous, Priyanka has been politically active since 1991 when she was just 19 years old. Throughout the 1991 Lok Sabha election, Priyanka campaigned tirelessly for her father Rajiv Gandhi. 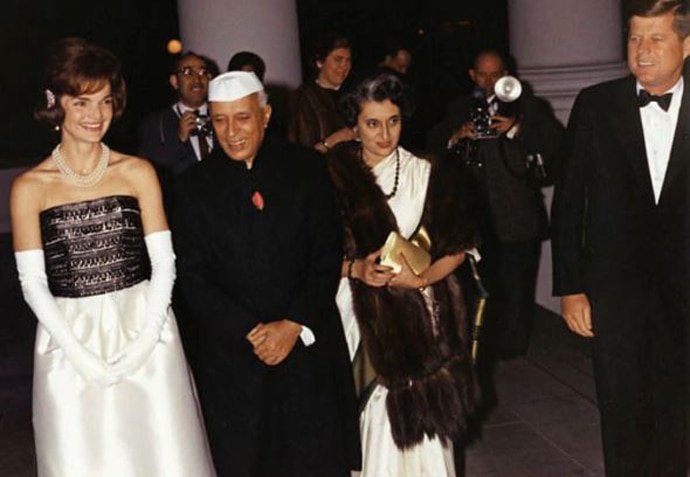 The Nehrus, the Kennedys: The transformation of the Congress began with Jawaharlal Nehru who appointed his daughter its President. (Photo: AP)

Again, it was Priyanka (brother Rahul was away in the United States) who flew to Chennai in the early hours of May 22, 1991, along with mother Sonia, to bring back her father’s body to Delhi in a special aircraft from Sriperumbudur, the temple town where Rajiv was assassinated.

She showed steel then, comforting her mother, standing by her brother when he flew back from the US, and appearing composed during the funeral. Over the next nearly 30 years till today, Priyanka has remained a strong but silent presence.

When the Congress was decimated in the Lok Sabha election in 2014, a photograph of her walking back home with a comforting arm around Rahul’s shoulder, captured her role as the family’s quiet, behind-the-scenes support system, absorbing everything, awaiting the right moment to emerge from the shadows.

But even in that quiet phase, her writ ran large over the Congress.

The decades-old clamour from Congress loyalists for her to enter politics never died down. In the 2017 Uttar Pradesh assembly election, Priyanka played a key role in selecting candidates. Loyalists shielded her, as they did Rahul and Sonia, from criticism following the Congress’ humiliating defeat in UP as the BJP coasted to a landslide victory. Priyanka: For years, she was known as the Gandhi family's behind-the-scenes support system. But she was in fact much more. (Photo: PTI)

But make no mistake. Behind Priyanka’s easy demeanour lies a shrewd mind.

Her marriage in 1997 to Robert Vadra, then a small-time businessman, surprised many in her closed circle. Within a decade, Vadra had transformed himself into a real estate mini-tycoon, cutting deals, sculpting himself at gyms, and gate-crashing Delhi’s nouveau riche Page 3 circuit.

It was evident even back then, a decade ago, that Vadra would pose the biggest risk factor to Priyanka’s putative political career.

Vadra’s reportedly controversial real estate dealings began to be exposed in the early 2010s by investigative journalists in leading newspapers. The Congress-led UPA government was still in power.

Vadra had become an embarrassment.

Worse was to follow. Investigations in Haryana and Rajasthan over the past few years revealed shady real estate deals. Multiple charges have now been levelled against Vadra by the Enforcement Directorate (ED). Vadra has undergone nearly 20 hours of grilling by the ED.

The email trail between Vadra and his former aide Manoj Arora has purportedly revealed links with 'benami' properties in London bought allegedly with money laundered from kickbacks in petroleum and defence deals during 2005-2010.

That was a steroid-driven period for the UPA1 and UPA2 governments, replete with alleged scams in telecom spectrum, the Commonwealth Games, AgustaWestland VVIP helicopters and Scorpene submarines. The ED’s interrogation of Vadra could reveal his alleged links with absconding arms dealer Sanjay Bhandari.

Bhandari was pitching the Eurofighter against the Rafale during 2007-2012 — but kickbacks were allegedly not forthcoming. The negotiations for buying a medium multi-role combat aircraft (MMRCA) mysteriously ground to a halt in 2012.

These are serious political landmines for Priyanka.

Apart from the ED’s allegation of Vadra laundering bribes from illicit deals, Priyanka will have to confront the challenges of an India increasingly hostile to political entitlement and privilege.

Having inherited her native shrewdness from mother Sonia, Priyanka has cultivated an image of the stoic victim standing by her persecuted husband, forgiving her father’s killers, subtly playing up her likeness to grandmother Indira Gandhi. 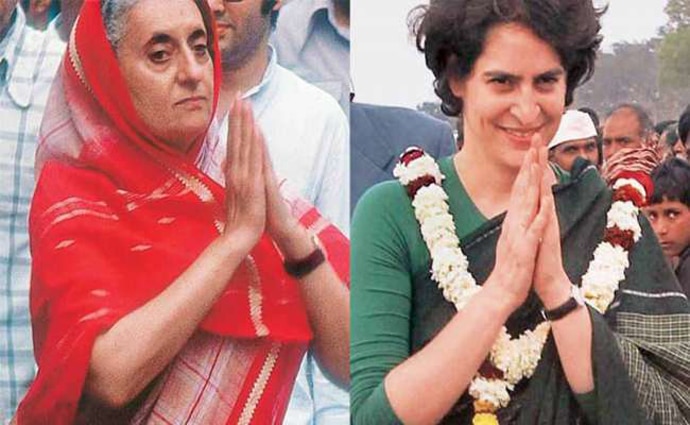 Since her foray in politics, the Congress has been playing up Priyanka's likeness to grandmother Indira Gandhi. (Photo: DailyO)

Priyanka, like Rahul, has never held a real job — apart from voluntary NGO work. She is now the party’s operational number two after Rahul, leapfrogging over Congress leaders who are decades older.

But, despite her road show with Rahul in Lucknow on February 11, the family has lowered expectations of Priyanka’s impact in Uttar Pradesh by saying she is expected to make only a long-term difference. That’s wise.

Amethi and Rae Bareli, despite being Nehru-Gandhi fiefs for over 60 years, are backwaters unlike the constituencies of other less heralded leaders. If elections were fought on development alone, both Rahul and Sonia (and Priyanka when she inherits Rae Bareli) could lose.

Fortunately for them, elections in India’s feudal backwaters are fought on emotion — not development. Priyanka’s formal political entry has ensured that the Congress will win at least two Lok Sabha seats in Uttar Pradesh in May 2019.

Dynasty can take you that far though — but no farther. It is a lesson political dynasts across parties, who have gleefully followed in the footsteps of the Nehru-Gandhis, will learn the hard way in the fullness of time.

#Uttar Pradesh, #Lok Sabha 2019, #Narendra Modi, #BJP
The views and opinions expressed in this article are those of the authors and do not necessarily reflect the official policy or position of DailyO.in or the India Today Group. The writers are solely responsible for any claims arising out of the contents of this article.