Why Prophet Muhammad is said to be the first Sufi

It's our ego and our insecure minds that are hurt, not God or his messenger.

On any given day, one can see hordes of people flocking to dargahs in the subcontinent. What is it that draws them to Sufism?

In a world that is becoming more and more materialistic and aspirational by the day, material desires are mounting and the inability to realise them leads to frustration. Do people flock to dargahs, ashrams and even retreats seeking the fulfilment of desires, or does Sufism offer something more?

As someone who does visit dargahs, I would like to examine the relevance of Sufism in our time.

Like many others, I too started going to dargahs to seek the intercessions of the saints buried in the shrines called Auliya (plural for friends of God) - and who better to intercede for me than God's friend?

Over a period of time, it was a sense of calm and peace I got there that made me return to the sufis each time. I became more spiritual than religious for I felt that religion without spirituality was limited to just simple rituals.

Paying obeisance at the temple or mosque or church gets us nowhere unless we look deep within and discover our spiritual side. It just hardens our hearts and this excess makes us rigid, burdening those around us with inconvenience and grief.

That is why Sufism is important today. It is the mystical or spiritual aspect of Islam.

Since childhood I have heard a famous anecdote about Ali ibn Abu Talib, the cousin and son-in-law of Prophet Muhammad:

Once, as Ali was about to embark on a journey, a man came running to him and said, "O Ali what is the essence of Islam?"

Ali had one foot in the stirrup and was about to swing the other over the horse as he said, "Believe in the Oneness of God and serve his creation," and rode off.

That in a nutshell is the essence of Sufism, the service of mankind. For them Allah is Rab-ul Alaameen or God of the Universe as stated in the first Surah of the Quran and not the narrow definition of Rab-ul-Muslimeen or the God of Muslims. 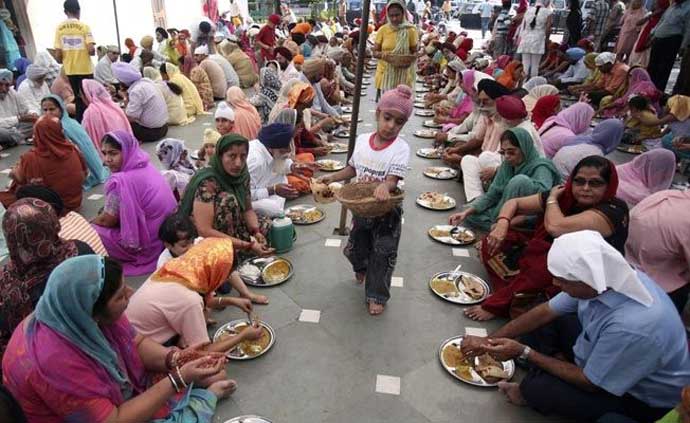 Come calamity, gurdwaras world over are there to lend a helping hand and offer langar or free meals. Photo: Reuters

Incidentally, the three major orders of the Sufis, that is Chistiya, Qadriya and Suharwardi claim descent from Ali ibn Abu Talib.

Charity is essential and should be practised regardless of caste or religion.

He indeed is a true devotee, blessed with the love of God, who is gifted with three attributes:

1. River-like charity; that is his sense of charity has no limits and is equally beneficial to all the creatures of God who approach him;

3. Earth-like hospitality, that is his loving embrace may be open to all, much like the Earth's.

Today, gurdwaras practise this in every part of the world. Come calamity, they are there to lend a helping hand and offer langar or free meals. Sufis place great emphasis on ihsan, which literally means benevolent action or as the Prophet explained, to worship Him as If we can see Him and even if we can't see him to know that God can see our actions at all times.

In the subcontinent, dargahs and khanqahs were famous for their langars - and while the Ajmer Sharif continues its daily distribution of gruel cooked in huge pots donated by Mughal emperors Akbar and Jahangir, from the offerings of grain and money by devotees, other dargahs do it during Ramzan and Islamic festivities.

But, perhaps, the most important lesson that Sufism can teach us is its basic principle itself: That to love one's fellow beings is to love God. Once we believe in this, the narrow perceptions of faith become meaningless.

Sufis place great emphasis on ihsan, which literally means benevolent action or, as the Prophet explained, to worship Him as If we can see Him and even if we can't see him to know that God can see our actions at all times.

The Prophet was famous for his gentle ways and gracious dealings. He is said to be the first Sufi, and Sufis draw inspiration from his courteous manners or ikhlaq.

Today, when we are so ready to take offence at every kind of perceived offence in the name of the Prophet, it is important to remember how he responded to insults.

The Prophet's character is summarised by Imam Al Ghazali (1058-1111 CE): "He was far from knowing anger and quickly showed compassion for things. He was the most loving of men toward other people. He was the most auspicious of men and did the most good to others, and the most useful and beneficial to others."

He was sent as Rahmat ul Alameen or mercy for the world.

And it is this Prophet in whose name we perpetuate violence because someone utters or draws something offensive. The best way we can honour him is by emulating him, but not with anger or hate.

God - or his messenger - doesn't need our help to protect his image. It's our ego and our insecure minds that are hurt not God.

This sense of security comes with the spirituality preached by Sufi masters and not by practising mere rituals without understanding their essence.

Sufis teach us inclusiveness, humanity and the quality of mercy.

"The saints will cast away both worldly and religious blessings to give a piece of bread or a drink of water to someone in need. This state is something one cannot obtain by one hundred thousand fasts and prayers."

Baba Farid had said: We Sufis are not knives that cut and divide but needles, which darn and join two different ends to each other.

Today, we need those very needles to darn our torn social fabric, now more than ever.

Dargahs are places of refuge for all, irrespective of race, religion or class.

We need that healing touch in religion once more so that we can give up the extreme positions that so many among us are taking up in their lives.

#Religion, #Sufis, #Prophet Muhammad
The views and opinions expressed in this article are those of the authors and do not necessarily reflect the official policy or position of DailyO.in or the India Today Group. The writers are solely responsible for any claims arising out of the contents of this article.