The one who commits a crime

And the one who allows it

Let disgust burn them both

This is not my demand alone.

Even as I write this article, there are reportedly several projects in the pipeline featuring Pakistani singers, character artistes, technicians, etc.

What's more unfortunate is a section of Indian artistes continuing to engage with Pakistani artists and taking part in cultural forums in Pakistan because they apparently feel that the border skirmishes are best left to the armies to decide. 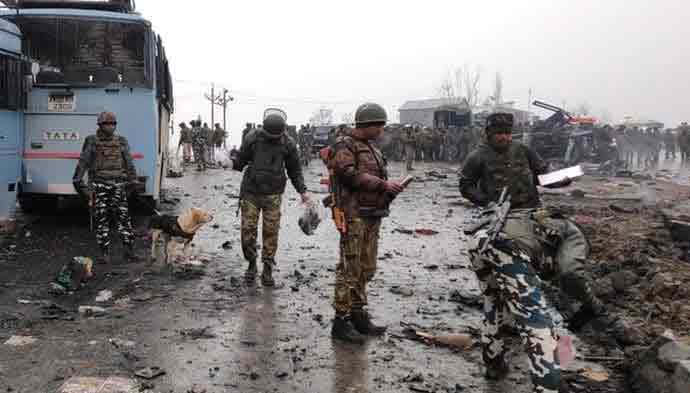 Make no mistake, the Pakistani deep state is involved in this. And in the cultural forums where Indians are invited too. (Photo: Reuters)

Indian artistes and performers have continued to travel to Pakistan all these years to prove a point — people to people contact will increase affection between the two warring nations. Another argument from the Indian side is that terrorism is a global menace that has affected India and Pakistan equally in the Asian sub-continent. Hence, it is necessary that the people of the two countries stand shoulder to shoulder with each other during trying times.

Apart from the amazing hospitality and food that the Pakistanis reportedly provide the Indian artistes, there has also alongside been an uncanny silence from them on the issue of terrorism.

They (the Pakistanis) even take utmost care that the Kashmir issue is not discussed on fora where Indian artistes are invited. These platforms of art and culture are insulated to their media's obsession with India and more particularly, the deep dtate's obsession about acquiring Kashmir from India.

Things have been continuing like this for decades now, with the standard argument being: 'Let us not stop art for what is happening at our borders. Let art remain borderless'.

Javed Akhtar and Shabana Azmi were some of the most fervent believers of this "Aman Ki Asha"-esque concept and were indeed often at the forefront of it. It was not at all news for us when both of them traveled to Pakistan to take part in cultural programmes.

But the Pulwama terror attack finally shook their conscience.

Shabana Azmi ultimately stalled one of her visits to Pakistan and spoke about the futility of people to people contact when the governments are at war.

Though she hasn't lost her faith in the people of Pakistan, it seemed she has understood that the Pakistani cultural brigade never addresses their government's open terror policy and vice versa.

I am filled with pain and grief and all else ..by the dastardly #Pulwama attack . For the 1st time in all these years I feel weakened in my belief that people to people contact can force the Establishment to do the right thing.We will need to call halt to cultural exchange

Javed Akhtar in a tweet also declared that he cannot attend a cultural exchange at Karachi.

When a Pakistani questioned Javed Akhtar about why he was holding the people of Karachi responsible for the actions of "others", Javed finally said what many Indians have been pointing out relentlessly — that the Pakistani intelligentsia speak of peace but they never hold their government responsible for their policy of terror.

Dont get upset with me. talk to those who are running your country , who are protecting and nurturing terrorists like Masood Azhar . Those who had sent Qasab to my city . If you are getting a terrible reputation they are responsible no one else .

Once Javed Akhtar and Shabana cancelled the event, the Karachi Arts council showed their true colours — and were reportedly quick to condemn the couple publicly.

Never mind how the Karachi Arts Council exposed themselves though, the issue Javed Akhtar has raised is the moot question here.

Will you, as an Indian, allow yourself to remain insulated to the fact that Pakistani terrorists are openly threatening Indians and attacking our soldiers? Will you drop loaded terms like "world peace", "give peace a chance", "love without borders", etc., and turn a blind eye to the fact that Pakistanis don't actually talk about its deep state organising systematic jihad operations in India, which is actually a 'covert war' and that's on top of the agenda in the highest echelons of the Pakistani army?

For example, how many among Pakistan's cultural brigade have put up a petition about handing over Masood Azhar or Hafiz Sayeed to Indian law enforcement? How many among the Pakistani cultural icons talk about how Pakistan-trained terrorists are launched from well-equipped terror camps near PoK? How many Pakistanis talk about the Mumbai terror attacks or Uri attacks where the terrorists were carrying Pakistani army grade weapons? How many ask from where the terrorists get their unlimited supply of weapons and ammunitions from?

Okay, so now that we know most Pakistanis can't care less about terrorism in India, then you have a right to know why the Pakistani deep state turns a blind eye to these particular cultural events.

Of course there is a reason why Pakistan readily grants visas to Indian artistes or never questions these joint cultural forums where Indian and Pakistani artistes come together.

These people to people contacts are a great way to show to the world that Indian intelligentsia doesn't subscribe to the views or efforts of the Indian government in isolating Pakistan at all levels for terrorism.

Which is also a way of saying that the Indian government doesn't have the support of many Indians — liberal Indians — in the narrative that Pakistan foments terror in the sub-continent. The Pakistani deep state gains a positive image from Indo-Pak cultural exchanges. These legitimise them, despite their terrorism. (Photo: India Today)

The reports and coverage of the art and cultural events actually convey that Indian artistes and cultural ambassadors care two hoots about the narrative of the Indian government.

My dear Indian intellectuals, we ourselves know that the above statement is not true — but I hope that you have understood by now how you are hurting your country by taking part in Pakistani cultural forums. You're helping Pakistan establish a counter-narrative, wherein you appear as going against the very narrative of your own country about Pakistan being a mother ship of terror which should be isolated at all costs.

Every time a report or a picture of yours comes out in a Pakistani daily, it provides credence to the fact that Indians apparently believe that Pakistan is not involved in terror activities happening within India.

The messaging is obviously not overt but subtle. Yet, it hits home.

The Pakistani deep state is basically gaining a positive image from these Indo-Pak cultural exchanges — that is why it is not only allowing but facilitating these in multiple ways.

My appeal to everybody belonging to the different art and cultural activities in India — please support the Indian government's plea of boycotting Pakistan at all international forums.

We should put a full-stop to all kinds of cultural exchanges with Pakistan.

Let's not help Pakistan establish a narrative that helps them at international forums. It's time to shame Pakistan at all forums — games, culture, trade, films — anything that you can think of.

If you are Pakistani and you haven't yet stood up to your government's wretched policy of terrorism, then you should take some part of the blame too.