Pulwama Attack: In anger and anguish

Terrorist attacks of this nature do not happen overnight. The signs were all there. And there's more to be deciphered.

This is being written in anger and anguish.

One truck in a convoy of 70 trucks was attacked by a suicide bomber in an assault that has killed at least 40 CRPF jawans. The terrorist, an indigenous Kashmiri, had rammed his explosives-laden car into the lead truck. More will die, as their conditions are critical. Many CRPF jawans have been killed in this dastardly assault. Several are critically injured. (Photo: Reuters)

This attack is bigger than Uri, and Jaish-e-Mohammed, Pakistan's current favourite in Jammu and Kashmir, was quick to claim responsibility.

But will these deaths become yet another statistic in our endless war against terror?

Lt General (retd) Amjad Shoaib, who was Director, Military Intelligence of the Pakistan Army for some time, was speaking in an interview three months ago with the well-known Pakistani TV commentator Hamid Mir. The General had predicted that suicide bombings by Kashmiris would inevitably be the next stage of terrorism in Kashmir. His argument was that once the Kashmiri youth realised that the only way forward was to kill and be killed, he would resort to this.

Kartarpur was a charade, a red herring. This is Pakistan's usual pattern of one step forward, two steps back. The Deep State has again retaliated, especially when Imran Khan said he and the Pakistan army were on the same page and we were exulting at the prospect of an outbreak of peace. Therefore, Kartarpur has been countered with Pulwama. There have been several similar episodes in India-Pakistan relations in the past. Prime Minister Vajpayee did the Lahore Bus Yatra - and the Pakistanis organised the hijacking of IC 814 in December 1999. Narendra Modi met Nawaz Sharif in Ufa, Russia, on July 5, 2015 and Nawaz came away without mentioning Kashmir. This had to be 'rectified' and there was a terrorist attack in Gurdaspur. Undeterred, Narendra Modi paid a surprise visit to Lahore to attend Nawaz's granddaughter's wedding in December 2015. The Deep State frowned at this camaraderie and we had a terrorist attack in Pathankot in January 2016.

Then there was the Uri terror strike in September 2016, followed by an Indian punitive strike ten days later — and Pakistan responded with a terror attack in Nagrota in November that year.

The more favoured terrorist group in Kashmir for the Pakistan establishment currently being JeM, this is probably signaling its coming of age in the Valley.

Lashkar-e-Tayyaba (LeT) is currently deployed elsewhere -—and may be helping the Taliban in Afghanistan. Let us not forget that Masood Azhar, the JeM leader, was in our custody till we let him go, following the IC 814 hijack in agreement to demands from the terrorists in December 1999. 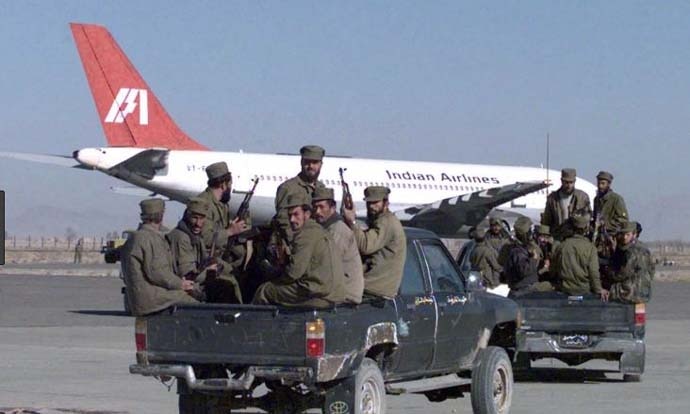 The hijacked IC814 episode which led to the freeing of Maulana Masood Azhar from Indian prison to Pakistani freedom. (Photo: Reuters)

More such attacks are possible.

Terrorist attacks of this nature do not happen overnight. They take time to organise and plan.

There will, therefore, be several questions about the how and why of this attack. An attack on the main highway, in broad daylight, against a convoy must have taken some planning; there must have been advance information and the terrorist had minute-to-minute information about the convoy's movement. He would have selected a precise location from where to move and strike. They had the capability to put together an attack at short notice. He was not alone in the planning and somebody acquired the explosives. The terrorist must have been familiar with the terrain and confident of travelling. Also, someone should ask — why move so many vehicles together, what were the reasons and security precautions. In its video of the Pulwama suicide bomber, the Jaish-e-Mohammed claims discredit for the dastardly attack. (Photo: Twitter)

Terrorist attacks of this nature do not happen overnight. They take time to organise and plan. After the Burhan Wani encounter, the LeT and Hizbul Mujahideen came to an agreement and started running joint operations and sharing logistics. The alliance was mutually beneficial as LeT gained easy access and movement in the villages of South Kashmir. JeM was on its own. One factor that set JeM apart from the Hizbul Mujahideen was their reliance on social media - both LeT and Jaish terrorists have made good use of social media for propaganda and luring more recruits.

However, in the last few months, the social media presence of the JeM grew rapidly. JeM forums began using encrypted messengers spinning out propaganda videos, audios and literature, particularly its weekly newspaper and books written by Masood Azhar. Jaish started claiming responsibility for its attacks through these encrypted chat messages. These chat forums appear to be a part of an unbridled PR machinery to gain popular support which the group has always lacked.

Another important signal that probably has gone unnoticed.

Local Kashmiri recruits have so far been fairly unsuccessful in inflicting terror, mostly because of poor training and inadequate resources. These recruits could hardly sustain themselves for a few minutes during attacks and encounters. Another unnoticed trend has been the fading away of LeT in the Kashmir valley after Pakistan was put on the FATF list. The international fame of LeT does certainly not help Pakistan in its attempts to get off the FATF grey list. This explains why the JeM has made a quiet entry into the Kashmir Valley and with this latest startling attack, made its intentions of becoming a nightmare for the Indian security establishment, which the home-grown Hizbul Mujahideen failed to do.

While we will hear loud proclamations from politicians of being "hard on terror" and the mandatory chest thumping for killing of "highest number of militants" will continue, a new game is unravelling in the Valley.

The Afghan peace talks and the legitimization of the Taliban will certainly add to the complications now.

Also Read: We could see Pulwama coming – and there’s more to follow

#Suicide attack, #Jaish-e-mohammed, #Kashmir, #Pulwama attack
The views and opinions expressed in this article are those of the authors and do not necessarily reflect the official policy or position of DailyO.in or the India Today Group. The writers are solely responsible for any claims arising out of the contents of this article.