It's a humbling exercise for Gen Singh and an uplifting for Jarnail Singh.

In April 2009, a soft-spoken journalist hurled a shoe at the home minister in anger over the Congress party's nomination of Jagdish Tytler.

In the aftermath, Punjab's Akalis were quick to project him as a Sikh poster boy for injustice over the atrocities of 1984.

As is characteristic of Badal loyalists, they walked away from him shrewdly after exhausting the media coverage and TV debates surrounding journalist Jarnail Singh's mild shoe attack on P Chidambaram.

But the arrival of Arvind Kejriwal's Aam Aadmi Party (AAP) on the wave of mounting public outrage at the Congress' alleged acts of corruption opened a new chapter in Singh's life.

A political innovator, Kejriwal turned the journalist into a prominent Sikh face of his newly-launched AAP.

In 2014, the Aam Aadmi Party leader fielded him as a Lok Sabha candidate from West Delhi. Singh lost that election, his maiden, to the BJP's Pravesh Sharma by a huge margin.

But a year later, he debuted into Delhi's Assembly as an AAP MLA. 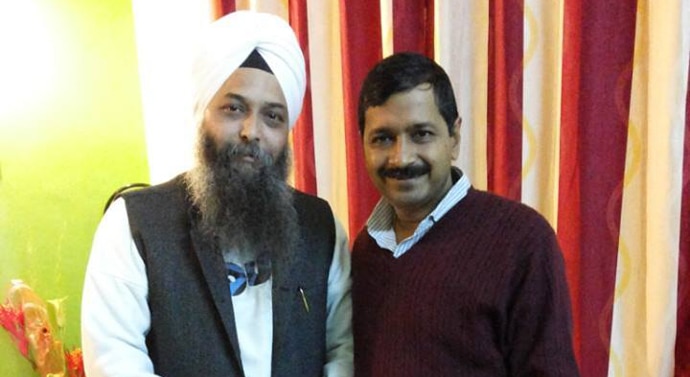 Jarnail Singh's political career has undoubtedly been ascending in the AAP fold since 2014. Photo: Sikh24

And this year, Kejriwal named the 43-year-old former journalist as his party's candidate from Lambi, the constituency of Punjab chief minister Parkash Singh Badal, a borough the Akali veteran has been winning hands-down since 1997.

Whether Jarnail Singh will defeat Badal Sr is beside the point, the mere fact an MLA from Delhi, with barely two years of political experience, is fighting a stalwart of Punjab in the Akali stronghold raises his stature considerably.

Singh's political career has undoubtedly been ascending in the AAP fold since 2014.

But it's utterly flabbergasting if a former army chief chooses, as news reports suggest, a political battleground from a corner of the state as his next career.

If Gen Joginder Jaswant Singh has indeed made up his mind to run for MLA from the Shiromani Akali Dal, he's either too ambitious or has plainly succumbed to the make-believe that he could be a giant slayer. Let's assume Patiala's captain lost to the general, what still would be the status of the former first Sikh chief of the army staff? Photo: Reuters

Gen VK Singh climbed the political ladder when the Modi magic enamoured India. Gen JJ Singh, on the other hand, appears to have jumped into a ship that looks destined for the bottom.

Let's assume for a minute the Akali ship hasn't sunk, but cruised into a historic third term. And let's assume Patiala's captain lost to the para-dropped general, what still would be the status of the former first Sikh chief of the army staff?

As an MLA, he would always be ranked lower than the chief minister in protocol. Remember, Gen JJ Singh was also the president's appointee as governor of Arunachal Pradesh.

Now, he's settling at best, if he does, for one of 117 positions of Punjab legislators. Surely, that's a bit too humbling.

#Akali Dal, #AAP, #Assembly elections 2017
The views and opinions expressed in this article are those of the authors and do not necessarily reflect the official policy or position of DailyO.in or the India Today Group. The writers are solely responsible for any claims arising out of the contents of this article.