There’s a key difference between Bofors and Rafale. That may be the BJP's battle strength, despite it losing a war of words.

“Bofors was a scam, Rafale is not. Bofors sank Congress, Rafale will bring Modi back to power.”

While this comment by defence minister Nirmala Sitharaman is hyperbole, how much the Rafale issue resonates with voters in 2019 does remain open to question.

Will the Rafale deal cost PM Modi dear in the General Elections — or is it just much ado about nothing? 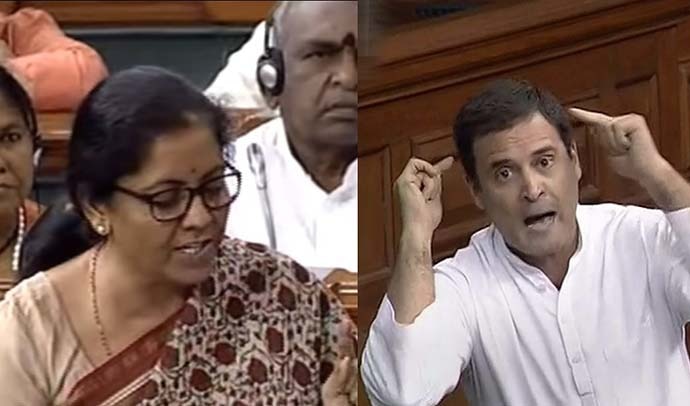 Much ado about nothing? Parliament has seen several stormy uproars over the Rafale issue. (Photo: Twitter)

Parliament recently saw a dogfight over the Rafale controversy — which the government claims is no longer a ‘controversy’, since the Supreme Court has dismissed a plea for a probe into it.

But the Congress continues to sharpen the deal as a poll tool for 2019. Last week, Congress president Rahul Gandhi initiated a debate on the deal in the Lok Sabha. It was followed by an acrimonious discussion, with finance minister Arun Jaitley hitting out at the Congress for having a “legacy of scams”.

The defence minister too put up a valiant defence, rebutting the Congress charges with figures and facts.

But the slugfest continues on social media.

The Congress is now asking all its leaders to tweet questions to PM Modi, calling it “do sawaal, do jawaab”… “Who gave Anil Ambani the offset contract? Did the defence ministry object to the new deal?”

RM spoke for 2 hrs. in Parliament, but she couldn't answer the 2 simple questions I asked her. Watch & SHARE this video. Let every Indian ask the PM & his Ministers these questions.#2SawalDoJawab pic.twitter.com/YR8zuyO6Al

The video tweet shows Rahul asking two questions, labeling them ‘Q1’ and ‘Q2’, and each is followed by flashes of a solemn Sitharaman sitting silently and sipping water as “response”.

The Congress President has reportedly asked party leaders to scale up the campaign now and take the point to the common person on the street that the ‘government is not answering questions on pricing and procedure’ and there is apparently ‘something suspicious’ about the deal.

The Congress recently also dropped a bombshell when it released the audio of a purported telephonic conversation between an anonymous man and a Goa minister. The party, however, refused to get the authenticity of the tape tested.

All through last week, in political rallies and in Parliament, allegations of corruption and wrongdoings flew thick and fast. In the Supreme Court, a review petition over the issue was filed.

Amidst all the fuss, the common citizen remains as confused as ever. For now, the 'janta' seems to be choosing its position on the deal on the basis of their political ideologies.

There are few people who understand — or want to go into the technicalities of the deal — even though defence experts and defence journalists have been explaining the issue over and over. 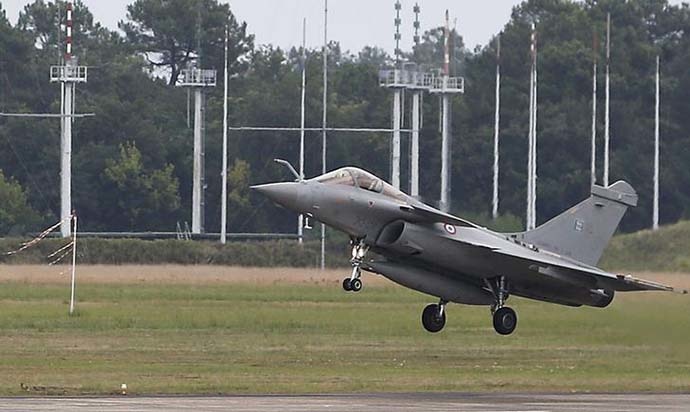 Too much hawaa: The finer details of the jet deal are still flying over the heads of many. (Photo: Reuters/file)

Politically, this is a perception game.

When Sitharaman says that the Bofors scam brought down the Rajiv Gandhi government, she is right. In the Bofors scam, the money trail led to Ottavio Quattrocchi, considered close to Rajiv Gandhi, but not directly to Rajiv himself. Yet, it was the perception game that harmed his government in the election.

It’s election year again — and the Congress is using the Rafale issue to keep throwing mud at the government, hoping some of it will stick.

What was interesting last week in Parliament was that what started as a solo campaign by the Congress was soon joined by a host of political parties — from the BJP’s virulent opponent the Trinamool Congress to a fence-sitter like the BJD to a ruling ally, the Shiv Sena.

The Sena, in fact, has been virtually echoing whatever Rahul Gandhi is saying, including the demand for a JPC probe. Though, of course, it must be pointed out that all these parties are facing strong existential threats from the BJP — the Sena in Maharashtra, the TMC in Bengal, the BJD in Odisha.

But will the voters, too, make common cause with the Congress?

Rahul Gandhi has been persistently trying to tie the deal directly to PM Modi. The Prime Minister becomes vulnerable because he flew to Paris and announced the deal. The defence minister was not with him and the Cabinet Committee on Security (CCS) had reportedly not yet approved the deal.

The Congress campaign has made people suspicious of ‘some wrongdoing’ in the deal — but will it become an issue outside elite defence circles, drawing room conversations and the English language press? Rahul Gandhi has been persistently trying to tie the deal directly to PM Modi. (Photo: PTI/file)

There’s a key difference between the Bofors deal, or the way corruption was made an issue ahead of the 2014 polls, and Rafale.

The difference is that the Congress campaign lacks a clean face.

Bofors had VP Singh giving it its sharp political thrust. In 2014, the anti-corruption movement was first led socially by Anna Hazare, then politically by Modi himself, who had no corruption charges against him.

Unlike them, Rahul Gandhi comes bearing an old legacy of corruption charges — from Agusta Westland to Bofors and the many other scandals associated with the Congress, including the National Herald case.

But has the BJP been able to put up its defence effectively?

Well, the BJP is getting into too many details of several defence deals, in the process, losing its audience. On the other hand, Rahul Gandhi, even though he may not have enough proof to back his claims, is coming up with catchy bullet points.

In my opinion, at least in Parliament, this gave Rahul an edge in the perception battle. Flying in circles: The BJP's defence has been too technical and difficult for the common citizen to follow. (Photo: PTI/file)

Having said that, the technicalities of the defence deal and the history of our jinxed purchases point to another crucial truth.

The Indian Air Force has been in dire need of aircraft. There are now facts available in the public domain to claim that the Rafale deal under the Modi government is actually cheaper by Rs 59 crore per aircraft than what was being negotiated under the UPA. Also, the jets procured under the Modi government come equipped with SCALP air-to-ground missiles, Meteor beyond visual range air-to-air missiles and 13 other enhancements, which are not there in the Rafales operated by other countries.

Another fact available on dedicated defence websites is that the Congress government in the 80s had done exactly what it is now accusing the Modi government of doing — turned down an offer from the French company Dassault Aviation to build Mirage 2000 in India, and instead bought more aircraft of a different variety.

This had a snowball effect on India’s fighter jet strength and planning.

An article on the website Livefist says: “Air Marshal Padamjit Singh Ahluwalia (Retd.), who commanded the Gwalior Air Force Station during the Kargil war, and oversaw the use of the base’s Mirage 2000 squadrons in precision bombings of Pakistani positions, has long held that India’s decision not to grab the offer of a Mirage 2000 production line in the eighties has had a damaging and compounding effect on India’s fighter aircraft situation.”

Thus, even as the Congress tries to carpet-bomb voters with the Rafale ‘scam’ charges, there is much in the party’s own history that may not stand scrutiny.

It is after all a perception battle, where both the sides are claiming that the other is giving it a hallucinatory spin. But the government has now tightened its belt to fight the battle of perception, with the defence minister emerging as the new 'angry woman', as per media titles, in Parliament.

Is that enough is the question though — or will Rahul Gandhi's rant of "chowkidar chor hai" resonate with the people?

Post your comment
#Bofors, #Rahul Gandhi, #Nirmala Sitharaman, #Rafale
The views and opinions expressed in this article are those of the authors and do not necessarily reflect the official policy or position of DailyO.in or the India Today Group. The writers are solely responsible for any claims arising out of the contents of this article.