Here are the six key elements in the Rafale deal that need the disinfectant of sunlight.

Is the Rafale fighter jet deal likely to be Prime Minister Narendra Modi’s Bofors? Or has Congress President Rahul Gandhi overplayed his hand?

Rahul was 17 years old when the Bofors scam broke in the summer of 1987. His father Rajiv Gandhi (a decent man surrounded at work and home by those with a weak grip on integrity) was savaged by the media and the Opposition over Bofors.

Rahul must have awoken every morning to Ram Jethmalani’s 10 questions addressed to his father on Bofors on the front page of The Indian Express. He would have heard the Opposition’s daily cry: “Galli galli me shor hai, Rajiv Gandhi chor hai.” There are six key elements in the Rafale deal that need the disinfectant of sunlight:

India is paying just over Rs 1,600 crore per fighter jet. The Congress alleges that this is three times the price negotiated by the UPA government. The comparision is odious and the Congress knows it. The price it quotes is for a bare bones fighter.

Besides, negotiations by the UPA government for the original Rafale fighter jet deal, which began over a decade ago, were for the F3 version, discontinued in 2014. The Rafale now being bought by India is the new F3R version.

How significant are these?

"They are shaped to evade radar so instead you track them by the heat signature of the exhaust which can't be masked. The enhancements include the helmet-mounted display which shows all the information on the visor/goggles. This means missiles can be launched by simply looking at the target and that split second advantage is critical in a close combat situation. Besides, there will be nuclear modifications on the Rafale that nobody will talk about publicly.” 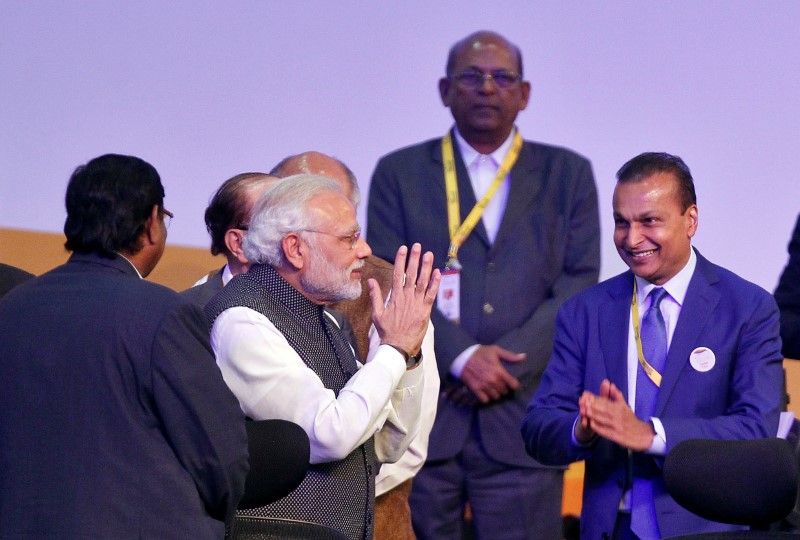 Dassault have both stated publicly that all vendors for the Rafale offset programme were chosen by Dassault. (Credit: Reuters Photo)

Rahul has focused on this following former French President François Hollande’s comments on the deal. Who chose Anil Ambani’s Reliance? French President Emmanuel Macron and Dassault have both stated publicly that all vendors for the Rafale offset programme were chosen by Dassault. Hindustan Aeronautics Ltd (HAL) is also among these 72 vendors.

The 36 Rafale fighters will arrive from France in flyaway condition. Should they have instead been manufactured by HAL in India? Says Iyer-Mitra: “HAL is so incompetent that it has never been able to produce an aircraft cheaper than imports. Save for the Light Combat Aircraft (LCA) it has only produced metal aircraft. Composites (carbon fibre) aircraft are much more complex and HAL only produces three LCAs per year and of highly variable quality. The problem was that in the earlier 126 aircraft negotiations for the Rafale, HAL refused to accept responsibility for the quality of the parts it produced and wanted Dassault to be held responsible for any flaws.”

Rahul Gandhi has trained his guns on only one of those 72 vendors — Anil Ambani’s Reliance.

The notorious arms dealer Sanjay Bhandari, a fugitive who absconded from India in February 2017, ran a company called Offset India Solutions (OIS). OIS bid for the Rafale offsets contract in 2012 during the UPA2 regime. Bhandari is close to Robert Vadra as publicly disclosed emails, foreign property transactions and phone transcripts have revealed. Dassault examined OIS’s capabilities for offsets and rejected its bid in 2012.

The contract for 126 Rafales being negotiated by the UPA government since 2007 was coincidentally cancelled in 2012, shortly after Dassault rejected the bid by Bhandari’s OIS for offsets. With the introduction of the Bhandari-Vadra angle, the Congress’ attack on PM Modi’s personal role in the Rafale deal has lost steam. (Credit: IndiaToday.in)

The then Defence Minister AK Antony justified the cancellation of the 126-fighter Rafale deal on camera: “Where is the money?”

Agriculture Minister Gajendra Singh Shekhawat was more direct at a press conference on September 24, 2018: “Rahul Gandhi is peeved and has launched a campaign against the Rafale deal as his brother-in-law Robert Vadra and his friend and business partner have been denied brokerage. The Congress president wants the deal cancelled to teach Dassault a lesson as he is angry over how his brother-in-law could not be a beneficiary. Rahul Gandhi should explain to the nation why the deal for Rafale fighters was cancelled in 2012. Was it only cancelled when Vadra and his friend were rejected by Dassault as middlemen?”

In May 2016, Bhandari’s offices in New Delhi were raided by the Enforcement Directorate (ED). Bhandari was booked under the Official Secrets Act (OSA). Confidential defence ministry documents were found by the ED in his offices during the raids. He subsequently fled India and is untraceable. The inability of the prime minister’s office (PMO) to clean up a corrupt IAS/IPS lobby working in tandem with criminals could prove Modi’s single biggest failing.

In the infamous Ravi Shankaran case, where Shankaran allegedly stole classified material from the Navy War Room with the connivance of officials and shared it with India’s enemies and competing foreign defence companies, Ojha says: “Records would confirm that proceedings against him could not progress as the Central Bureau of Investigation (CBI) blatantly ignored my repeated pleas to forward the extradition request in the prescribed Hague Convention format.”

Does the Congress’ criticism of Reliance’s inexperience in making spare parts for Dassault’s line of business jets (not Rafale fighters as is sought to be implied) stand up to scrutiny?

Reliance Defence and Engineering (RDEL) acquired Pipavav Shipyard, an 18-year-old company, in 2015. It had by then gained significant expertise in building warships. It then built capabilities in advanced avionics: Aircraft Addressing and Reporting System (ACARS), Terrain Avoidance Warning System (TAWS) and other aerostructure equipment.

Is that expertise sufficient for it to qualify as one of 72 vendors (including Tata, Mahindra, L&T, HAL and Bharat Forge) to make offset spare parts for business jets (not Rafale fighters)? The Congress has remained tactically silent on this issue.

The Congress has sought the intervention of the CVC and CAG but not yet of the courts where statements, if found false, attract perjury. Concrete evidence of malfeasance has to be provided.

With the introduction of the Bhandari-Vadra angle, the Congress’ attack on Prime Minister Modi’s personal role in the Rafale deal has curiously, but not entirely surprisingly, lost some of its momentum.

Facts have a sobering effect on fiction.

Also read: Rafale Controversy: Opposition allegations of a scam are built on quicksand

Post your comment
#Dassault aviation, #Anil ambani, #Modi government, #Rafale Deal
The views and opinions expressed in this article are those of the authors and do not necessarily reflect the official policy or position of DailyO.in or the India Today Group. The writers are solely responsible for any claims arising out of the contents of this article.