In 2011, around 4 am, riding pillion on a bike, Rahul Gandhi reached Bhatta Parsaul in Greater Noida, Uttar Pradesh — the epicentre of the farmers' agitation against the Land Acquisition Bill.

Gandhi, the then-General Secretary (in-charge frontal organisations) of the Congress, sat with the farmers, heard their plight, consoled them, offered them his support, had tea with them, visited small nearby hamlets and finally sat on a dharna at Bhatta Parsaul.

He was arrested, as a preventive measure, from the village while preparing to spend the night at a farmer's home and was later left at the Uttar Pradesh-Delhi border by the police.

That very moment, a 'Kisan Neta' came into being. 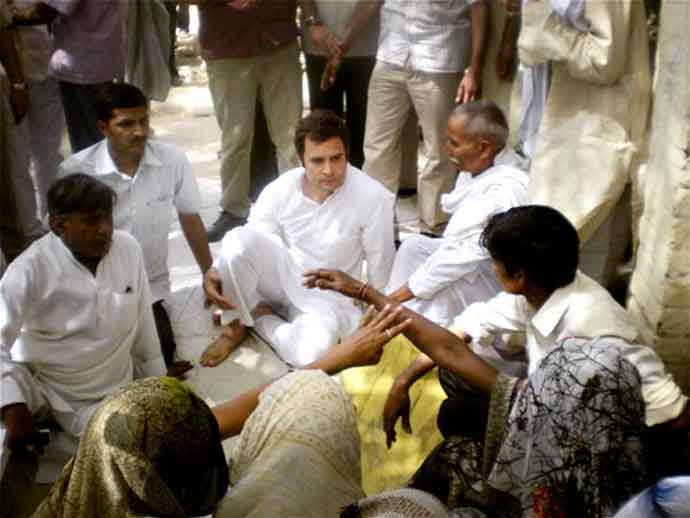 While Gandhi has been raising the issue of farmers' plight time and again, it all started with Bhattal Parsaul (2011) and the Land Acquisition Bill. (Photo: PTI)

The long battle that the Amethi MP started at Bhatta Parsaul for farmers' rights still continues.

So, when on December 23, 2019, the Congress chief tweeted, "Will make all efforts to secure farmers' future", he means it.

The recent electoral victory in three Hindi heartland states of Madhya Pradesh, Rajasthan and Chhattisgarh has given Gandhi the much-needed platform to prove the point that to "secure farmers' future" is not just a poll promise but a long cherished dream of his that he now wants to turn into reality.

But this journey is a long one.

While Gandhi has been raising the issue of farmers' plight time and again, it all started with Bhattal Parsaul and the Land Acquisition Bill.

Leading the protest against the provisions, Gandhi had accused the Modi government of deleting the 'consent clause' in the Bill. Finally, in 2016, the Parliamentary panel agreed to withdraw six provisions including the consent clause.

This was the beginning of the battle between the rights of the 'haves and have-nots' that Gandhi wanted to bring into the light.

Through his Kisan Yatra in Uttar Pradesh, Gandhi smelled the simmering anger in the farming community.

Though the SP-Congress alliance lost to the BJP in the 2017 Assembly elections, Gandhi tweaked the agenda, which is close to his heart — farmers' distress — and rolled out an upgraded version in the 2017 Gujarat Assembly polls. His interactions with farmers in small groups, nukkar sabhas and impromptu visits to the fields during his Navsarjan Yatra, turned the rural population in the Gujarat polls towards the Congress.

In June 2017, when five farmers died in Madhya Pradesh during police firing, while demanding loan waivers, Gandhi was the first national-level leader to reach Mandsaur.

Despite getting arrested — again, for preventive measures — Gandhi refused to leave the area till he was allowed to meet the family members of the victims.

Again, the Congress lost the Gujarat polls in December 2017 by a whisker, but Gandhi by now had understood the 'dil ki baat' of rural India, specially farmers.

While farm loan waiver was a short-term remedy, there were other promises made to improve the standard of living of the farmers during campaigning in the Hindi heartland states.

Even while promising a farm loan waiver deal for farmers within ten days if Congress came into the power in the Hindi heartland, Gandhi had already started working on a long-term plan to handle the agrarian crisis in the country. 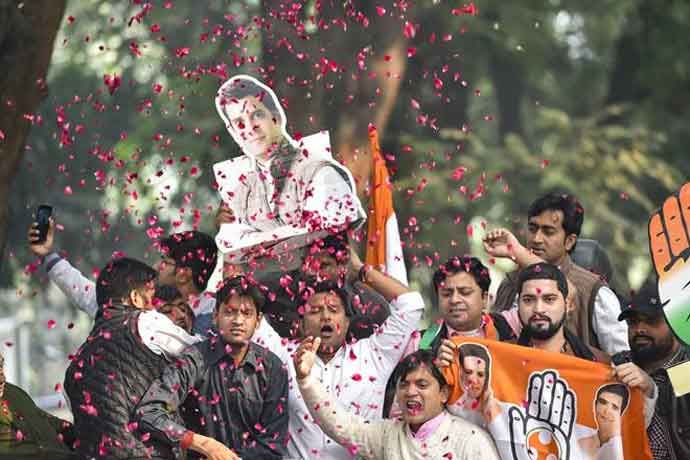 The recent electoral victory in three Hindi heartland states has given Gandhi the platform to raise the farmers' issues. (Photo: PTI)

Though his critics are questioning this loan waiver and its impact on the economy, Gandhi very well understands that a structured income support policy is the need of the hour to uplift the farmers.

The Amethi MP has already directed his generals to work on a plan to address the agrarian crisis in the long term.

This 'blue print' of measures to help ease "farm crisis pangs" will be put before the country as part of the Congress' manifesto for the 2019 Lok Sabha polls.

"Agrarian crisis was raging while the Modi government maintained, all is well. The credit goes to Rahulji that he ensured farmers' plight became the central issue in mainstream politics," said Congress General Secretary in-charge of Chhattisgarh PL Punia.

Meanwhile, Gandhi reset the Kisan Congress, which was defunct for a few years, trying to reach out to the entire farming community across the country. "2019 Lok Sabha battle will be between class and caste. We are fighting for issues — farmers' rights and rise in unemployment — unlike the BJP which wants to fight it along communal lines. Rahulji is raising issues that the BJP doesn't want to be raised," said a senior Congress leader.

The Congress is now planning to hold protests across the country from January 2019.

Hinting that he is all set to take the 'farmers' rights fight' to the next level, Gandhi famously said, "Hum PM ko chain se nahi sone dengaye (we won't let the PM sleep peacefully) till he waives off farm loans. If he doesn't do it, then in 2019 when we'll come to power, we'll 100% do it."

While interacting with media outside Parliament, Gandhi said, "We promised to waive loans in 10 days. In two states, we did it within six hours", dropping a clear hint that the principal opposition party's chief will be raising this issue to the hilt in the run-up to the Lok Sabha polls.

After the drubbing it received in the 2014 Lok Sabha polls, the Congress was hoping for a miracle to save it. Finally, it got "Kisan's Man" — Gandhi — who has ensured victory in three states of the Hindi heartland.

Well, by the 2019 Lok Sabha, the Indian political arena is all set to see the further rise of this Kisan's Man.