Rahul Gandhi’s ambitious Nyuntam Aay Yojana or NYAY would have been a great plan in utopian India. In the real world, it is just anyaay.

The Indian National Congress’ proposal of minimum income support programme (MISP) or Nyuntam Aay Yojana (NYAY) in its manifesto has come under a host of scanners with mixed reactions from various corners.

With a plan guaranteeing 5 crore families, assumed to be the poorest 20% in India, a cash transfer of Rs 72,000 a year, NYAY has some important features that address the UN sustainable development goals. At the very face of it, NYAY is embedded in Sustainable Development Goals-1 (SDG-1) that talks of a world of ‘no poverty’. It also addresses SDG-5 (gender equality) in a way that can be made out in the manifesto proclamation: “… As far as possible, the money will be transferred to the account of a woman of the family who has a bank account or who will be urged to open a bank account.” 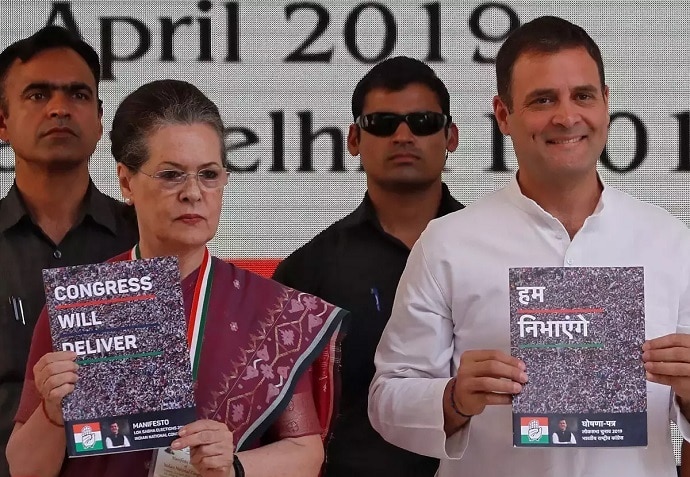 Congress released its manifesto for the Lok Sabha Elections after 121 public consultations and 53 closed-door ones. (Source: PTI)

One came across an interesting essay by economist Jean Drèze in Ideas for India where, while discussing the challenges of NYAY in terms of its conceptual framework and implementation, he proposed some principles for improving its efficacy. My contention in this article is largely sympathetic towards some of the initial challenges that Drèze puts across as a ‘pessimistic’ scenario that will be marked by the wrong targeting of transfer, government’s deficit-financing failing to tax the rich, and inflationary pressures.

Let’s go a step forward. The first concern is that creating a subsidy scheme in the form of ‘plain vanilla income transfer’ without consequent product creation at any point in time (past, present or future) creates an inherent macroeconomic disequilibrium in the product market, which by all normative terms, is unjust (or Anyaay).

#AbHogaNYAY is not just a slogan, it’s the Congress party’s commitment to the people of India. Our catchy campaign theme song has become a big hit across India. Here’s a new video built around our NYAY theme. pic.twitter.com/a38EiyvJsO

Previous subsidy schemes of the government were either linked to final or intermediate products (agricultural inputs subsidies), or employment (MNREGA). By all means, there was a price attached to the product whether in the goods market or in the labour market. Therefore, NYAY leads to money in hand without rendering productive’ labour. If I leave this scenario to be interpreted through axioms of post-Keynesian macroeconomics, this creates forces of inflationary pressures.

However, in practice, this might not have such a linear interpretation. This income transfer mechanism is targeted at low-income groups, who are supposed to use it to meet their subsistence needs. This, by itself, is another hypothetical assumption. There is always the chance of using up such incomes in conspicuous consumption like gambling and addiction.

Probably, the idea of transferring the money to the “woman of the family” is based on the assumption that they are sufficiently empowered to use the money. This may not be entirely true, especially in lower-income groups where, despite being earning members, women do not have financial decision-making powers.

Next comes the issue of the labour market. Labour economics proposes the existence of a backwards-bending labour supply curve in the developing world. Axiomatically, as incomes increase above the subsistence levels, a worker chooses hours to work in a unit time on the basis of either substitution or income effect. An increase in wage rates per unit time generally incentivises the worker to put in more time for work, as the opportunity cost of ‘leisure’ increases, ie, (s)he loses out more wages by not working.

So, with substitution effects dominating, (s)he substitutes leisure with labour and offers more time to labour. With labour time increasing with wage levels, generally, the labour supply curve is positively sloped. However, there may prevail in a countervailing impact through wage rise. Since the labour time spent at the previous wage rate earns more income than before, due to an increase in wage rate, there may be a tendency to choose leisure over labour. This implies the clear prevalence of the income effects, eventually neutralizing the substitution effect, causing the backward bend of the labour supply curve after subsistence level wages.

Under NYAY, with an additional amount of `6,000 per month earned by a family without any productive labour, there is a possibility of such backward bending labour supply function to prevail through the dominance of income effects. This can lead to an increase of voluntary unemployment that may have an impact (however marginal) on the GDP.

I come to the question the efficacy of implementation of NYAY. It needs to be understood that NYAY is a direct income-transfer scheme and needs extremely efficient targeting. The first question is: Which families fall in the category of the poorest 20%? Do we have data on that? As Drèze observes: “A socio-economic census will be conducted soon after the population census of 2021 — much as with the socio-economic and caste census of 2011.” The hard part comes after this. The class of population in the poorest 20% is highly mobile. They keep moving away from their income classes at intervals much shorter than a decade. However, the census gets conducted only once in a decade, while targeted income transfers like NYAY need annual data of the poorest 20% for effective implementation. While NYAY is a great scheme on paper, it probably needs more consideration of its potential pitfalls and implementation problems due to data gaps.

#Nyay, #Rahul Gandhi, #Congress manifesto, #Lok Sabha election 2019
The views and opinions expressed in this article are those of the authors and do not necessarily reflect the official policy or position of DailyO.in or the India Today Group. The writers are solely responsible for any claims arising out of the contents of this article.