Humiliation in polls not enough, this is how Rahul Gandhi can annihilate Congress

It's time the party promotes him to be its president.

Since he was born, time has always been ripe for Congress vice-president Rahul Gandhi for a promotion. But never as ripe as now.

The Congress, defeated in election after election and reduced to its humiliating tally in the Lok Sabha in 2014, has been completely decimated in Uttar Pradesh, once its backyard and politically the home state of the family.

It has got just seven seats of the 105 it contested, down from 269 in 1985 before the state was split in two. It has been routed in all the four seats in Rahul Gandhi’s own Amethi.

It has lost miserably in Uttarakhand. The only shining spot is Punjab, where it swept thanks only to the popularity and hard work of Captain Amarinder Singh and his wife, 10 years of abject misrule by the Badals, and Rahul largely staying out of the campaign. 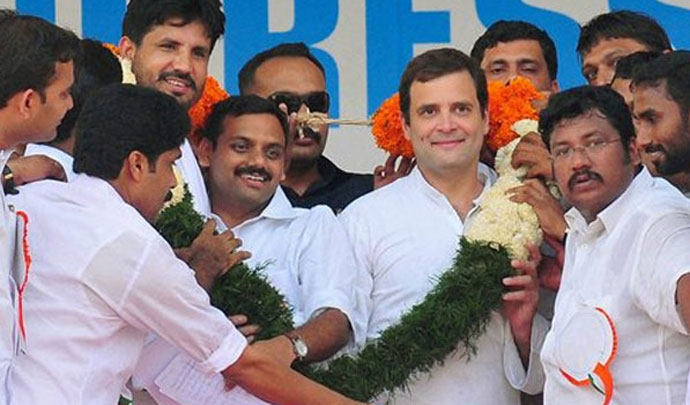 Rahul Gandhi should be given full responsibility of ruining the Congress party entirely. (Credit: PTI photo)

Under him, the party is staring at defeat in almost all major states approaching elections including Karnataka, where it is in power. Even 2019 Lok Sabha looks bleak, and the humiliation could be larger than that in 2014.

Which makes it a perfect time to anoint RaGa — who has for quite a while been the party’s de-facto chief in the absence of his ailing mother — as the Congress president. He must lead the party entirely to dust.

Only then might the family-fed, corruption-addled cronies realise that somebody with merit must emerge the hard way and take reins of the party, or quit politics and look for a day job. Amarinder is among the last mass leader of any standing left in the ranks.

The Congress has failed to understand India’s burgeoning neo-middle class and their "youth icon" is completely out of touch with the aspirations of the youth. It has lost the confidence of most Hindus by cheap minority gimmickry and the language of appeasement.

The Chomsky-inspired, socialism-loving scion has actively made sure that the party does not claim credit for its finest recent achievement, economic liberalisation.

It could also be plain pettiness of denying former PMs Narasimha Rao and Manmohan Singh their rightful place in the family-run enterprise.

But most crucially, the Congress has lost the central ground of Indian politics. By its silly activism, pat idioms and elitist view of activism, it has managed to push itself to the margins.

Rahul should be given full responsibility of ruining it entirely. Only then we will know whether the party of Gandhi, Bose, Patel, Ambedkar, Nehru and Indira, is a phoenix.

Post your comment
#UP Assembly Polls, #Assembly elections Results 2017, #Rahul Gandhi
The views and opinions expressed in this article are those of the authors and do not necessarily reflect the official policy or position of DailyO.in or the India Today Group. The writers are solely responsible for any claims arising out of the contents of this article.