In the last 24 hours, the Congress, led by Mr Gandhi, has shown scant respect for Parliamentary propriety or proper discourse outside the House. It won't be the BJP but the people of India who will respond to these shenanigans.

After watching Rahul Gandhi and his Congress party's recent behaviour, I have arrived at one strong conclusion. The Congress has become an embarrassment for us Indians.

Let me explain my view based merely on the incidents which have unfolded in the last 24 hours.

1. No respect for Parliament

Perhaps you're facing an intellectual road-block. But then, ideally, you should make an extra effort to try and understand things more clearly. Give it more attention and focus. Instead, just yesterday, Congress MPs were busy hurling paper planes at the Finance Minister, Arun Jaitley, when he tried explaining to them the basics of the Rafale deal in Parliament.

Even more shockingly, after being in a losing argument in Parliament where the Speaker asked if he could authenticate certain claims being made, the Congress president continued to churn out the same rhetoric at his press conference and then on Twitter. Surely, there should be some lines drawn about one's behaviour within the House and also, the level of discourse you as a public representative use outside it as well.

When asked by the honourable Lok Sabha speaker Sumitra Mahajan to authenticate a certain tape (purportedly of Manohar Parrikar), Rahul Gandhi seemed to duck out of the challenge.

Now, one needs to remember that fabrication is no stranger to this particular group. A good example is the fictitious bank account purported to the late VP Singh's son in St. Kitts, when VP Singh gave a tough fight to Rajiv Gandhi.

The point is, why did Rahul Gandhi not play out the so-called Rafale tape in Parliament now?

The answer is simple - he knows he could be charged with serious repercussions if the tape were proved fake. Someone already out on bail in the National Herald case would possibly not want to face another trial. However, this did not stop him from the same propaganda subsequently in his press conference and on Twitter. What does this show about respect for the sanctity of evidence and making serious claims? 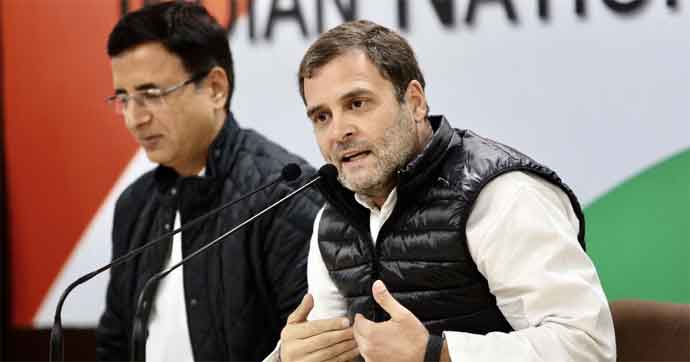 When asked by the Lok Sabha Speaker Sumitra Mahajan to authenticate the tape (purportedly of Manohar Parrikar), Rahul Gandhi backed out. (Photo: PTI)

Purely watching these shenanigans, one feels sorry to observe the Congress party reduced to such a state of opportunism.

Now, there is a set of 3-4 questions which the Congress has been asking ad nauseam in the last one year. All of these have been answered in detail. Yet, it seems the Congress is unable to comprehend the answers and hence, they keep hurling the questions yet again. The same questions were posed by Rahul Gandhi last night too.

Here are the straight answers for the umpteenth time.

A1). Because these 36 are in ready-to-fly condition. The deal was expedited considering the urgent needs of the IAF.

A2). The Congress is comparing a base aircraft with a fully loaded, weaponised one.

A3). HAL required 2.7 times the man hours needed for making the aircraft. Hence, going ahead with HAL would have meant price escalation and further delay. The campaign against PM Modi is unsubstantiated but full of vile rhetoric. (Photo: PTI)

I will also say that the way Rahul Gandhi has orchestrated a smear campaign against the PM, calling him a 'chor' without any evidence, could make for a strong criminal defamation case in my view.

However, we will not conduct that as we don't want him to hog further un-merited media space.

Rather, the people of the country will give a fitting reply to the Congress party in the coming general elections.

For now, I will simply emphasise my initial observation. As I see it, Rahul Gandhi's Congress has become an embarrassment for the country. A party that has lost sense of proportion and proper behaviour.

#Defence deals, #Narendra Modi, #Rafale Deal, #Rahul Gandhi
The views and opinions expressed in this article are those of the authors and do not necessarily reflect the official policy or position of DailyO.in or the India Today Group. The writers are solely responsible for any claims arising out of the contents of this article.