Clad in a white dhoti and a gold-and-white angavastram, Congress president Rahul Gandhi offered puja at Ujjain’s Mahakaleshwar temple on October 29. The Mahakaleshwar temple — a jyotirlinga of Mahadev Shiva — is one of the most significant Hindu temples in the country.

While ‘Shiv-bhakt’ Gandhi was doing the ‘rudra abhishek’ of Mahakaal in Ujjain, the BJP in Delhi launched another personal attack on the Amethi MP. BJP spokesperson Sambit Patra, at an official press conference of his party, asked, “What is your ‘gotra’, Rahul?” 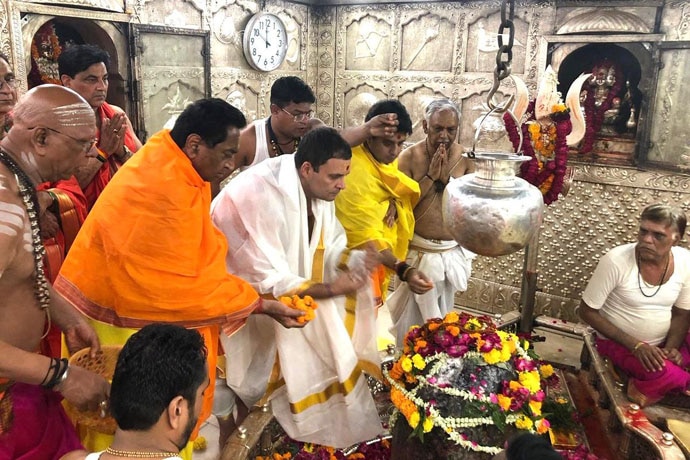 But the Gandhi scion chose to answer ‘gotra’ with ‘ghotala’ — the alleged scams that have taken place under the BJP’s watch at the Centre as well as in states.

There is a loud and clear signal from Gandhi that despite BJP attacking him at personal level, he will keep raising corruption related issues, which took place under the Modi regime and in BJP ruled states, to corner the government.

It's like the famous "Twitter" line, that goes, "Woh Gotra Gotra karen gaye, tum Ghotalon par sawal poochte rehna. (Let them talk about Gotras, you keep on asking questions about the scam)... It was Sambit Patra who wished to know Gandhi's gotra. (Photo: ANI)

Over the past months, Rahul Gandhi has been trying to establish a narrative that the BJP, led by PM Narendra Modi, has not only failed in bringing development, but has also been involved in corruption, even in the religious arena.

Thus, whether he is protesting in the national capital against CBI director Alok Verma’s removal or meeting ex-servicemen over the OROP issue, Gandhi has connected all issues with the Rafale deal and the alleged rampant corruption under the Modi government.

Picking from where he had left on October 27 in Delhi, Gandhi on Monday again targeted the Modi regime, along with the BJP government led by Shivraj Singh Chouhan in Madhya Pradesh.

The Opposition led by Rahul Gandhi has maintained that Verma was removed because he was all set to start probing the Rafale deal. There are also allegations of corruption during the 2016 Mahakumbh in Ujjain.

Gandhi said, “They didn’t even leave the Mahakumbh Mela. They swindled away money set for the Mahakumbh. Someone told me that there had been corruption in the Kumbh Mela and there should be a CBI inquiry into it. How will the CBI conduct inquiries when its director was removed at 2 am in the night?”

The Amethi MP further took a dig at PM Modi by stating that under the BJP, even selling pakoras was not profitable.

Gandhi said, “Even if you sell pakoras, the BJP will steal the money from you. You will not get its value — they will take away the money, the oil, and steal a pakora too.” 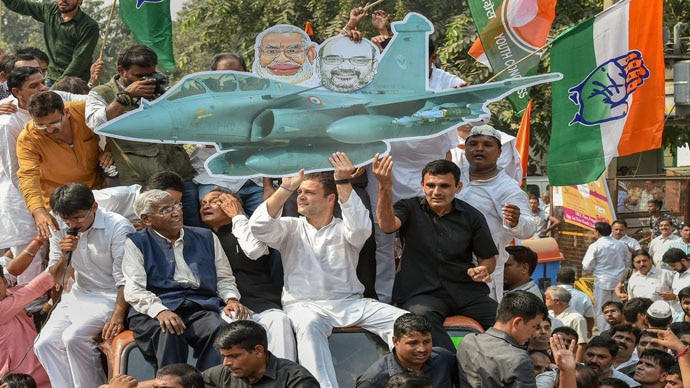 The Opposition under Gandhi has been trying to link the CBI crisis to the Rafale deal, to put the government in a tight spot. (Photo: PTI)

The theme of corruption is now resonating in the statements of other Congress leaders as well.

Senior leader and Congress spokesperson Shobha Ojha said, “For BJP, religion is a weapon to garner votes in the country. They have never bothered to develop religious sites, such as the Datiya temple, the Mahakal and Omkareshwar temples. The sand mafia has hollowed the banks of the Narmada river. There are big scams in cleaning up of the Ganga, the Kshipra and the Narmada. What to even say about the scam that took place during the Ujjain Mahakumbh. Why can’t the BJP talk about the ‘ghotalas’ under their regime?”

Meanwhile, the ancient temple of Mahakaleshwar, one of the 12 ‘jyotirlingas’, has a special connect with the Gandhi family. 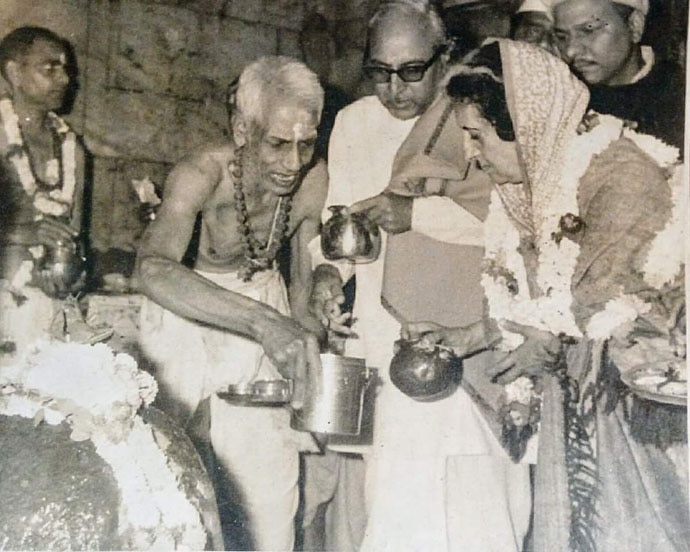 Congress sources are pointing out that Indira Gandhi had come back to power after visiting the Ujjain temple. And even Sonia Gandhi had visited the temple ahead of the 2009 polls, which the Congress won. (Photos: Twitter/@INCIndia)

Rahul Gandhi’s grandmother and former Prime Minister Indira Gandhi, his father and former PM Rajiv Gandhi, and mother Sonia Gandhi too had visited the temple in 1979, 1987 and 2008 respectively, to pay their obeisance to Lord Shiva.

Rahul too has visited the shrine in the past.

One of the Congressmen pointed out: “Indiraji came back to power after a visit here. UPA II came to power after Sonia Gandhiji did puja here. Who knows, Rahulji’s visit to Mahakal might bring the Congress back in Delhi and in Bhopal.”

Also read: Why Ayodhya is high up on the BJP's political agenda once again