Two Netas, Two Attitudes: How Narendra Modi and Rahul Gandhi stand in contrast after May 23

While NDA sports a 'business as usual' air and Modi talks of taking everyone along, Rahul is busy with his pet accusation of Modi being a divisive factor, while the Congress lacks decisive leadership.

It is now a little over two weeks since the results of the Lok Sabha elections were declared. The BJP and the Congress have been a study in contrast. The BJP has made a seamless transition from Modi 1.0 to Modi 2.0 and moved on with an air of ‘business as usual’. The Congress too, some might argue, has been acting true to its recent form — a picture of confusion worst confounded.

While Narendra Modi went ahead with government formation without wasting time and set the agenda for the new team, the Congress president locked himself in his house, practically incommunicado with the world outside. If the BJP’s actions appeared to be pre-scripted on the premise of a certain victory, the Congress seems to have been caught off-guard. One can ask — shouldn’t India’s grand old party, with a wealth of collective experience, have been prepared for an adverse scenario?

It is most likely that Rahul Gandhi’s senior colleagues in the party did not dare suggest to him the possibility of a negative outcome when his courtiers were pumping him up with false confidence. Therefore, he was devastated by the performance.

The mettle of a leader is tested more during adversity when the troops look for succour. In this situation, the signals emanating from the Congress high command have been, to put it mildly, somewhat intriguing.

Although Rahul Gandhi’s resignation charade played along expected lines, what has baffled observers is the extended period of suspended animation. If, indeed, some alternative structure is under contemplation — such as appointing a working president or even two as some are suggesting — it is shrouded in disconcerting secrecy. Meanwhile, Rahul Gandhi’s harsh comments about two incumbent chief ministers — Ashok Gehlot and Kamal Nath — have rattled the party rank and file in those states.

Amid all this, Rahul Gandhi took off for a three-day thanksgiving trip to Wayanad — the constituency that provided him a safety net for the setback in Amethi.

Expressing gratitude can be therapeutic. However, one may ask if such a long visit was warranted at this juncture as it sends a few mixed signals.

First, all said, over 4 lakh constituents, who constituent nearly 44% of the ballots polled and just 55,000 less than the winning candidate, voted for Rahul Gandhi in Amethi. It has been a Gandhi family bastion and has consistently returned members of the dynasty over the years. Therefore, will his trip to Wayanad be seen as cocking a snook at Amethi? 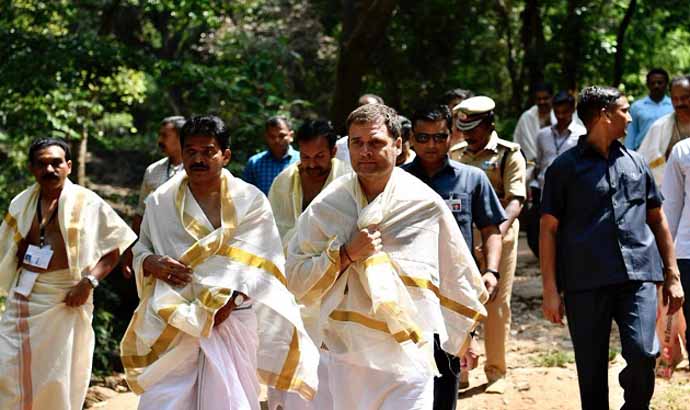 Second, many had questioned the wisdom and optics of fielding Rahul Gandhi from a second constituency in the south — that too, with a high representation of minorities. Now, by projecting him as the new ‘prince of Kerala’, is the Congress making another tactical error, virtually abdicating its place in the Hindi heartland?

Finally, if Rahul Gandhi had stuck to the “thank you” message, it would have been fine. However, he could not resist the temptation of launching a tirade against Narendra Modi with his pet accusation of dividing the country using hate and winning the election with lies. This is an affront to the mandate of the people. Juxtapose this with Narendra Modi’s visit to Guruvayur around the same time and assuring the people of Kerala that the Centre is not going to discriminate against them, despite the state not electing a single BJP candidate for Parliament — and Rahul Gandhi comes across as a political novice. 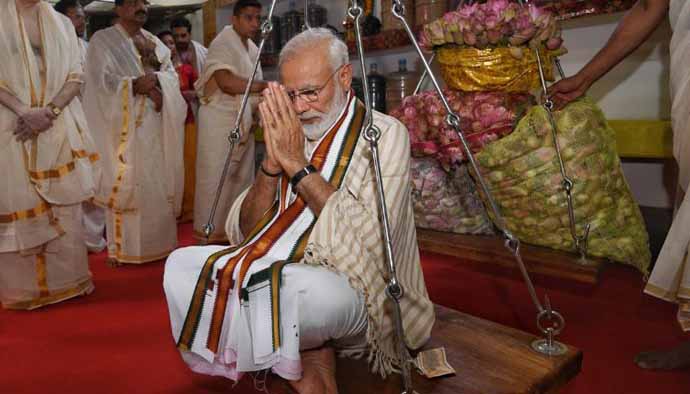 In good balance: Narendra Modi’s Guruvayur visit saw him talk in a positive and forward-looking way to the people of Kerala. (Photo: PIBIndia)

The only definitive statement from Rahul Gandhi since the results was at the Congress Parliamentary Committee meeting, when he said the Congress’ 52 MPs were enough to fight the BJP and NDA in Parliament. It was probably intended to boost the morale of the troops but carries some worrying portends.

Rahul’s assertion again indicates a lack of an alternate vision and that disruption will remain the Congress’ main strategy even during the second term of Modi. If the Lok Sabha numbers are anything to go by, this strategy did not yield the desired results in the last five years. Therefore, it would be naïve for him to believe that it will work now. Besides, Modi 2.0 comes not only with greater numbers but a solid body of work in its first term, which it can build upon.

Further, very soon, the BJP will also have the majority in the Rajya Sabha. Besides, many parties that are not in the NDA now — such as Biju Janata Dal (BJD), YSR Congress and TRS — are likely to be more circumspect in dealing with BJP to secure their own interests. Congress’ relationship with Janata Dal (Secular) in Karnataka looks precarious. The Dravida Munnetra Kazhagam (DMK) has too many chinks in its armour to go into hostile confrontation with the BJP. That leaves only the TMC with its truncated strength to rally alongside the Congress.

In such a situation, Rahul Gandhi’s war cry even before Parliament has been convened betrays a streak of Quixotism and might further isolate the Congress in the Opposition benches.

A more pragmatic approach would have been to work on rallying the Opposition on a common issue and a principle-based agenda for taking on the BJP in Parliament.

However, to do that, the Congress has to set its own house in order first and decide on its question of leadership. Last heard, it is yet to decide on who is going to be the Congress’ leader in the Lok Sabha. Logically, it should be Rahul Gandhi. However, he is known to be responsibility-shy. So, the mantle could well fall on someone else, sparing Rahul Gandhi to spread his message of love and the occasional bear hug act for the camera.

Shashi Tharoor and Manish Tewari are two names doing the rounds in the grapevine. But neither of them will carry the same weight as the party president and it certainly will not add to Rahul Gandhi’s stature as a Parliamentarian. He's got the Expergefactor: But can Shashi Tharoor ever be the Congress’ leader in the Lok Sabha? (Photo: Lok Sabha TV grab)

There is one lot that Rahul Gandhi has left in the lurch with his state of indecision.

It is his well-wishers and cheerleaders in the media and liberal circles. While the journalists are trying to keep busy by analysing how they missed the ‘Modi-wave Redux’, the intellectuals are at a loss on what should be their new line. In the absence of any cue from the palace, they are still labouring away on the old narratives of EVMs and rising intolerance.

However, all this could be misplaced concern. Rahul Gandhi and the Congress may be having a perfect game-plan ready and, therefore, keeping everyone guessing. According to the blog of a very senior television journalist of the capital, while Rahul was inaccessible to his party, he was regularly seen partying with friends in tony restaurants of the Lutyens’ zone.

So, maybe all is well at 12 Tughlaq Lane and we are fretting unnecessarily. Rahul Gandhi will hit the ground running when Parliament reopens.

Post your comment
#Wayanad, #Lok Sabha elections 2019, #Narendra Modi, #Rahul Gandhi
The views and opinions expressed in this article are those of the authors and do not necessarily reflect the official policy or position of DailyO.in or the India Today Group. The writers are solely responsible for any claims arising out of the contents of this article.