Rahul Gandhi quits: But the Congress still has a future with hope in it. It's up to the party to unearth that

With Rahul Gandhi quitting, and Sonia and Priyanka Gandhi apparently choosing to take a back seat for now, the Congress stands at a crossroads in political time.

Rahul Gandhi's resignation as the Congress president has the potential of having a make or mar effect on the grand old party. If the Congress can remain united for the next two years, it will have a chance to stage a great comeback.

There has been a collapse of regional parties in Uttar Pradesh and Bihar following the 2019 General Elections. If the Congress can position itself as a challenger to the BJP under Priyanka Gandhi's leadership, 2022 and 2024 may offer some promise. Will she lead? Priyanka Gandhi can offer hope to the Congress in the current situation. (Photo: PTI)

Rahul was a bit of a misfit from the beginning — unconventional, ireverential and far too candid in dealing with the Congress organisation. He was quick to understand the party's limitations and its aversion to reforms or keeping pace with changing times. However, between 2006 and 2013, when Rahul was made the All India Congress Committee (AICC) general secretary and subsequently elevated as the party's vice-president, he remained caught between being a reformer and status quoist.

This was the time Dr Manmohan Singh was Prime Minister — and repeatedly offered him a post in his council of ministers, while Sonia Gandhi was at the helm of affairs in the party. Rahul frittered away a great opportunity in positioning himself as a leader. The Congress old guard kept playing games while Rahul tried to usher in apolitical professionals and bring back a culture of accountability and transparency.

Walking slower? Did the Congress old guard hold back the party? (Photo: PTI)

Caught between affection for her son and her sense of belonging towards the Congress organisation, Sonia Gandhi kept walking halfway through. Sonia's survival instincts had a script of keeping everyone together — the Japanese method of holding maximum consultations and hammering out consensus instead of purging, taking drastic actions and firm stands. Her indifferent health between 2011 and 2013 and her reliance upon AK Antony, Ahmad Patel and Sushil Kumar Shinde played a role in Rahul's inability to call the shots.

In this sense, Sonia's grooming of Rahul as a leader was drastically different from Indira's handling of Sanjay and Rajiv Gandhi in their formative years in politics — Indira backed Sanjay and Rajiv to the hilt.

On his part, Rahul maintained a distance of sorts with key political players during 2011-2013 and even after taking over as the party chief in December 2017. He was courteous and attentive towards the old guard — but he had his own team of professionals and favourites who often worked at cross-purposes.

15 Gurudwara Rakabganj Road, which served as the Congress' war room during the 2004, 2009 and 2014 General Elections, lost its relevance and importance during Rahul's era. All important meetings and strategic sessions were shifted to Rahul's residence, 12 Tughlak Crescent, and other locations in Lutyens' Delhi, while in-house professionals kept whiling away their time at 15 Gurudwara Rakabganj Road.

It was not that Rahul did not try hard to bridge the gap with the old guard.

During the Gujarat Assembly polls of 2017, he worked closely with Ahmad Patel and Ashok Gehlot. Both Patel and Gehlot remained important players during the Madhya Pradesh, Rajasthan and Chhattisgarh elections. However, some young and ambitious elements in Rahul Gandhi's team kept targeting the old guard — hostilities continued. Behind the scenes, there was a lot of bad blood and a trust deficit in terms of appointments, advertising, public relations and media space agencies as team Rahul was never in the grip of things.

Sensing disquiet, Sonia Gandhi kept intervening — she abandoned her plans to retire from active politics. Instead, Sonia tried to strike a balance between team Rahul and the old guard. In the last two years, many crucial appointments in the AICC were made as part of a compromise formula between those representing Rahul and the organisation. From a distance, it looked good but deep inside, both sides were unhappy and bitter.

Priyanka Gandhi was brought in to provide strength to Rahul. She tried her best — and deliberately kept a low profile, trying not to overshadow Rahul. But Pulwama and then, Balakot derailed her plans.

By the time General Elections were called, brand Priyanka had lost its sheen. 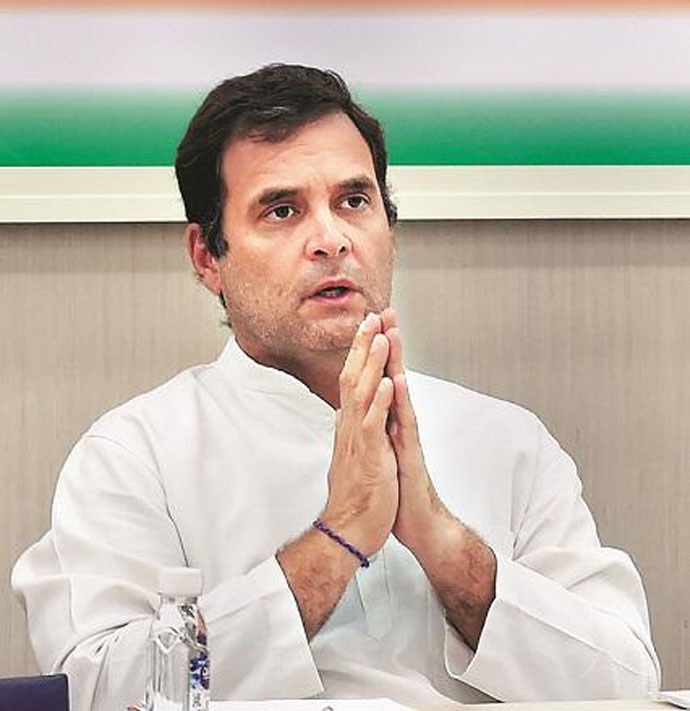 Namaste for real? Rahul Gandhi tried many changes in the party. In the end, it amounted to little. (Photo: PTI)

Rahul, however, remained hawkish and went on attacking PM Narendra Modi on Rafale and coined the slogan of 'Chowkidar Chor Hai'. Many seasoned Congress leaders were wary of it and reportedly conveyed their concern. But some data analysts and social media experts convinced Rahul that he had to play a high stakes winner-takes-all game — a strategy that failed miserably.

By the afternoon of May 23, 2019, Rahul had made up his mind to quit as the party chief. He won support from both Sonia and Priyanka Gandhi that there would be no review or rethink on his decision. Priyanka, on her own part, reportedly decided against becoming Rahul's successor.

Collectively, it was conveyed to the party managers to work out an alternative. Congress leaders of consequence kept dithering and hoping against hope. Now, it is for them to settle the successor's issue. Rahul, Priyanka and Sonia will stand by the party's decision. This was the reason why Priyanka did not resign as AICC general secretary in solidarity with Rahul. Had she done it, the entire CWC, Congress chief ministers and office-bearers would have followed suit, making a mockery of Rahul's decision. The leadership issue would have become 10 Janpath's headache.

The Congress' future may appear tense — but it is full of promise and hope. At least, this is what the Gandhis think.