Wooing The Minority: Overlooking India's Hindu majority was only one reason why Congress missed the bus to power

The Congress has been suffering from a steady breakdown in ideological clarity for decades, evident in its confusion over secularism, appeasement politics, even Pakistan. It is now paying the price.

Congress media department’s Rachit Seth’s bid to raise ‘rashtrodroh’ debate, which lists reasons why the Narendra Modi-led BJP was able to successfully brand Congress “anti-national,” is welcoming. However, typical of the party’s ostrich-like approach, Seth deleted his blog even as the grand old party is battling a leadership crisis following Rahul Gandhi’s refusal to lead it. Congressmen of all hues and shades, including Rahul, should remember a simple fact — throughout his political life, Mahatma Gandhi did not hold any formal position in the Congress organisation.

In this hour of defeat, crisis and chaos, the Congress would do well to arrive at some clarity on key ideological issues which it has been trying to bury under the carpet for decades. It is high time that a meeting of the All India Congress Committee (AICC) is convened where the voice and opinions of Congress karyakartas is heard.

Instead of blaming left-liberal elements, the Congress will do well to fine-tune its own ideological moorings and work-out a list of ‘dos’ and ‘don’ts’.  Author Zaheer Masani once quoted former Prime Minister Indira Gandhi as saying, “How can anybody who is the head of a nation afford not to be a pragmatic? You have to be practical, every day. But you have to marry your pragmatism with some sort of idealism or you would never get people excited about what you want to do.“ [Zaheer Masani, Indira Gandhi: A Biography, OUP, p 155]. In Rahul's Congress, the party’s ideology failed to get “people excited”. 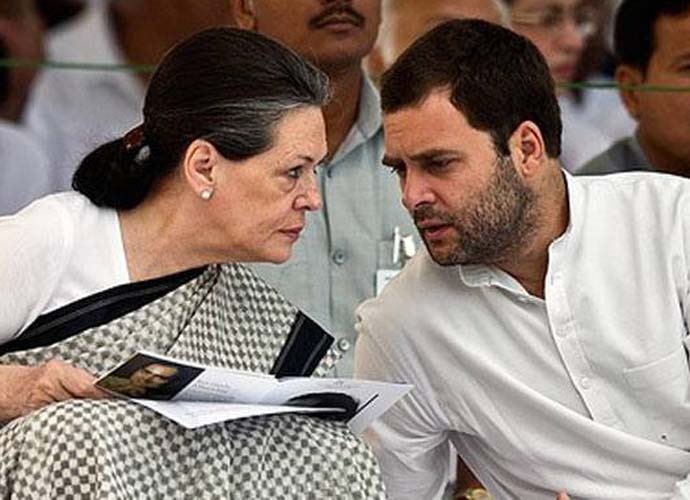 Failing to enthuse: The Congress clearly lacked the ‘idealism’ that Indira Gandhi once said gets ‘people excited’. (Source: India Today)

Rahul Gandhi’s ‘khoon ki dalali’, ‘Chowkidar chor hai’ comments have reinforced party ideologue, the late VN Gadgil’s comment that on emotive issues, the grand old party falls between two stools. At another level, it had shown Rahul as unconventional and a rather reckless leader. As AICC chief, Rahul seemed taken in by a sense of entitlement — without giving due weightage to the feelings and sentiments of millions of ordinary Congress workers, sympathisers and those who voted for the party.

For instance, a large number of Congressmen are extremely proud of the Congress’ heritage of being anti-Pakistan. According to them, Indira Gandhi was singularly responsible for the division of Pakistan. Rajiv Gandhi had threatened to go toward war with Pakistan in 1987. Natwar Singh had promised to give a “bloody nose” to Pakistan. Even the otherwise peacenik leader IK Gujral, who served as prime minister in 1997 (thanks to Congress support from outside), had told KP Nayar of The Telegraph (July 22, 2001): "One of the myths about Indian diplomacy is that there are hardliners and softliners on Pakistan. In the Indian `Establishment', you cannot deal with Pakistan and be what peaceniks would call a `softliner'."

Gujral, a former Congress leader who had served in Indira's cabinet, was miffed at criticism that he was soft on Pakistan. He had told Nayar, “Do you think I will give away anything to Pakistan? I am as much of a nationalist as anyone else' and stressed that his `Gujral doctrine' did not cover Pakistan.

In 2012, Rahul had himself given credit to Indira for breaking up Pakistan. Flexing his muscles, he declared to voters in Badaun, “I belong to the family which has never moved backwards, which has never gone back on its words. You know that when any member of my family has decided to do anything, he does it. Be it the freedom struggle, the division of Pakistan or taking India to the 21st century.” Played a hand: Despite a heritage of being anti-Pakistan, BJP managed to prove that Congress was 'anti-national'. (Source: India Today)

Historically, the Congress’ bid to mix religion in its political campaign has remained problematic.

There was a huge contradiction in the way Jawaharlal Nehru and Mahatma Gandhi viewed religion and politics. As I have mentioned in my book 24, Akbar Road (Hachette), Nehru was firm in his definition of secularism that meant separation of religion from the political, economic, social and cultural aspects of life. Religion, in Nehru’s scheme of things, was a personal matter that the state should disassociate from at all costs. In a letter to his home minister Kailashnath Katju in 1953, Nehru wrote, “The fate of India is largely tied up with the Hindu outlook. If the present Hindu outlook does not change radically, I am quite sure that India is doomed.” Nehru had constantly observed that the communalism of the majority community had a great potential to resemble nationalism.

But for Mahatma Gandhi, religion was an integral part of secularism. Gandhi, who agreed with his disciple Nehru on a range of issues, was a believer that the Nehruvian secular prescription would not work for India. Gandhi kept saying, “politics bereft of religion is absolute dirt.”

Post-May 2014, the Congress’ ideological dilemmas became more pronounced but Sonia-Rahul decided to follow the path of least resistance and skirted the issue, much to the dismay of many faithfuls.

The Congress has been cautious on the contentious issue of religious conversions. When a news channel ran a story on the rise of beef exports during the first six months of the Narendra Modi government, the Congress dithered over commenting on it. Privately, some leaders said a comment on beef exports had the potential of upsetting either the Hindu or Muslim community.

Secularism has been an integral part of the Congress ideology, implying the separation of religion from politics. In September 1951, Nehru got all the CWC members of PD Tandon’s team to resign, thus obliging Tandon, a right-wing Congress president himself, to resign — it may have been a mere coincidence that in the same month, the Bharatiya Jana Sangh was formally launched with both Atal Bihari Vajpayee and LK Advani being present.

Nehru, who had become the Congress president after Tandon’s resignation, pronounced the bottom line of the party’s secular creed at a meeting in the Ram Lila grounds on Gandhi Jayanti in 1951: ‘If any man raises his hand against another in the name of religion, I shall fight him till the last breath of my life, whether from within the government or outside.’

However, the demolition of the Babri Masjid and successive events cast a shadow on the Congress’ commitment towards the minorities. While the Muslim leadership and religious clergy dubbed the Narasimha Rao-led Congress as furthering narrow ‘majoritarianism', a group within the Congress began calling for the need to review the concept of secularism. Turn the page: The Congress was so engrossed with minorities, it forgot about the Hindu majority. (Source: India Today)

VN Gadgil (deceased), who served as AICC spokesman during the regimes of Narasimha Rao and Kesri, had told Congressmen at a seven day-long training camp in Maharashtra, that he disapproved of the Congress leadership’s policy of appeasing Muslims. At Kurla, which was a training camp to select ‘future Congress leaders’, Gadgil launched a scathing frontal attack on Congress policymakers. He observed, ‘Every time the Shahi Imam makes a statement, the party reacts as if God himself has spoken. Do minorities mean only Muslims? What about Buddhists, Sikhs and others? When thirty-six Sikhs were killed in Kashmir, not a single Congressman condoled over their deaths. In Jammu and Kashmir, there is not a single Buddhist working in the state secretariat. The only Buddhist who was selected through the state public service commission had to convert to Islam to secure a government job... The Congress is silent on this.’

‘While appeasing Muslims, we should not forget Hindus, who are a majority in this state,’ Gadgil said, pointing at an article published in The Economist, which stated that ‘Islam and democracy do not go together’. Quoting from the article, Gadgil said a province in China which had a substantial Muslim population wanted to break away and form a separate nation. When Gadgil was asked why he was saying all this, he said: ‘I have said this earlier. Muslims constitute only 18 per cent of the vote share. Even if all of them vote for the Congress, the party will not return to power. We cannot go on ignoring the sentiments of the other 82 per cent.’

The Congress, under new leadership, will do well to ponder over Gadgil, Seth and the rest and find a way forward.

The near-absence of ideological clarity will not work.