Sins of the father: Rajiv Gandhi, not Rahul, is responsible for where the Congress is today

Rahul Gandhi never inherited a party that had much internal coherence or ethical power. Rajiv Gandhi had weakened the Congress through the choices he made. It's unfair to blame only Rahul today.

The legacy of Jawaharlal Nehru could soon be buried and remembered only in history books.

Today, the Congress is reduced to a rump and Nehru’s great grand-son, Rahul Gandhi, is insisting on quitting as president.

I don’t know whether it will be a good thing or a bad thing for the Congress if he goes. The inheritor of loss: Why Rahul Gandhi faces such a dismal set of choices today. (Source: PTI)

I suspect the latter because the Nehru-Gandhis have, alas, become the only glue in a seriously ailing party. Besides, Generals can walk out after being defeated in the battlefield only when there is a chain of command to take over. In the Congress, there is none and those who still stand will be so busy watching their own backs and destroying each other that they could take down what’s left.

It’s the night of the long knives in the Congress — and history has shown us that as turfs get smaller, people fight more fiercely for what is left.

Books will be written on what has come to pass but here’s my two bit. In the course of the campaign, Prime Minister Narendra Modi attacked hard on May 4 while speaking at a rally in Pratapgarh in Uttar Pradesh (close to Amethi). He said to Rahul Gandhi that your father was described as Mr Clean by courtiers but he ended his life as Bhrashtachari number 1. The PM was probably referring to the Bofors scandal but the words were tasteless as Rajiv Gandhi was blown to bits by a suicide bomber in 1991. The PM could have alluded to Rajiv without mentioning his death. I held my horses at that time because it seemed tasteless to comment on the Rajiv legacy in the midst of an election campaign. Numerous friends of Rajiv of that era posted messages and tweets about what a gentleman he was and a fine human being. I’m sure he was — but I strongly disagree with their assessment of his reign.

Now is perhaps the time to be an iconoclast and state quite firmly that Rajiv Gandhi presided over the most disastrous era in Congress history.

If Congressmen are lamenting the loss of the “soul of India”, look not to his mother Indira, who did spectacularly subvert democracy during the Emergency, look not to Sonia, Rahul and Priyanka, who may have been incompetent in various ways, but look to Rajiv.

And I speak not of Bofors but list four serious charges.

First, Rajiv was the first democratically elected leader of India to preside over a mass killing and then win a historic mandate. He won 411 seats in Parliament after his mother’s assassination and we mostly glibly put it down to a 'sympathy wave' because Indira Gandhi was brutally murdered by her Sikh bodyguards. But look a little more closely and understand that India gave this mandate after many of its fine citizens had turned on an entire community, lynching, killing, burning, looting in the horrific 1984 anti-Sikh riots.

And search the internet for that speech made by Rajiv where he said that the earth shakes when a giant tree falls.

Here was the grandson of Jawaharlal Nehru, who survived the Partition with his head held high, justifying a mass killing, one of the worst in our history. No, it was not some right-wing ideologue of the past but a Nehru-Gandhi. 1984, according to me, is the first template for electoral success after a mass riot.

The Congress did it before the BJP. Where it all began: Rajiv Gandhi justified the 1984 anti-Sikh riots by saying that 'the earth shakes when a big tree falls'. (Source: India Today)

Rajiv Gandhi is also directly responsible for sowing two issues that the BJP would reap a bumper crop on. In 1985, as prime minister after that historic mandate, he gave in to the Muslim conservatives in the Shah Bano affair. He enacted a law that overruled a secular court’s decision that stated a wife (Shah Bano) was entitled to alimony from her ex-husband. Rajiv enacted a law abolishing the alimony provision in conformity with the Sharia. In doing so, he gave the BJP its first big issue: that India under Congress succumbed to clerics and Muslim fundamentalists.

Having pleased the Muslim conservatives, Rajiv tried to balance it by playing to Hindu fundamentalists. He ordered the locks on the Ramjanmabhoomi-Babri Masjid in Ayodhya removed. Until then, a priest had been permitted to perform puja once a year for the idols installed there in 1949. Now, the doors were wide open — we know what happened next.

We have heard much about crony capitalism these days. But consider how the Rajiv Gandhi regime handled the Bhopal gas tragedy — and hang your heads in shame.

Four days after a deadly gas leak at Union Carbide's plant in Bhopal killed thousands in 1984, the company's chairman, Warren Anderson, was arrested on his arrival in the capital of Madhya Pradesh. But, after being held under house arrest for only a few hours, Anderson posted bail and quickly left the country — never returning to face trial. Several reports have suggested that the government was pressured by the US to let Anderson go. The late Congress leader, Arjun Singh, then the chief minister of MP, wrote in his autobiography that he was instructed by then Union home minister PV Narasimha Rao to let Anderson go.

Yes, Rajiv was the PM — and if there was complicity with a multinational company, that is crony capitalism too. Yes, Rajiv Gandhi opened up the Indian economy too.

Rajiv Gandhi also took the controversial decision to send Indian forces to Sri Lanka in 1987. Many critics have seen it as an ill-advised decision taken in haste without coordination with the government in the state of Tamil Nadu. It’s too complex an issue to get into now but Rajiv did pay with his life for that historic error when a suicide bomber of the Liberation Tigers of Tamil Eelam blew him up.

In conclusion, I would say that Rajiv could have been the sort of nice guy that Graham Greene novels describe. The kind of person who believes they are doing good and act with the foolishness of privilege and too much power, setting off bush-fires here and there.

Some of those fires burn on.

His son Rahul, having lived through the trauma of two assassinations, has never inherited a party that had much power. 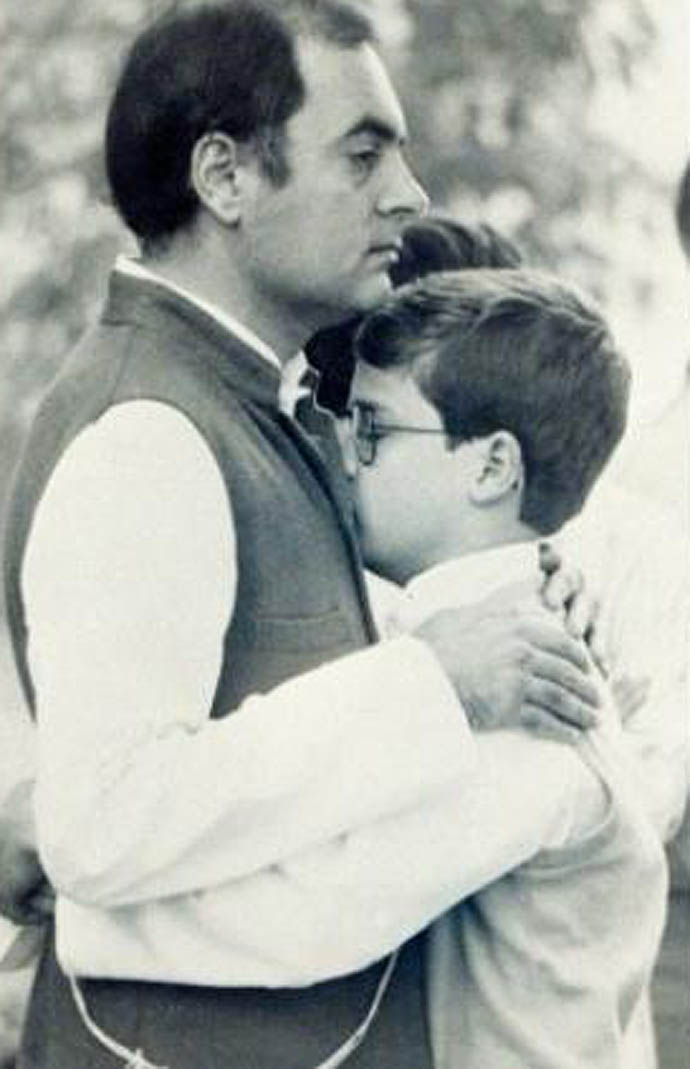 Is it really his fault? Rahul Gandhi has lived through the trauma of two assassinations and multiple bad choices. (Source: India Today)

To me, he seems like a nice guy who has struggled — and who currently faces two bad choices.

Post your comment
#Congress president, #Lok Sabha elections 2019, #Rajiv Gandhi, #Rahul Gandhi
The views and opinions expressed in this article are those of the authors and do not necessarily reflect the official policy or position of DailyO.in or the India Today Group. The writers are solely responsible for any claims arising out of the contents of this article.