Only a Gandhi can save Congress

Spooked by BJP, Congress dropped secularism and lost credibility. It now faces a long, hard battle to regain its face.

Congress president Rahul Gandhi is facing fire from the people who did not want Narendra Modi to win. Some of them are so invested in him that they have internalised his failure as their own. Since these rai bahadurs do not hold any position in the Congress party, all they can do is express their rai (opinion) which is: Rahul Gandhi must resign.

I haven't heard one Congress leader asking her president to abdicate. All I hear is hawkish hacks and political pundits asking him to hand over the baton to someone, anyone, in the party. They speak with an authority and arrogance that would denote it is they, not mom Sonia Gandhi, who appointed him Congress president. They have just discovered that he lacks vision, makes wrong choices and fails in stitching the alliances they want him to stitch.

If that doesn't sound ridiculous enough, these pundits and well-wishing non-state actors are clueless about who, if not Rahul. Like they were about who if not Modi — they just wanted Narendra Modi to leave their sight. Now they want Rahul Gandhi to go, damn the consequences.

Less than a week ago, they were going around tweeting how Rahul Gandhi had matured as a leader, how his body language has changed over the years — and how he is poised to win big and warm their hearts.

Just observe Rahul's body language in this interview with Ravish: Calm, confident, rational& straight. Contrast with Modi's body language in his speeches: Tired, angry, confused& desperate. You can judge from these itself as to who is winning the electionshttps://t.co/11tMkVDLYU

If Rahul Gandhi has matured as they allege, why would he listen to these cry babies with no skin in the game?

The leadership issue in the Congress has long been settled. Rahul Gandhi is the boss, whether one likes it or not. Yes, he has lost miserably and the recovery will be not be easy and certainly not quick after this knock.

But first, he doesn't have to worry about regaining states or seats but credibility. Elections come and go. Credibility, once gone, is hard to regain. Rahul Gandhi promised Rs 72,000 per annum to the poor in place of the Rs 6,000 that Mr Modi promised. People did not find his promise credible. Let us keep the other promises aside. When the desperately needy reject your money, you shouldn't worry about other promises. That’s the Congress's crisis — the lack of trust Level Arvind Kejriwal.

Mr Kejriwal was trusted because he arrived on the scene in the name of a politics of principles. Till, by a string of actions, he showed he had not any. He is reduced to being just another politician and his party is just one of the parties ready to compromise on its founding principles. So much so that a candidate like Atishi, loved universally, lost by a huge margin because she fought on a Kejriwal ticket. A petulant bigot like Pragya Singh Thakur won by a huge margin because she was fighting on a Narendra Modi ticket.

In fact, you could put a toad in the contest on the lotus symbol and see it jumping into Parliament on the back of the Modi wave. 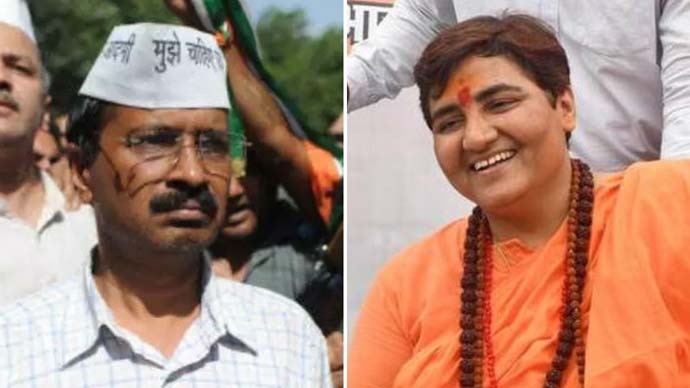 He lost credibility. She didn't need any. Guess who won? (Photo: DailyO)

Politicians and pundits can continue forwarding Modi memes — but one in every two voters believes she can trust Narendra Modi. Because his political message comes out as transparent. He doesn't pretend to be secular — and can ridicule the badge in public. He may represent the right but he doesn't hide his socialist economic leanings while wooing capitalism on the side. He wears Hindutva on his sleeve.

It was clear pretty early in the campaign that the Rafale and 'Chowkidar Chor' mud wasn't sticking to Teflon-coated Modi. The BJP could and did turn that into an advantage, foxing the Congress party. Narendra Modi's delivery of welfare schemes was much better than that of the previous Congress government. There was no point in raking up welfare, his strong point.

But Narendra Modi's weakest point was the incessant attack on social cohesion and the open support of bigotry from his supporters. Apart from PM Modi's strongly worded condemnations at a couple of points, this brigade was allowed to openly brandish their bigotry, much to the discomfort of one minority and a majority of the secular-leaning majority. 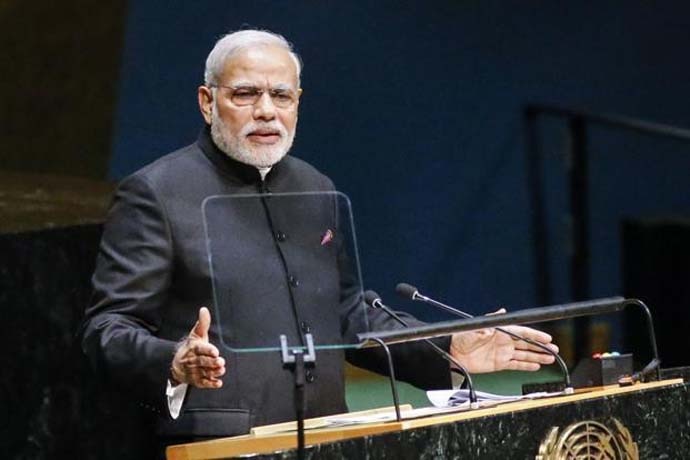 PM Modi spoke out against lynchings. But they carried on regardless. A gap existed. (Photo: AP)

The Congress party betrayed the latter when it chose to underplay mob lynchings by vigilantes in the name of the cow.

I assume some super-smart advisers suggested that secularism in deed would anger the Hindus as if all Hindus are bigots. While claiming to be the custodian of a secular Hindustan, Congress continued to be meek when it came to walking the talk. It started believing that since Hindus worship cows, anything they say will be quickly turned into a statement against the cow and that, in turn, would harm the party. Don't fall in the trap, the pundits said. Forget the principles for profit booking. Let the media do the protest, lest we be branded as 'anti-Hindu'.

The tortuous temple runs and vulgar attempts to prove Rahul Gandhi's Brahmin credentials chuckled the saffron heart. Party motormouths kept bragging about his gotra. BJP spokespersons claimed credit for having turned Rahul Gandhi into a practising Hindu. You must have a robust Hindu identity to stay relevant, the advisers said. 'Secular' has become a dirty word, they believed. In this entire campaign, not once did Rahul thus say that the killing of Akhlaq and the rabid justification of that murder were a blot and the Congress party would fight the fratricidal fantasy of a minority among Hindus with the fury and determination it deserved. Not once did he invoke the crass communalism of the lumpen luminaries. Heck, he wouldn't even mention the word 'secularism' and attempted to cover this by talking about 'real issues, like jobs and farm distress' — as if a broken society wasn’t a real issue. The party failed to warn Indians in general that normalisation of the nuts is dragging us into a darkness that none of us, Hindus, Muslims, Sikhs, Christians, atheists and tribals, can afford to enter.

But, for votes that were never to be its, the party continued to play soft and got hit hard, bohot hard. Its secular credentials now have no credibility.

It can be built again. It is a long, hard journey from here — only if Rahul Gandhi does not waver under pressure of the punditry and poll arithmagicians. Elections come and go. Credibility, once gone is tough to regain.

Only a Gandhi can save the Congress: Mahatma Gandhi. If Rahul Gandhi wants to revive Congress as an idea, he should go back to the Mahatma. Bapu had 99 flaws — but dishonesty wasn't one. Once he espoused a cause, Gandhi wouldn't waver because A or B wouldn't like it. Some top Muslim leaders then didn't practise the secularism this frail Hindu man lived. Leaders of the Muslims were relentless in their sectarian campaign, always virulent and often violent, that ended only with Partition. Gandhi's decision to stick to secular principles at any cost would ultimately anger the Hindus too so much that one of them would shoot him dead. The one Gandhi Rahul should now follow. (Photo: Wikimedia Commons)

It is time a party occupied the space — and truly embraced it. In politics, principles have to constantly guard against pragmatism. Congress doesn't need to drop secularism, it needs to drop the pseudo part that panders to pragmatism. If Rahul Gandhi can convince the people that this core principle is not up for compromise, he will find takers.