Why Rahul Gandhi’s temple run is not ‘soft-Hindutva’

In the pretext of Hindu religion and nationalism, BJP is shoving pro-super-rich neoliberalism and Savarkar’s Hindutva down our throats.

The German word "Zeitgeist" means the defining spirit or mood of a particular period of history as displayed by the ideas and beliefs of the time. The repeated use of terminology - words and phrases - is most crucial in the creation of the Zeitgeist, and also to challenge and dismantle it.

The word Hindutva has become an essential word that defines the Indian Zeitgeist. It has come to mean Hindu and all that goes with it - culture, tradition and belief systems. Anyone who is critical of Hindutva is being placed as "anti-Hindu", "minority appeaser" and "leftist".

In a similar vein, anyone critical of Prime Minister Narendra Modi and the BJP is being placed as an "anti-national".

In the Indian Zeitgeist, the saffron brigade has hijacked "Hindu" and "Hindu nationalism".

In this atmosphere, the media, the liberal public intellectuals and the political pundits are describing Congress president Rahul Gandhi’s temple visits during the recently concluded Gujarat elections as "soft-Hindutva", "majoritarianism" and a "right-of-centre-move" away from secularism. 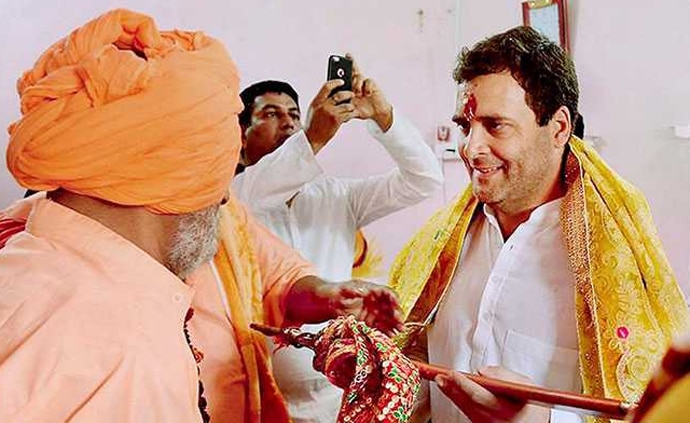 This cannot be more erroneous. The liberal chatterati shouldn’t disconnect themselves from the psyche of our times and the shifting ground realities. The words Hindutva, majoritarianism and secular shouldn’t be misunderstood.

Hindutva is not Hinduism

A few months ago, I realised the reluctance of the liberal and the progressive intellectuals and commentators to write and talk deeply about Hindu religion, philosophy, mysticism, science and cultural texts. This vacuum of discourse has allowed the saffron brigade to become the "self-selected guardian" of all the "Hindu" topics; and they are largely making a hash of them through deliberate distortion, unconscious misunderstandings and fantastical exaggerations which are aimed to further the political agenda of the saffron brigade.

I wished to do something about this and wrote a long form essay wherein I reiterated what has been forgotten: the actual origin and real meaning of the four crucial words: Hindu, Hindutva, Hindustan and Hinduism. The essay was meant to carry truths to the minds of the readers, who are confusing Hindutva with Hinduism.

Hindutva - a word coined by Vinayak Damodar Savarkar in 1923 - means a militant theo-nationalistic political ideology, and has no connection with Hinduism/Sanatan Dharma. A Hindu - as per Hinduism/Sanatan Dharma - is not one type, but many. A Hindu can be a believer, agnostic and atheist. One doesn’t have to be communal and develop the fear/hate of the "other" to be a Hindu.

The crucial distinction between Hindutva and Hinduism/Sanatan Dharma needs to be spoken about in the political, social and media discourse to dent the saffron agenda to place Savarkar’s militant theo-nationalism as Hinduism.

In the Indian Zeitgeist, Hindutva can be countered more effectively with real Hinduism/Sanatan Dharma.

Majoritarianism is described as "a political philosophy, ideology or agenda that asserts that a majority (categorised by religion, language, social class, or some other identifying factor) of the population is entitled to a certain degree of primacy in society, and has the right to make decisions that affect the society".

In the Indian Zeitgeist, "majoritarianism" is being displayed by the Hindi-Hindustan-Hindutva brigade, whose socio-cultural engineering mission is to disregard the diversity and the plurality of India, and try to "convert and colonise" all Hindus with the Hindutva ideology, Hindutva habits and Hindutva belief systems.

In a nation of over 80 per cent of Hindus, when the non-Hindutva Hindus assert their real Hindu identity, this works to counter the aggressive Hindi-Hindustan-Hindutva majoritarianism, and dent the socio-cultural engineering mission of the saffron brigade. This also counters the communal/ linguistic/cultural/regional polarisations; and begins to heal the societal stresses and anxieties which are rupturing the plural and syncretic fabric of our nation.

In this piece, I explored the real meaning of the word secular in terms of our Constitution.

When religion is no longer being kept out of politics, there is a need to understand that secular in the Indian context means that our Constitution gives no special status to any religion - all religions have equal respect. It is the Hindutva "religious exceptionalism" that needs to be countered with the secular, syncretic and plural Hinduism/Sanatan Dharma and the principles of our Constitution.

In another piece, I have told two stories: how Gorakhnath Mutt, the seat of the Natha tradition has largely lost its original esoteric "identity-less" teachings and has become a seat of quasi-militant strain of Hindutva, and the crucial role of Digvijay Nath of Gorakhnath Mutt in the Ram Janmabhoomi-Babri Masjid dispute.

I hope that the reader will click on the three links given above, after reading this piece, and come to understand what we need to realise in the context of the crucial words/ideas/issues which are defining the Indian Zeitgeist.

Ideas for a new Indian Zeitgeist

In the pretext of Hindu religion and Hindu nationalism, BJP is shoving pro-super-rich neoliberalism and Savarkar’s Hindutva down our throats. It is also looking more likely - going by the low-level political discourse during the Gujarat elections - that the BJP will increasingly play the communal card and raise divisive controversies as 2019 approaches.

In the hour of looming dangers, I would hope that the press, the media and the liberal chatterati will start to use correct terminology and won’t confuse Hindutva as Hindu, and Hindutva nationalism as Hindu nationalism. Nor would they misunderstand the meaning of majoritarianism and secular.

To keep on calling Hindutva nationalism, or rather Hindutva theo-nationalism, as Hindu nationalism is erroneous; it is a grave injustice to the spiritual and philosophical heritage of Hinduism/Sanatan Dharma; and this needs to be rectified.

When I see that Savarkar’s fascist Hindutva is being referred as Hinduism, I feel that same "wrath and sadness", that Fyodor Dostoyevsky spoke about in Demons, when he pointed out that a person suffers enormously when he/she sees something that is higher and sacred "is caught up by the ignorant and dragged forth before fools like themselves into the street, and you suddenly meet it in the market unrecognisable, in the mud, absurdly set up, without proportion, without harmony, the plaything of foolish louts".

The term soft-Hindutva is also a meaningless error, when it is used to describe non-Hindutva Hindus who assert their secular plural Hindu identity that is aligned with real "Indian nationalism" - the principles and ideals of our Constitution.

Once the BJP loses its hegemony over Hindu and Hindu nationalism, the word "Hindu" cannot be used to hide the failures of social and economic governance, suppress its anti-poor and anti-middle-class policies, and garner votes on the plank of the communal card and the hyper-emotive issues, supported and manufactured by the partisan media and the saffron troll factory.

The BJP’s propaganda weapon of fake nationalism - that has made "enemies" out of one’s own citizens who simply disagree with them - and fake Hinduism - ritualistic tokenisms devoid of spiritual ideals - to manipulate "Hindu" sentiments needs to be blunted.

The discourse needs to be shifted away from religious identity and focussed on the real issues of development, inclusive growth, jobs, human development indexes, widening inequality, a steep rise in the cost of living, extractive indirect taxation via a complex technocratic GST, an inquiry into the demonetisation disaster, dilution of democracy, weakening of critical institutions, curtailment of privacy/freedom, sinister digital surveillance, disempowering of citizens, crony capitalism, misplaced priorities in governmental spending, the need to curb extremist fundamentalism of all religious groups and the delivery of social justice.

Only yesterday, Swami Swaroopanand Saraswati the present Shankaracharya of Dwarka and Joshimath Peethas - the spiritual lineage of Adi Shankara who is credited to have revived "Hinduism" in the 8th century after centuries of Buddhism - demolished RSS chief Mohan Bhagat's assertion that "everyone born in India is a Hindu" and also said that the government and the political parties have no right to build Ram Mandir because India is a secular country.

To counter the Hindutva brigade and disrupt the Indian Zeitgeist, a counter idea is needed. Mere intellectualisations or the old "secular plank" might not be enough to win the arguments against Hindutva; a "spiritus-political" movement is required that touches the heart, awakens the mind, provides inspiration and offers hope.

"Sanatani Bharatiya" or "eternal Indian" can mean the "non-Hindutva brigade" that gathers all the political opposition in a wider coalition to fight on a united front that won’t divide the non-Hindutva votes and allow the BJP to scrape through, like it has done so, in Prime Minister Modi’s home state of Gujarat.

Knowledge against ignorance, idealism against cynicism, courage against fear, love against hate, civility against coarseness, truth against falsehood, peace against violence, authenticity against deception, unity against divisiveness and the soul over the ego - this is the path that we need to walk upon to protect and strengthen our democracy, our Constitution and our nation.

It’s now time to frame and introduce a honest narrative within the Indian Zeitgeist.

I hope Congress president Rahul Gandhi and the Left will take the lead to develop the fresh new narrative in accordance with our times and will unify the Opposition under a common wider platform - in spite of the differences - to fight and defeat the BJP in the larger interest of the people, and thereby, also force the BJP to move away from the far right ideology of the Modi regime towards the pragmatic moderation of Vajpayee’s political lineage.

Prime Minister Modi’s far-right brew of neoliberalism and Hindutva is causing enormous socio-economic damage that may take several years or even decades for us to heal and recover. The "hate-washed communal psyche" of a large section of our most vulnerable citizens is showing a "pre-Rwanda carnage" mindset; this also needs a psycho-emotive cure and the revival of the "humane spirit".

The Left also needs to update its ideology in the 21st century to reach out to a larger populace. The 19th century stance against religion and spiritualism is out of date in the times of mystifying quantum mechanics and proven benefits of meditation by multiple studies. When modern science tells us that 95 per cent of the universe - including us - is made of the invisible dark matter and dark energy; the "material mindset" based upon 5 per cent of visible baryonic matter appears primitive.

The Left should ideally draw inspiration from the popular "social democrats" like Bernie Sanders, Yanis Varoufakis and Jeremy Corbyn, and set aside the hardcore dictatorial "communists" like Stalin, Mao and Kim Jong-un, who has started to appear on the Left posters in Kerala.

In a democracy with a "market economy", old-styled "communism" cannot survive. But pro-people "social democracy" can flourish to defeat the far-right-vulture-Capitalism of pro-super-rich neoliberalism that is causing socio-economic havoc and ecological damage across the planet.

Original thinking, innovative strategies and fresh ideas are required to create a new Indian Zeitgeist; the beginning of the crucial campaign trail of 2019 General Elections is just 13 months away.

#Modi, #Soft-hindutva, #Hindutva, #Rahul Gandhi
The views and opinions expressed in this article are those of the authors and do not necessarily reflect the official policy or position of DailyO.in or the India Today Group. The writers are solely responsible for any claims arising out of the contents of this article.