The 'revamped', snarky social media presence of the Congress vice-president is heartening, but electoral battlefield is a different ballgame.

Yet again, everyone's talking about the "new Rahul Gandhi". This time, however, not so much about Narendra Modi, the prime minister and one half of the duopoly that is the ruling BJP's power centre.

Avoiding the Modi mention is a good way to skirt talking about the series of economic policies that have collectively resulted in low GDP growth, millions of lost jobs, serious dip in employment generation, lost businesses and the flattening out of what could have been one of the biggest tax reforms in the history of India into a convoluted, half-rolled-back dud of a public policy.

So instead of discussing Modi, many have started focusing on Rahul, who seems to be positively interesting again. However, we need to ask if it's @OfficeOfRG, Gandhi's official Twitter handle, that's the basis for this fresh lease of life into a politician who has been in public life for two decades now. With 3.67 million followers, Gandhi is still way behind PM Modi, who has 35.3 million following him, more than 11 times in fact, or even Arvind Kejriwal, who has over 12.4 million followers. Yet, why's @OfficeOfRG the newest Twitter sensation, and how can Rahul Gandhi benefit from this happy development?

Whether it was Gandhi's "bullock cart yatra" in Gujarat, when denied permission for an open-air jeep campaign, or his strong, scathing takedown of the recent Jay Amit Shah story by The Wire, Gandhi's Twitter repartees and effective use of social media have become the talk of the town. His "Shah Zada" rebuke to describe Jay Amit Shah, and the inexplicable 16,000 times turnover of his companies, has struck a chord much like the 2015 "suit-boot ki sarkar", which too touched a raw nerve when PM Modi sported the Rs 10 lakh Savile Row suit monogrammed with his own name to meet the former US president Barack Obama. The tweets - crisp, cool and biting - have been a-coming, and they have struck at the heart of the agenda-setting beast that's BJP's social media cell.

We finally found the only beneficiary of Demonetisation. It's not the RBI, the poor or the farmers. It's the Shah-in-Shah of Demo. Jai Amit https://t.co/2zHlojgR2c

News reports have followed welcoming this new leaf in the book of Rahul Gandhi. Quite a few also focussed on the spunky Ramya/Divya Spandana, who was "handpicked" by Gandhi to revamp the Congress' social media cell and strategy. That she's doing a splendid job is being widely accepted, although some have begrudged all the money that's being poured into their SM cell.

Yet, no one can deny how energised Congress' official Twitter handle @INCIndia has become since Divya Spandana took charge. If this resulted in a little (some would say sexist) parody, then that too was given a befitting and smart reply by the 34-year-old "newbie" and former actor.

"Behind every successful man there's a woman" ~ Divya Spandana (2017) pic.twitter.com/VvuEghEGb2

This combination of sharp critical attacks and good-natured humour, sportiness and a geniality of presence in the Congress quarters, particularly from Rahul Gandhi, is a sign of confidence being regained. Take the example of his Berkeley speech and interaction. At a time when political discourse has dwindled to a series of bitter altercations, also known as "tu-tu-may-may" in Hinglish, Gandhi managed to be both benign and brutal in his assessment of the Modi regime.

His insistence on non-violence as a strength and lessons from Mahatma Gandhi, was in sharp relief against the uses and abuses of Gandhi as a hollowed out promotional face for all the half-baked government schemes and false promises of the Modi regime. Rahul said: "Using violence against a person, who is infected by an idea, actually results in an idea spreading more aggressively. Non-violence is hard work. This beautiful struggle is under vicious attack in India."

The idea of ahimsa unites India's castes, religions &languages. An idea that Gandhi fashioned into a powerful but beautiful political weapon

This signaled a great departure from the abyss of mutual hatred and disgust Indian political narrative has transmogrified into, becoming a great and grinding machine of mere electoral Darwinism, letting good governance, Modi's initial promise, go up in the smoke and dust of fake news and propaganda.

The return of civility was also a reminder of the great Nehruvian legacy, and Gandhi seemed aware, awake about that historic responsibility, his own tryst with destiny, as it were. The Berkeley speech rattled the BJP so much that they fielded over a dozen ministers and leaders to label Gandhi as a "failed dynast".

Union I&B minister Smriti Irani, Gandhi's own nemesis from the battlefield of Amethi, was the most bitter. Yet, that only conformed that Gandhi's polite pondering had made a significant dent in BJP's high-decibel self-promotion. During his "American study tour", for which Gandhi was initially criticised because he had supposedly run away again, thus failing to be a "24x7 politician" like PM Modi and BJP national president Amit Shah, the Congress VP spoke of Modi's "politics of hate", comparing him with Philippines' Duterte, and Sangh Parivar with Muslim Brotherhood of Egypt for their weaponised use of divisive religious politics.

These were interesting and unusual comparisons, which reflected erudition, thinking and an awareness of global politics beyond the mere headlines of the hyperbolic TV news. There was informed critique of demonetisation, the valuing of a slower democracy in India than the faster, undemocratic growth of China - a sure sign of appreciating the intrinsic plurality of our country and rejoicing in it.

The insistence on inclusive development and saying that economic progress cannot be fulfilled through exclusion came at a time when farmers were protesting in a number of Indian states, suicides among them had crossed several thousands, while their acute distress had been thoroughly mocked when they were notified of loan waivers of a few paise by the Uttar Pradesh chief minister Yogi Adityanath. Senior journalist Aditya Sinha had last month wrote how he had "changed his mind" about Rahul Gandhi, despite the Congress vice-president being in the crosshairs of his writing for the past decade.

Sinha said that his views on Gandhi have undergone a "paradigm shift", even though others were "impatient with Rahul for not acting fast or decisively". And that's because, Sinha says, "Rahul Gandhi is more dignified than the crass and nasty Modi". He compared Rahul's civility with former PM Manmohan Singh's "quiet dignity". It must be noted that both Gandhi and Singh tore into the Modi bastion on demonetisation, with Singh memorably describing the decision in Rajya Sabha as "monumental mismanagement, legalised plunder and organised loot".

The Berkeley speech and Rahul's new spunkier avatar since his return have also portrayed in him a more confident, sarcastic, ironical but nevertheless polite and dignified form. Even his humour isn't a cheap shot, unlike his opponents in the ruling party, whose latest tirade was the distasteful "diaper" remark. Many say this is really how he is, that he's not hiding behind a persona, a mask like Modi is.

In other news Iceberg to Titanic: Reports of disaster exaggerated by pessimistshttps://t.co/gdxDYAfTNQ

Ladies & Gentlemen, this is your copilot & FM speaking. Plz fasten your seat belts & take brace position.The wings have fallen off our plane https://t.co/IsOA8FQa6u

Ashok Swain, one of DailyO's regular contributors and an academic long studying India's international and security relations, had famously asked in January this year if Rahul Gandhi could be the Justin Trudeau of India?

His assertion, comparing Modi to the divisive Canadian strongman and former PM Stephen Harper, whom Trudeau defeated in a David-versus-Goliath battle of nerves and narratives, never ever giving up on pluralist politics, never compromising on the principles of secular inclusiveness, never polarising but soothing and unifying the fraught fabric of Canadian politics, is something that's become far more meaningful in the last few months. 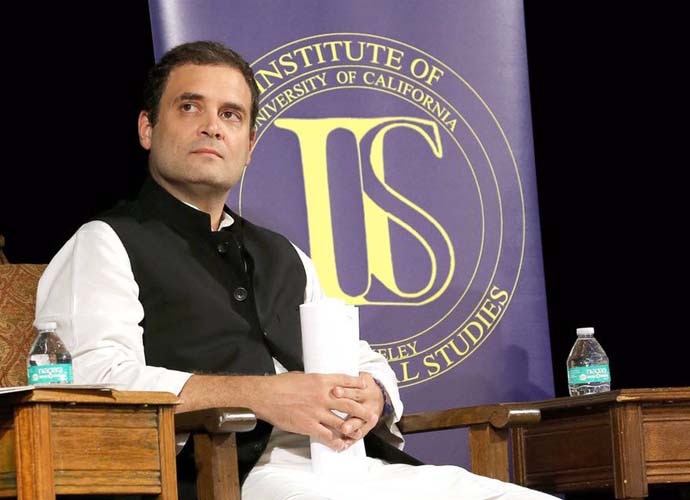 At a time when political discourse has dwindled to a series of bitter altercations, at Berkeley, Gandhi managed to be both benign and brutal in his assessment of the Modi regime. Photo: INC

Yet, how good this good humour is going to be when Modi-Shah-led BJP brings in electoral "surgical strikes" such as the OBC sub-categorisation, playing off castes and becoming the "party of the most backward", in theory, if not in practice? Can Rahul's "dignity" work when faced with cold, electoral math of the election-winning machine that's the BJP, which is banking on religious polarisation and caste consolidation taken to an incendiary extreme? The Gandhi scion is all set to be "elevated" as the Congress president at the end of this month, as several reports have now indicated. He'll be taking on the mantle from his mother Sonia Gandhi, the longest serving president of the Congress, thereby perhaps officially launching himself as the prime ministerial candidate from the UPA camp, taking Modi head-on in 2019 Lok Sabha elections.

But that would mean he would be solely responsible for the party's electoral failings in future, and we must accept that there would be quite a few, if not too many. Gandhi, in his Berkeley speech, had also mentioned that dynastism is ubiquitous in India, and he accepts that he's one. This frank admission showed that a chip in his shoulder had been removed.

If it takes a "failed dynast" to listen to India's secular heartbeat, its pluralist and diverse civil society, reassure its beleaguered and fearful minorities, remember its embrace of many civilisations and cultures over time, its in-built and inherent syncretism, then so be it. What say, @OfficeOfRG?

#Indian National Congress, #Amit Shah, #Narendra Modi, #Twitter
The views and opinions expressed in this article are those of the authors and do not necessarily reflect the official policy or position of DailyO.in or the India Today Group. The writers are solely responsible for any claims arising out of the contents of this article.