The frog prince of Wayanad

An old frog (from 40 million years ago) and a prince (48-years-old) are gracing Wayanad with their presence this season.

Remember the allegory of The Frog Prince?

Well, in Wayanad — the scenic rural district of Kerala — we have the frog AND the prince making their appearance.

It started when a group from Delhi went to Wayanad — little did they expect to discover a new species. Turns out, they did.

The district in the Western Ghats, with lush forests as far as the eyes can see, houses a thumbnail-sized star-speckled frog species that was discovered by scientists from the University of Delhi. The new amphibian — a unique addition to the series of frog species unearthed in this biodiversity hotspot — is a mysterious narrow-mouthed frog that makes only a four-day appearance in seasonal roadside puddles every year in Wayanad district.

After breeding for four days, the frogs mysteriously disappear.

Sonali Garg, a researcher from the University of Delhi, first found the tadpoles, whose physical features and DNA did not match any known species. This was over a routine field survey in Wayanad district in 2013. Two years thence, a team that Sonali was part of hit a jackpot after years of persevering search for the mystery frog. The team found a large colony of around 200 adult frogs in 2015 in a single locality in Wayanad. The site was not hidden in a remote jungle that forms most of Wayanad, but just metres away from the vehicular movement, plantation activities and human settlements. 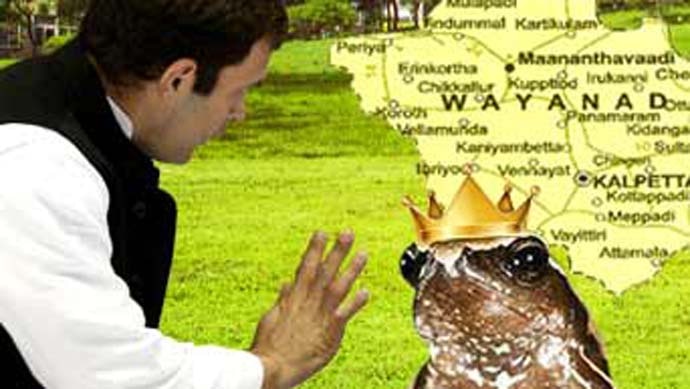 After nearly four years of observing, researching and studying the species, the team published their research in Scientific Reports on February 13 this year.

It is not only a new species, but belongs to a completely new genus called Mysticellus — derived from Latin ‘mysticus’ that means mysterious, and ‘ellus’ for diminutive. The features of Mysticellus Franki is nothing like Indian counterparts, but closely resembles frogs found in South America and Central Africa.

‘Diminutive’, because the tiny little frog is just around 3 cm long.

According to the authors, “Genetic studies further revealed that the frog is around 40 million years old and its nearest relatives live more than 2,000 km away — in Southeast Asia including Indo-Burma, Malaysia and Vietnam. This southeast Asian connection adds strength to the theories that India and Southeast Asia were connected in the past by land bridges.”

We assure you that the group from Delhi that went to Wayanad was a team of scientists — not workers from a national political party testing the depths before a certain prince contests elections from the district. And we hope it was nothing but a coincidence that a certain prince of an Indian political clan decided to contest from the land of the Franki, Wayanad, for the upcoming run-up to the throne, ooops, we mean, the elections.

While the frog might be 40 million years old, our prince is much younger — only 48 years old. And while the Mysticellus Franki has two black spots that look like eyes on their backs to woo the opposite gender, our prince has the power of dynasty and his own prodigious political acumen to woo his voters.

However, what we do not hope for is the prince to mark a mysterious four-day appearance only — if he were to be elected to power from Wayanad.

#Discovery, #Biodiversity, #Mysticellus franki, #Frogs
The views and opinions expressed in this article are those of the authors and do not necessarily reflect the official policy or position of DailyO.in or the India Today Group. The writers are solely responsible for any claims arising out of the contents of this article.