Criticism from government is a badge of honour for journalists: Raj Kamal Jha

Speaking at the Ramnath Goenka awards, where PM Modi was the guest of honour, the Indian Express editor-in-chief succinctly demolished 'selfie' journalists.

The evening of November 2 was an eventful one. On the one hand, there was the grotesquerie of an undeclared emergency with an ex-serviceman taking his own life at the heart of the national capital, and a horde of opposition leaders rounded up for expressing solidarity with the deceased. On the other hand, the prestigious Ramnath Goenka Excellence in Journalism awards ceremony, given out by the Express Group every year since 1995, was held at the luxurious premises of Hotel ITC Maurya Sheraton, and had Prime Minister Narendra Modi as the guest of honour.

It was quite an evening that saw the "establishment grandees" seated in the front rows, while award-winning journalists seated behind, swallowing quietly the bitter pill of irony. Some like Akshaya Mukul and Anna MM Vetticad chose not to show up. Others squirmed silently, as the prime minister offered his views on media, not the usual tirades that he trades on a regular basis in his speeches and other subtler forms of admonitions, but a general guideline as to how the media must not sensationalise news and must work towards presenting India in a better light on world stage.

It was then that Raj Kamal Jha, editor-in-chief at the Indian Express, rose to speak, basically as a note of thanksgiving to the prime minister. What Jha said should be prefaced in any handbook of journalism. 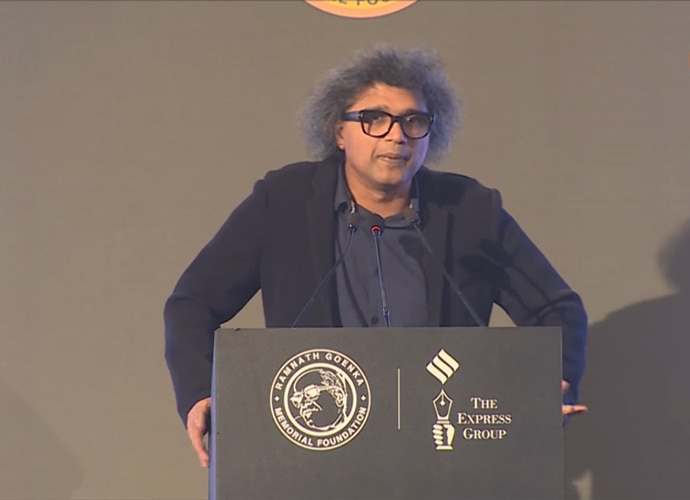 Here's the very short speech. Read and commit it to memory.

"Thank you for your speech, Sir. Your being here is a very strong message. We hope that good journalism should be defined by the work we celebrate this evening, done by reporters who report and by editors who edit and not by the selfie journalists we see a lot these days, who are always obsessed by what they think, by their face, by their views, who keep the camera turned towards them, the only thing that matters to them is their own voice and their own face. All the rest is backdrop or silly background noise.

In this selfie journalism, if you don't have the facts, it doesn't matter. You just put a flag in the frame and you hide behind it. Thank you very much sir for your speech, for your wonderful underlining of the importance of credibility, I think that's the most important thing that we journalists can take away from your speech.

You said some wonderful things about journalists which makes us a little nervous. You may not find it in Wikipedia but Shri Ramnath Goenka, and it's a fact and I can say that as the editor of the Indian Express, he did sack a journalist when he heard a CM of a state telling him, "Aapka reporter bahot accha kaam kar raha hai".

That's very, very important, especially in this age, and I turn 50 this year and I can say that when we have a generation of journalists who are growing up in an age of "retweets" and "likes" and they do not know that criticism from a government is a badge of honour.

So just like what they do in smoking scenes in cinema, I think we should have a tape running in mind when we hear praise of a journalist, that criticism from a government is wonderful news for journalism. I think that's very important.

Thank you sir, for your speech. You made some wonderful points. I think the most important point was credibility. We cannot blame the government for that. That is our job, we need to look within and we will surely reflect on your remarks.

This year for Ramnath Goenka Award, we got 562 applications. This is the highest ever and this is very important to me to underline this number because this is the reply to those who say that good journalism is dying, that journalists have been bought over by the government.

Good journalism is not dying; it is getting better and bigger. It's just bad journalism makes lot more noise than it used to do five years ago. And that is why I think the remote control should get the R&G award for excellence in journalism."