Many of the problems feed off each other —farm crisis has compounded unemployment, rising job uncertainty has led to a fiercer demand for quotas.

Many of the issues feed off each other: where farm distress has compounded unemployment, rising job uncertainty has led to a fiercer demand for quotas by various caste groups.

As CM Vasundhara Raje battles anti-incumbency and a resurgent Congress keeps the heat on her, here are the main issues that will decide the two parties’ fates:

In April-May this year, five farmers in Rajasthan committed suicide, reportedly because they did not get adequate returns on their garlic crop. The agrarian crisis in Rajasthan has been steadily worsening, and the state has witnessed frequent protests by farmers in the past few years. Hail destroyed Rabi crops in 2015. Demonetisation hit the sector in 2016.  This year, a bumper garlic crop led to a prices crashing. The state has witnessed frequent protests by farmers in the past few years. (Photo: PTI)

Electricity remains unaffordable for many. Animal husbandry, which supplemented farmers’ income, is in doldrums— pasture land is being encroached upon, taken for infrastructure projects, given for mining. Cow vigilantism has made cattle-rearing risky. The shrinking land has also made farmers turn to high-intensity farming, pushing up their input costs.

As solutions, the state has offered loan waivers and the Centre a hiked MSP — which many claim is inadequate. But MSP comes into play only when crops reach the market, and is paid only for the crops the government procures.

Loan waivers have been announced only for those who borrowed from cooperative banks, and there are strict conditions — income-tax payers, public representatives, serving and retired government employees and pensioners are summarily ineligible.

Also, the government is struggling to arrange funds for the waiver —National Cooperative Development Corporation (NCDC) and National Bank for Agricultural and Rural Development (NABARD) have refused to lend to it. Sachin Pilot has been raising the issue of farm crisis consistently. (Photo: PTI/file)

The Congress has seized upon the issue, with Sachin Pilot raising it relentlessly.  The government, meanwhile, is busy claiming that “not all deaths can be attributed to farm distress” and “people in urban areas commit suicide too”.

Unemployment was a major poll issue even in 2013, when Vasundhara Raje was campaigning to dislodge the Ashok Gehlot-led Congress government. She had then promised — “Lathi nahi, naukriyan doongi”, referring to a lathi-charge by the government on protesting youth. Raje had promised 1.5 million jobs.

Four years later, according to private think-tank Centre for Monitoring Indian Economy Pvt. Ltd, unemployment rate among those in the 20-29 years age bracket in Rajasthan is 55%. The rate of unemployment among graduates is 14%.

The ingenuous defence aside, the BJP itself has been admitting to high unemployment rates — while in February, party MLA Ghanshyam Tiwari said recruitment to 1.5 lakh posts was stuck in courts due to “the government’s fault”, the CM, after a 28-year-old man was lynched in July, said unemployment was to blame for such crimes.

The influential community of Rajputs, which has traditionally favoured the BJP, has a series of grievances against the saffron party this time.

First, they have not forgiven the “humiliation” of Jaswant Singh, who was denied a ticket in the 2014 General Elections from Barmer. He fought as an Independent and lost. Jaswant Singh’s son Manvendra Singh is contesting on a Congress ticket this time — taking on CM Raje at Jhalrapatan. 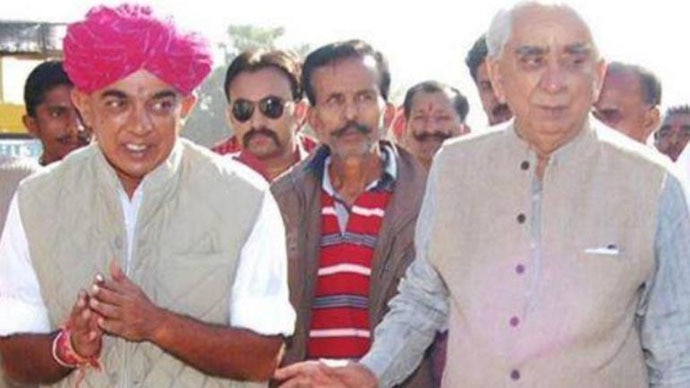 Rajputs have not forgiven the 'humiliation' of Jaswant Singh. His son, Manvendra, is contesting against Raje. (Photo: facebook/ManvendraSingh.Official)

Then in 2016, the community erupted in protests after police shot dead 21-year-old Chatur Singh Sodha, claiming he was a history-sheeter.  A year later, gangster Anandpal Singh, whom the Rajputs saw as their answer to Jat gangsters, was killed by the police.

The year 2016 had seen another face-off between the government and the Rajputs. As part of an anti-encroachment drive, the Jaipur civic authority had sealed the main entrance of the Rajmahal Palace, leading to Jaipur’s ‘Rajmata’ Padmini Devi coming out on the streets to protest. Rani Padmini’s daughter Diya Kumari is a BJP MLA. This time, she has not been given a ticket — a step that will hardly endear the BJP to the Rajputs.

Then in 2017 came the Padmavat controversy.  The community is upset that despite their months-long protests, demonstrations and warnings, the Raje government could not prevent a movie that hurt their sentiments from being screened.

The year 2018 did not improve matters. After the severe setback the BJP suffered in the January by-polls — in part due to Rajput anger — state party president Ashok Parnami resigned from his post. Rajput leader Gajendra Shekhawat and OBC leader Madanlal Saini were in race for the post, and Raje picked Saini.

Raje’s choice might have been driven by the fact that Saini belongs to the same caste as Ashok Gehlot, then-Congress state chief. However, the Rajputs are irked, and comprising 9% of the state’s population, are a major headache for the BJP. Rani Padmini of Jaipur (in red) had protested against the Raje government over the sealing of her palace gate. (Photo: India Today/file)

Their possible forsaking of the BJP has also shaken up caste equations in the state, and now, both the BJP and the Congress are trying to work out new combinations to woo the other powerful groups of Jats, Meenas and Gurjars.

Another major reason for anger against the Raje government is that many people have been removed from subsidy schemes, in a drive launched to weed out fake beneficiaries. Estimates say that while millions have found their names struck out of lists of recipients of pensions, ration, medicines, millions of others are unable to avail the subsidies because the Point of Sale (PoS) machines are failing to read their fingerprints.

Moreover, many are not even aware of the schemes the Raje government has launched for them, while the Centre’s initiatives have not been implemented well.

While the past few years had seen three cases of lynching by gau rakshaks in Rajasthan — Pehlu Khan, Umar Khan and, Rakbar Khan — cow vigilantism is on the rise, and the horrific Rajsamand murder saw people rallying in favour of the accused Shambhulal Regar, religious polarisation seems to be a major factor only in some regions of the state. Things don’t look too good for the BJP in these areas. The ghastly Rajsamand murder, the lynching of Pehlu Khan both took place in Rajasthan. (Photos: Twitter)

In Alwar — where all the three lynchings took place — apart from the Muslims, even the SC and ST communities are angry with the BJP. In the protests in the aftermath of the Supreme Court “diluting” the Atrocities Act, several men from the area were booked. While the Centre has restored the Act, the protesters still have cases to fight — cases lodged by the state machinery.

The fact that Hindutva politics has taken a backseat in Rajasthan is possibly best illustrated by the fact that the BJP has chosen not to field two of its known rabble-rousing MLAs — Gyan Dev Ahuja and Banwari Lal Singhal.

Also read: Rajasthan election results: Here are the major players in the fray