Rajasthan Assembly Elections: Why Sachin Pilot has an advantage, despite his setback

Congress knows that the days of repeatedly tested veterans are over.

The election campaign has picked up in Rajasthan after November 22 was marked as the last date for nominations withdrawal.

Polls for the Assembly was held on December 7. The role of candidates to convince voters has become very important. There has been a feeling that Congress created a mess in ticket distribution and this job should have been left to either Congress candidate Sachin Pilot or senior Congress leader Ashok Gehlot.

By the evening today, exit polls will indicate the way voters have voted.

It will be commendable for either BJP or Congress to get a majority. 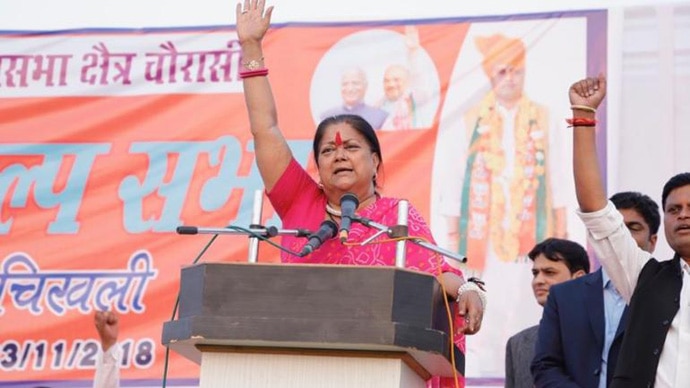 By the evening today, exit polls will indicate the way voters have voted. (Photo: India Today)

If Vasundhara Raje-led ruling BJP returns to power, it would be a great success for the central leadership which broke a cycle of incumbent losing power that began in 2003.

Moreover, there has been vocal anger against the state government.

Ironically, people in the state had never made their feelings against Congress so apparent, even when they defeated the Gehlot governments in 2003 and 2013, when even Congress supporters did not vote for them.

If PCC president Sachin Pilot wins the elections, it would be an excellent achievement for a young leader who was handed over a party which was never expected to rise again in January 2014. Pilot travelled widely.

Gehlot loyalists and his Delhi-based coterie close to Sonia Gandhi will do their best to ensure that Gehlot becomes chief minister, but that will be fatal.

Gehlot, in his two terms as chief minister, led the party to its worst performances ever.

On the other hand, Pilot as chief minister will mean Congress is shifting its focus across the country.

Having backed Virbhadra Singh in Himachal Pradesh to lose, but being successful with Amarinder Singh in Punjab despite his defeat five years ago, Congress knows that the days of repeatedly tested veterans are over.

People in the state have a lot of expectations from Pilot because he comes without carrying any bias for bureaucrats and the media and will look at the governance with a new perspective. Pilot is a charming young leader who is matter-of-fact without going into frills. (Photo: India Today)

A section of the pro-Gehlot lot have been projecting Pilot as a man with attitude and arrogance, but Pilot is a charming young leader who is matter-of-fact without going into frills.

That is unlike Gehlot who could be vindictive given his biases and dependence upon secondary channels, Pilot directly communicates with everyone.

Moreover, if Pilot becomes chief minister, BJP will have to find an alternative to Raje to challenge Pilot for next five years, including for parliamentary elections.

In contrast, if the BJP wins, Raje will be chief minister, even if a higher number of the candidates of the high command and RSS will win, compared to the ones nominated by Raje. Pilot has braved internal sabotage too, and even if he loses, he will still be an asset for the Congress.

Post your comment
#Vasundhara Raje, #Sachin Pilot, #Assembly elections 2018, #Rajasthan assembly elections
The views and opinions expressed in this article are those of the authors and do not necessarily reflect the official policy or position of DailyO.in or the India Today Group. The writers are solely responsible for any claims arising out of the contents of this article.