It's a sad reflection on governments and the lot of politicians of this country, if they have to be almost always reactive.

Does anyone know the price the government of the day in Rajasthan has put on the lives lost in the ghastly incident that happened in Bharatpur? The one that ensnared 24 lives. It's Rs 2 lakh per dead person that is supposed to reach the family from the CM's relief fund. And yes, another Rs 2 lakh by the way of the Prime Minister's relief fund.

Go and tell this to Rajbir Singh, an on-duty police constable who has returned home on hearing about the death of his 17-year-old son, Krishna Kumar. A promising lad who, the family says, could have brought great laurels.

If you do, all you are likely to get in return is a blank stare, enough to look through you, as if staring at nothingness.

Why is it that governments have to wake up after accidents happen, after mishaps consume lives and after people's lives get shattered forever? Is it because it's not the ministers' or their bosses' kith and kin who are at the receiving end of such criminal flouting of norms?

Why do committees get formed, investigations get ordered, ministers and bureaucrats pay visits, actions are promised after tragedies have ruined lives? And for what good? Does the ruling class ever learn lessons in this country?

Why is the fact that so many marriage venues are operating without valid licences being talked about after the Bharatpur tragedy has devoured several lives, many young ones at that?

Could it not have been known that certain venues are not capable of holding beyond a certain capacity and will, in all likelihood, collapse if pressure is exerted beyond a point? Is it not the duty of the present government to prevent such tragedies from occurring, to book those who have been flouting the norms and ensure the rule of law?

Isn't it a sad reflection on the governments and the lot of politicians of this country, if they have to be almost always reactive? Why are they masters at being an utter failure at pre-empting these man-made disasters which can be easily averted?

On Wednesday evening, around 800 guests gathered at the Annapurna Marriage venue with little idea about what was in-store for them. Suddenly, strong winds brought heavy rains and hailstorm with them. Scores of trees got uprooted and power supply got disrupted in the area, plunging the open-air venue into complete darkness.

In a bind over this sudden change of events and with not too many options at hand, the guests began taking shelter alongside the huge but already dilapidated wall which crashed down soon enough, to cause mayhem in the minutes that followed.

Shrieks could be heard as people, both young and old, women and children, got crushed. But there was no one to hear them for those several crucial minutes that they lay beneath the bricks.

A pall of gloom has descended on Sevar road in Rajasthan's Bharatpur. The families of Asha and Dharmendra Saini are a shattered lot. Till yesterday, the two clans were pepping up for a wedding intended to be solemnised with much celebration and fanfare in the presence of their loved ones. Except, it was never meant to be.

Gross callousness coupled with a cruel twist of fate has changed the course of their lives. Perhaps forever. The tragedy that struck the marriage home left six dead in the bride's family and as many injured. It also led to one death in the groom's family and several were injured.

Asha Saini happens to be the third of the four sisters from the Saini family which stays in Malipura area, hardly 2.5km from the wedding venue. Her younger sister, yet unmarried, says her 21-year-old sister had been planning for the D-day for a long time. 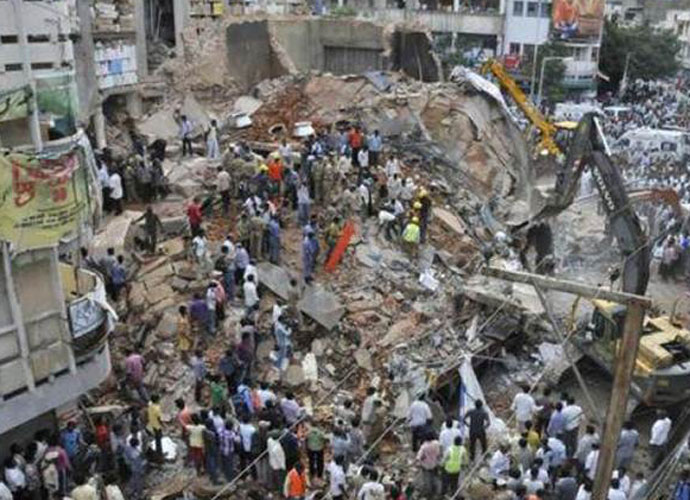 Is it not the duty of the present government to prevent such tragedies from occurring? Photo: PTI

Her family had got the walls of the house painted, with the names of the bride and groom printed on the entrance wall outside in bold, colourful letters. But it was not meant to turn out as planned. Wednesday night's tragedy that struck the wedding venue meant that the final rituals, including the pheras, were completed today morning at home.

In what was meant to be a celebration of a new beginning turned out to be a sombre affair, with those involved devastated. After the completion of the customary rituals, the groom left with the bride for Jaipur, unable to fathom the cruel twist of fate.

Tragedy also struck the home of seven-year-old Prince, who had gone to the wedding venue along with his mother, Anuradha. The mother-son duo are now no more, killed like many others at the wedding venue by criminal callousness more than anything else.

In their pucca home, India Today spotted Prince's grandfather. He rued the time when he left the wedding venue with Prince'e elder brother in tow and left behind the younger one to come later with his mother.

Prince's father now lies on the hospital bed with grievous head injuries, fighting a battle of his own. The elder brother realises he will never get to go to school again with his younger sibling.

At their homes, where myriad forms of tragedy have arrived unannounced, those left behind have been mourning their dead in a sombre state. However, there is seething anger. At how cheap the lives of the poor have become in this country. And how little is expected to change despite the blatant indifference that has brought about unimaginable grief to the loved ones of those involved.

One has to be with them for a little while to get to that rage beneath the veneer of sorrow that lies in the open for the world to see.

Also read: Rajasthan has a drinking problem - of a different kind

Post your comment
#Bharatpur wall collapse, #Rajasthan
The views and opinions expressed in this article are those of the authors and do not necessarily reflect the official policy or position of DailyO.in or the India Today Group. The writers are solely responsible for any claims arising out of the contents of this article.

The writer is the Senior Special Correspondent with India Today TV.