Why Congress is confident BJP's days are numbered in Rajasthan

Mahesh Sharma has been a local-level Congress worker in Rajasthan for half a decade now. Every day at 10am sharp, as he reaches the Pradesh Congress Committee karyalya these days, his eyes lit up as they go up for a quick, furtive glance.

Hanging on the parapet, just below a large hoarding of Sonia and Rahul Gandhi, just as one is about to enter the hallway, is a countdown clock — the one that shows the remaining days, hours, minutes and seconds of the present BJP government in Rajasthan — it's just 174 days, 12 hours, 11 minutes, 57 seconds away: it would have told him today. His eyes do the reading, his mind makes a quick calculation and a broad smile spreads across his face. 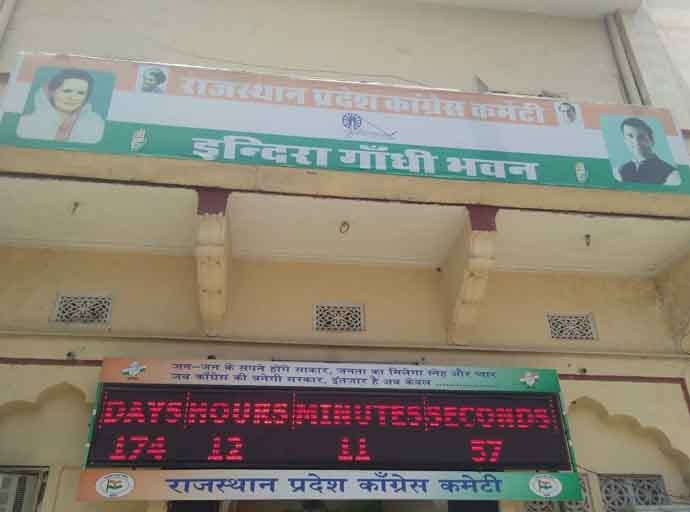 Wait and watch: The 'countdown clock' shows the remaining time before next assembly elections in Rajasthan.

"Yes. The purpose behind this is to show that bad governance is coming to an end. Till then our Congress workers will have to bear with the BJP's bad practices and policies. It will help motivate Congress workers, unemployed youths and women that bad days are soon getting over," Sharma says, adding that the party hopes the clock will act as a perfect reminder.

The clock, referred to as "the countdown to end of BJP's misgovernance" within Congress circles, was installed on Sachin Pilot's initiative.

Pilot's detractors often make fun of him, saying that while other leaders look at the calendar, the current PCC chief can't stop looking at the clock to find out when will he get a shot at power.

Archana Sharma, Congress vice-president in Rajasthan, tells India Today, "It's a symbol of motivation for the Congress workers. This clock reminds us that Congress is soon going to come back to power and that dream is not too far away. It was indeed Sachin Pilotji's initiative."

Sharma, however, hastens to add that the clock in no away shows the party's desperation to get back to power, as alleged by opponents. "It's not desperation. It is actually a source of inspiration for Congress workers," she adds. 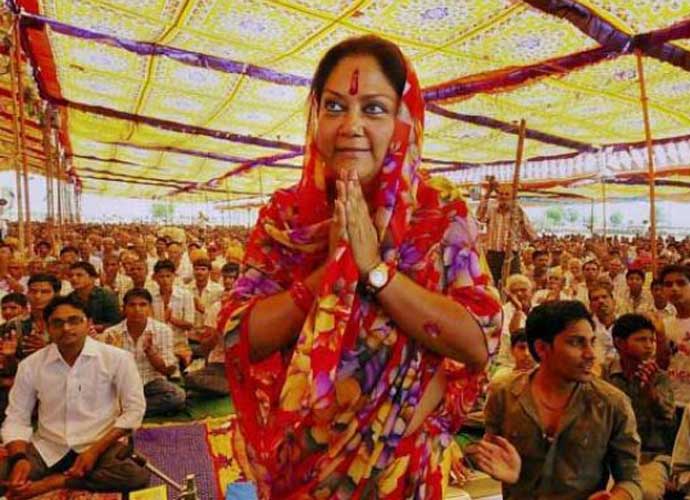 Following the by-poll results earlier, including the two Lok Sabha constituencies of Alwar and Ajmer, the Congress office has been abuzz with hope. The BJP received a massive drubbing at the hands of Congress in those by-polls. And for the hordes of Congress workers, party leaders, commoners alike, the "Countdown Clock", given its placement, is hard to miss.

For anyone and everyone dropping by the Congress office, the clock remains conspicuous by its sheer presence. "The BJP government in Rajasthan is all set to make an exit and the Congress will usher in a better future for the state. This clock helps send that message to everyone," says Sharat Khandelwal, another Congress worker.

Just above the clock, lines in blue ink reads:

The slogan is followed by the number of days, hours, minutes and seconds left for the BJP government's current term to get over — less than six months — in Rajasthan.

The BJP, however, is quick to mock the move and accuses the Congress of spreading canards about the saffron party. "This is nothing but Congress drama. They allege the BJP of corruption when not a single case of graft has surfaced so far. Their job is to make false allegations and spread rumours. On the contrary, the previous Congress government was steeped in corruption," says BJP's Anand Sharma.

The upcoming Assembly election, political observers believe, is going to be extremely tough for Vasundhara Raje and the BJP unit in Rajasthan. BJP leaders, though, rule out the predictions.

"It's the Congress which is getting completely wiped out of the country. Those who believe that Rajasthan has never voted the ruling party back since 1998, this chain will be broken this time as the BJP will get re-elected," claims Anand Sharma.

Well, only time will tell.

Read this story in Bengali