A Viraat Row: No, Rajiv Gandhi didn't treat INS Viraat as his private taxi. And yes, we must bring the precious carrier back to life

Former Navy Chief Admiral L Ramdas writes down why it is necessary for the government to work on INS Viraat lying decomissioned in Mumbai and not play politics over it.

I was based in Cochin, having just taken over command as flag officer commanding in chief, Southern Naval Command. The fleet ships, including INS Viraat, actually are part of the Western Fleet and are under the command of the FOCIN C Western Naval Command.

However, I was requested to play host to the PM on board the Viraat since the island territories fall within the southern command. I was therefore the senior officer in attendance on board the ship.

Rajiv Gandhi was on the ship with his wife for two nights.

There were no foreigners, nor other family members on board during the visit.

Rajiv Gandhi was on a mission to see the islands before he could chair the meeting of the Island Development Authority. We were there to carry out a task of providing safe passage to the Prime Minister of the country for an official programme — and that was that. 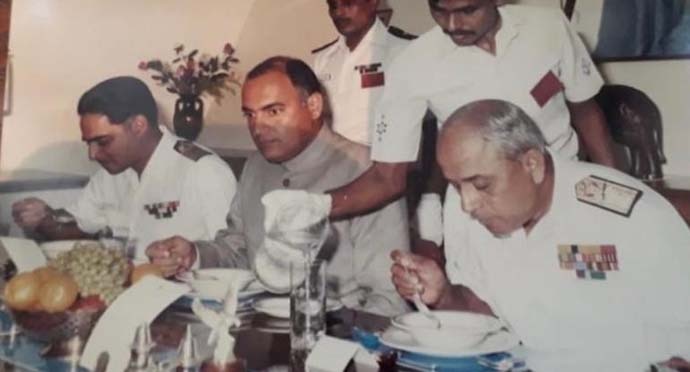 Rajiv Gandhi was on INS Viraat — but on an official trip and not a family holiday. I know because I was there. (Source: India Today)

Thanks to the compulsions of electoral politics, suddenly the good ship Viraat finds herself in the news and in the limelight in a particularly unfortunate context. No self-respecting Air Craft Carrier, nor her crew, would ever like to be described as a 'private taxi service' — not even in jest. The Air Arm of the Navy are proud professionals who are at the front line of the Navy’s combat capability, together with each of the different wings of the three dimensional service today.

To say the least, this attack on a long dead — and martyred — Prime Minister, apparently for narrow electoral ends, has been viewed as a body blow and an insult to the service as a whole.

Coming as it does from the highest leader in the country, it has shocked and disturbed both serving and retired personnel. Worse still, it has tragically divided the silent service into camps — those defending the Navy and the Viraat; and those who choose to defend the version of the story that appeared in two publications over 30 years ago, and which the Prime Minister has chosen to use as a powerful political statement.

This was primarily the reason why so many of us senior naval veterans have chosen to go public with our unambiguous denials.

I believe that the story has now been squarely and firmly put to rest.

But since the spotlight has been turned on the INS Viraat — and if politicians and media are serious in their concern about the reputation and fate of the ship — here is a thought and a suggestion as to how the Viraat can truly be preserved for posterity. Beyond the rhetoric and the politics — we need to take care of INS Viraat. (Source: PTI)

The Navy, led by several senior and junior officers and sailors of the INS Vikrant, the iconic first ever aircraft carrier, tried hard to get the government, i.e. MOD at the centre and state governments, to agree to finding a permanent resting place for her as a public memorial and museum. Many foreign governments take pride in berthing their de-commissioned war ships, similar to INS Viraat, at prominent sites at their major harbours, ports, rivers and marinas.

Not only does it serve as a wonderful historical monument and beacon for members of the public, but it also serves to enthuse and educate generations of young people — motivating a positive and healthy sense of patriotism.

Alas, sad to say, both central and state governments tossed the Vikrant project around like a football or a hot potato — until eventually, she was sent to the Ship Breakers yard in the city of Mumbai, the Queen of our sea ports, the commercial capital of India, home to the biggest industrialists and business houses in the country, citing a lack of funds. Do we want Viraat to meet the same fate?

And if the answer is NO, then here is what we propose — let us draw up a blueprint for a proactive and widely publicised campaign to preserve, conserve and honour this iconic carrier, the Viraat, for our future generations.

I propose that the media houses who have cynically used the Viraat and told half truths about her as a floating fantasy holiday destination for a former Prime Minister and his “foreign” family should now campaign to convert her into a designer destination for overseas tourists, Indian travellers and, above all, for the children of this country.

Imagine what fun it would be to come on board, to learn in a hands-on environment all about India’s Fleet Air Arm and the growth of air power at sea. They can also learn about the building of a maritime nation and all that it demands from so many.

We need to heal the wounds and repair the damage done to the image of the services and our fine Navy by thoughtless short-term political compulsions and rhetoric.

This idea is just one small way in which we can try to make a beginning in that direction.

The writer is former Naval chief.

Also read: Not Only From Sonar Bangla: Why, for the first time in its political history, West Bengal is warming up to a non-Bengali leader

Post your comment
#Rajiv Gandhi, #Ins viraat, #Indian Navy
The views and opinions expressed in this article are those of the authors and do not necessarily reflect the official policy or position of DailyO.in or the India Today Group. The writers are solely responsible for any claims arising out of the contents of this article.

He retired from the Indian Navy as Chief of Naval Staff in September 1993 after nearly 45 years in uniform. In the year 2004, he was honoured by the Ramon Magsaysay Award for Peace in the region.