A look at the possibilities, permutations and combinations likely for the August 9 poll.

The election for the Rajya Sabha deputy chairman’s post is going to be a BJP versus Congress battle — the first war for numbers in the Upper House between the big two since 2014.

At the end of nearly two months of discussions on a joint candidate, regional parties working with the Congress finally decided they did not wish to put up a contestant. The Congress, thus, has been forced to field party veteran from Karnataka, BK Hariprasad, to take on the NDA’s Harivansh Narayan Singh.

On record, the BJP’s parliamentary affairs minister Ananth Kumar maintained, “We want a consensus on the name of Harivansh Narayan Singh of the JD(U), and for that, we are speaking to all political parties.” Behind the scenes, the BJP is making feverish efforts to stitch together the numbers to ensure a win for Harivansh. Picking a JD (U) man for Chairman M Venkaiah Naidu’s deputy in the Upper House is a deft political move.

So complex is the numerical game and so delicate the political alignments that a party like the BJD, with nine members, holds the key to the contest.

Sources say the BJP has zeroed in on a JD(U) man with a strategy in mind. One, it deepens its ties with the party. Second, it is using the good offices of Nitish Kumar, the Bihar CM, to win over non-NDA and non-UPA players like the BJD. Initially, the signal from the Odisha party was that it would remain equidistant from the Congress and the BJP (by abstaining from voting). The buzz now is that with Nitish Kumar’s nudge, the BJP may even support the NDA pick.

This has impacted the Opposition strategy. With the BJD’s support unlikely, the Congress’s allies have lost the appetite to field a candidate to be backed by the UPA.

But it’s still not all smooth sailing for the BJP. It is now the largest party in the Rajya Sabha, but there is no guarantee it can gain control of the seat of deputy chairman.

The Opposition is all set to give a tough fight, use the election to underline where each party stands. A senior RJD leader, part of the Opposition’s efforts to put up a joint candidate to challenge the BJP, said, “This is an election year. The BJP’s rivals can’t let it score an easy win at any level.”

After party candidate Hariprasad filed his nomination, senior Congress leader Anand Sharma said, “This is our collective expression to convey to the people that the Opposition stands together on certain fundamental issues. The government never made an effort to reach out to the Opposition. It didn’t show the courtesy to consult the senior leaders. It just announced its decision to field a candidate.”

The election is on August 9. After it failed to dent the government’s numerical might during the No Confidence Motion in the Lower House, the Opposition is all geared up for this battle.

The term of the last Rajya Sabha deputy chairman, PJ Kurien, ended on June 30. In the first week of July, the Opposition made all the right noises, and it seemed that despite having the largest number of MPs, the BJP faced the prospect of losing. This would have seriously undermined the NDA government’s capability to push through critical legislation in its last year in power, despite having two former BJP leaders chairing the two Houses. 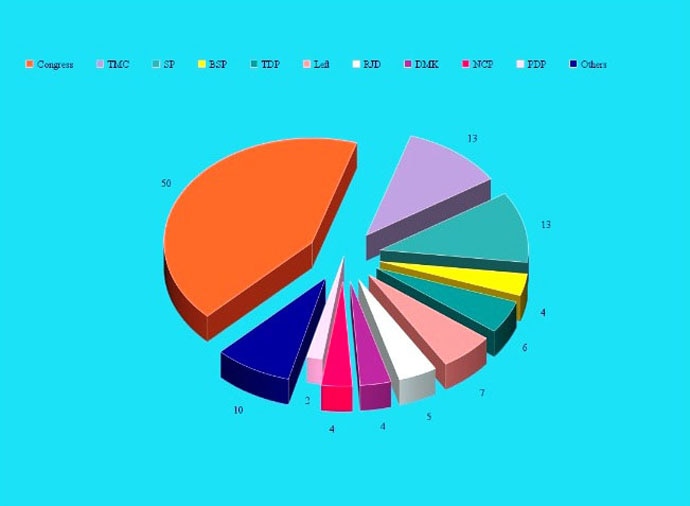 Without the fence-sitters, the Oppositin seems assured of 118 votes, 5 short of the half-way mark. (Photo: DailyO)

The Opposition had done its math and was holding parleys to build a consensus. Leader of Opposition in the Rajya Sabha, Ghulam Nabi Azad, was steering the effort.

Initially, there were signals that the candidate may be from a regional party, perhaps the Trinamool Congress, with the backing of the entire Opposition. TDP chief Chandrababu Naidu and many other regional satraps were said to be working the phone lines to ensure that those opposed to the BJP backed the Opposition pick.

But non-aligned groups in the Rajya Sabha, such as the AIADMK, the TRS, the BJD and others, became stumbling blocks.

During the past two days, the Congress and its allies met several times. A consensus seemed to be building, but by the evening of August 7, chances of a Congress ally being fielded dimmed.

A senior Congress leader said, “After a lot of deliberations, the name of Vandana Chavan of the NCP was under active consideration.  But after consultations, and failing to get the BJD on board, the NCP pulled out of the contest.”

The Congress went into a huddle and decided that it did not want the NDA to “score an easy win”. Party sources said that the Congress didn’t want to let a NDA man get elected unopposed, and hence fielded BK Hariprasad.

If it wins, the BJP will showcase the victory as “triumph over a united Opposition.”

Both the formations are eyeing the votes of the fence sitters.

There can be multiple scenarios:

With allies, Independents and the AIADMK’s 13 members, the BJP is certain of 109 votes, while 123 votes are required to win.

To keep the NDA flock together, BJP chief Amit Shah had sent feelers to Uddhav Thackeray, and conveyed that as a goodwill gesture, the post of deputy chairman would be offered to a candidate from the alliance. The BJD, the YSR Congress, and the TRS account for 17 crucial seats.

The Opposition, on the other hand, was trying to split the NDA ranks, especially where the fissures are wide and visible. TDP sources say that Chandrababu Naidu had spoken to Shiv Sena chief Uddhav Thackeray for support.

For now, the BJP has been able to win over its allies like the Shiv Sena, which had abstained during the No Confidence voting, and the Akali Dal, which was grumbling till the day before as its opinion was not taken by the BJP before picking Harivansh. Akali Dal had been eyeing the berth for its own party, as it is now the BJP’s oldest and motst reliable ally.

The TRS has been inching closer to the BJP, with party chief K Chandrashekhar Rao meeting PM Narendra Modi last week (second meeting in 50 days). Sources say TMC leader Derek O’Brien too was in touch with Rao, the TRS chief, in an attempt to to keep him on the same side as the TDP (the creation of Telangana is still an issue in Andhra Pradesh, the residual state ruled by the TDP). But Rao had sent a different signal by skipping the mega unity show at the Congress-JDS swearing-in ceremony in Karnataka, as he did not want to share stage with the Congress.

YSR Congress leader Jaganmohan Reddy is TDP chief Chandrababu Naidu’s bete noir in Andhra Pradesh, and ideally would oppose his efforts. If he backs the BJP, in the deputy chairman election, the TDP will brand it as the BJP’s ‘B team’, which may hurt its minority vote in Andhra Pradesh.

Without the three fence-sitters, the Opposition has 118 votes. It needs just five more to beat the BJP, while the ruling party needs 14 more votes from its current strength on paper.

If the BJD, like in the recent No Confidence Motion, abstains, the strength of the House will be down by nine to 235, and the half-way mark will shrink, to the advantage of the Opposition.

If the BJD, the TRS with 6 seats, and the YSR Congress with two seats back the Opposition, then the total against the BJP would swell to 135.

A loss in the poll will be a setback for the BJP.

For the Opposition, a win will show the might of the regional players. For the Congress, its candidate sailing through will majorly boost its attempts to lead the mahagathabandhan.