Shilanyas at Ram Janmabhoomi is a propitious beginning towards restoring balance and correcting blunders that have resulted in disproportionately adverse circumstances for the majority community of India.

Popular memory and archaeological evidence suggest that India is one of the oldest surviving civilisations on the planet. Ironically, our history is no more than a few hundred years. Commentators and historians have lamented in detail about the inheritance of loss. There have been multiple movements to impress on the importance of recovering from the wrath of invaders and establishments. Shilanyas at Ram Janmabhoomi is a propitious beginning towards restoring balance and correcting blunders that have resulted in disproportionately adverse circumstances for the majority community of India. August 5 should not be misconstrued as the end of a journey. On this date, India embarks on a sojourn to revisit reams of history that are waiting to be read and acknowledged. With every additional brick, India seeks to mend its chipped past. But these sustained exertions despite ceaseless frustrations that have led to this mobilisation are infructuous if we don’t draw from the learnings.

India has always held knowledge and those who bear it with great reverence. Gurus have played an important role across ages. Right from teaching life-skills to advising rulers in uncertain times, wisdom has commanded respect and trust. It is not in India’s “sabhyata” to cast aspersions on the intent or deeds of the learned. History suggests that the Gurus have also never abandoned their disciples. Unfortunately, with the perversion of socially accepted norms, modern-day custodians of knowledge, i.e. the academics and intelligentsia decided to betray the profession and pledge loyalty to vested interests.

Ram Mandir is an unfortunate example of how a section of intelligentsia misused the faith that social order and public institutions posed in them to serve their personal goals. The entire struggle has witnessed a concerted campaign to systematically depart from the truth. The ginger group denied historical facts, misinterpreted the law, misrepresented epigraphical evidence, created history to support their worldview and even accused their adversaries of communalism. In a bizarre moment, it was recommended that Babri Masjid be declared a national monument!

Comprising mostly of “Left historians”, they plunged into the Ayodhya debate in November 1989 after JNU’s Centre for Historical Studies published the book — The Political Abuse of History: Babri-Masjid Ramjanmabhumi Dispute— An Analysis by Twenty-Five Historians. From alleging that crucial evidence like the Treta Ka Thakur belonged to private collection and not a part of excavations (Prof Irfan Habib) to saying the inscription was fabricated (Sita Ram Roy), purporting that the inscription was an assemblage of two different inscriptions (Pushpa Prasad) — the agenda stood disrobed when those pontificating on the matter conceded that they had not even seen the complete photograph of the evidence. 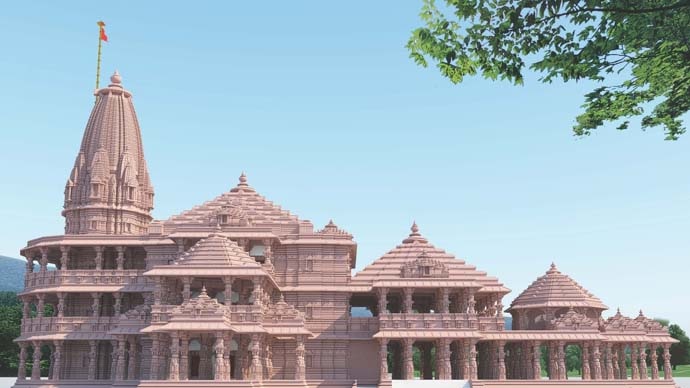 Shilanyas at Ram Janmabhoomi is a propitious beginning towards restoring balance and correcting blunders that have resulted in disproportionately adverse circumstances for the majority community of India. (Photo: India Today)

Similarly, when these self-proclaimed experts who protested against the Archaeological Survey of India (ASI) findings were investigated, one of them — Suraj Bhan — acquiesced that he had never conducted any excavations on his own. Jaya Menon and Supriya Verma had accused the ASI of creating pillar bases; the court called it “really unfortunate” that the two minds had tried to create a background alibi instead of assisting the Court in finding the truth.

Thanks to academics like Dr Meenakshi Jain and archaeologist KK Muhammed who countered intellectual abusers, we have been able to see through astute plunder.

Lesson One: Sophisticated loot and ideologically motivated pillage by academia can cause irreparable damages to an entire populace; of course, reparations for which will never be realised.

It is important to understand that before the advent of Sonia Gandhi’s Congress, arguments to build a school and hospital did not exist. However, as corruption increased and social disparity widened, common citizens began to grapple with bread-and-butter issues. It suited Sonia Gandhi’s Congress to keep the country poor, for the poor have neither resources nor the inclination to think beyond a square meal.

Narendra Modi government was able to free those who were stuck in the vicious poverty trap through both; nudge and one-time social benefit intervention. This has resulted in two measurable outcomes. One, more people were pulled out of poverty than ever before. Two, people saw reason in reclaiming the lost glory. For example, when the Ayushman Bharat scheme covers 50 crore Indians, certain bandwidth-fresh conversations are created. Doorstep delivery of social welfare through Swachh Bharat, PM Awas Yojana, Ujjwala and Saubhagya has created headroom for issues beyond survival.

Economic upliftment triggers aspirations and increases awareness. The latter helps in the formation of a citizenry that makes informed choices. It was easy to misguide the poor and sell them the “Mandir isn’t solving poverty” narrative. The “school-hospital” arguments of the Congress couldn’t hold water post 2014. Moreover, within weeks after the verdict, an international airport at Ayodhya along with detailed plans to burgeon the local economy was shared. All of a sudden, what seemed to be a reason for deprivation served as an agent of economic and social prosperity.

Lesson Two: Only an economically secure community can strive and contribute towards reclaiming civilisations.

Days before the historic judgment was pronounced in 2019, I wrote a piece saying that if Ram Mandir comes, no one can grudge BJP its share of credit, since the party has shown the gall and gumption to commit itself to the cause in its manifesto. We should certainly castigate Sonia Gandhi’s Congress for inventing reasons and devising tools to thwart the construction of the Ram Mandir. But, for a 135-year-old political party, all that it witnessed in support of the temple was a minor blip when Rajiv Gandhi was at the helm of affairs. Prior to him, little was done to attend to the cause that was concerned with the majority populace.

In February 1981, around 400 Dalits converted to Islam in the Meenakshipuram village in Tirunelveli district of Tamil Nadu. The village was renamed Rahmat Nagar. BJP was just one-year-old then. It took three years for a Dharm Sansad — a congregation of 500 Sadhus at Vigyan Bhavan — to stage protest against the incident. Indira Gandhi, the then PM, who had already taken to the company of spiritual mentors, did nothing about it.

Karan Singh, a former minister in Indira Gandhi’s Cabinet was an independent MP. As a speaker at the Dharma Sansad he is known to have said, “We cannot even light a holy lamp” at Ram’s birthplace in Ayodhya, “How shameful a matter is it for 80 per cent of this country’s residents who call themselves Hindus?”

Rajiv Gandhi was the Congress president when Chandra Shekhar became the Prime Minister in November 1991. It is reported that Chandra Shekhar had succeeded in brokering peace between the Vishva Hindu Parishad (VHP) and the Babri Masjid Action Committee (BMAC) through an ordinance. According to the book Chandra Shekhar: The Last Icon of Ideological Politics, his government instituted four committees of experts to go into the historical, archaeological, legal and revenue records, along with other evidence material. Unfortunately, Congress pulled the plug since this was an issue that could instantaneously exalt his stature and politics.

It is foolhardy to believe that the public will fall for Congress’s newly acquired love for Ram. Even if we were to believe that lawyers like Kapil Sibal — who enjoy the patronage of the party — appeared against Ram Lalla in their personal capacity, how do you unsee the deluge of statements made by the likes of Digvijaya Singh and Shashi Tharoor? The treatment meted out to former PM PV Narasimha Rao is a grim reminder of the ideological intolerance that has brewed in the party.

If one of the core values of the Congress was secularism, its silence on the exodus of Kashmiri Pandits is a glaring aperture. If Congress’s Right to Education (RTE) was without the flavour of vote bank, exclusion of minority-run religious institutions is unjustified.

In 2016, Rahul Gandhi went to Ayodhya but never visited the Ram Janmabhoomi. His sister — Priyanka Gandhi — also skipped the visit when she went to the temple town in 2019. From questioning the very existence of Ram to now queuing up to take credit, one cannot help but see this as brazen political opportunism.

Lesson Three: Politicians are known to toggle between words and promises. However, it is the ideological constancy that determines political success in the long run.

Also Read | Ayodhya verdict: How the Supreme Court arrived at the decision