Ram mandir: Why is SC passing the buck?

It is baffling that the apex court suggested mediation of a dispute which has remained unresolved, legally, for more than 120 years.

“Ayodhya is a storm that will pass. The dignity and honour of the Supreme Court cannot be compromised because of it.”

Ram temple is back. Like an eastern tempest, it is dominating news after more than six years. The last time Ram temple-Babri masjid was in the news when the Allahabad High Court, instead of deciding who the land belonged to, divided the disputed land between three claimants.

Aggrieved by this judicial intervention which awarded neither relief nor closure, 14 appeals were filed in the Supreme Court against that judgment. Six of those appeals were by Muslim parties, the remaining eight by Hindus.

After that, the storm abated, till the Supreme Court of India, two days after a BJP government assumed power in Uttar Pradesh, made an observation (not an order) that appeared to be passing the buck. Instead of expediting the hearing of the case, it suggested out-of-court settlement and even mediation by one of the sitting judges of the Supreme Court.

A few hours later, TV studios had become sites of the same “irreconcilable” arguments being thrown around that had forced both the parties to seek judicial remedy in the first place. It is baffling that the apex court in its wisdom suggested mediation of a dispute which has remained unresolved, legally, for more than 120 years.

Undoubtedly, there is always merit in mediation as that allows for resolution of a dispute amicably and in a mutually acceptable way. However, it is worth remembering here that several attempts at settlement have failed in the past. 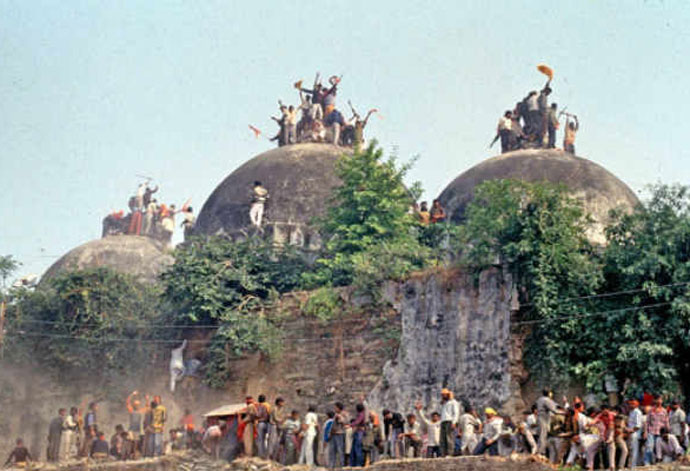 The last time Ram temple-Babri masjid was in news when the Allahabad High Court divided the disputed land between three claimants. [File photo]

Admittedly, the last such attempt was at least a decade ago, and that perhaps is why the Supreme Court thinks it is possible that a renewed attempt might succeed. But after observing the divisive debates on TV and social media, it is clear as daylight that the best recourse for closure of this festering abscess can only be through the Supreme Court. Who else?

Outsiders’ role in the dispute

Neither BJP MP Subramanian Swamy nor the Vishwa Hindu Parishad is a party in the case. But, both of them, especially the VHP, have come to enjoy considerable influence on it.

Their stand is clear, they will not “tolerate a mosque in the cultural boundary of Ayodhya”. The people of Ayodhya who also want the dispute resolved, have no problem with the several other functioning mosques that exist there. The representatives of the Muslim parties have repeatedly stated that they want the Supreme Court to resolve the dispute.

Contrary to what the supporters of the out-of-court settlement option are claiming, no matter which party wins or loses the case, both will get a place of worship. So if Hindu parties win the case, they can build a Ram temple, while the Muslims will be allowed to build a mosque in another part of the acquired land of more than 65 acres.

And if the case is decided in favour of the Muslim parties, besides a mosque, Hindus can still build a Ram temple in the acquired area. The truly religious ought to find in this a noble remedy which is in tune with India’s longstanding but increasingly threatened culture of co-existence and harmony.

Besides, places of worship are provided to both parties under the the Acquisition of Certain Area at Ayodhya Act, 1993, which also states that after the resolution of the case by the Supreme Court, a library and a public amenities complex will also be built. There cannot be a more mutually satisfying solution for both Hindus and Muslims.

In any case, it is only when every other remedy fails that a dispute reaches the apex court of the country. The one in Ayodhya has unsuccessfully gone through all levels of resolution, both judicial and non-judicial.

Thus, it is the Supreme Court that the buck stops at and the sooner it delivers a verdict, the faster Indians can move on.

Also read: Why Adityanath as UP CM still may not see a Ram temple built

#Ram Janmabhoomi, #Babri Masjid, #Ayodhya, #Ram mandir
The views and opinions expressed in this article are those of the authors and do not necessarily reflect the official policy or position of DailyO.in or the India Today Group. The writers are solely responsible for any claims arising out of the contents of this article.