Another demolition is on the way over Ram Mandir

It is often said that there are no new ideas; there are only new ways of making them felt and understood. It is certainly true of the most persistent and vexing issue of our times: the Hindu-Muslim faultline — marker of historical traumas, prejudices and contemporary hatred — all too often seems to determine our national identity and electoral strategy. A most warped thought process governs it, but that’s part of the dynamic that is modern India. 'To be or not to be': Ayodhya has been one of the hardest issues in modern India. (Photo: India Today)

The issue of the Ram Mandir at Ayodhya, to be or not to be, once upon a time the Babri mosque, is a problem that comes back again and again.

Some see it as an opportunity to excite a few atavistic emotions. I see it as a Damocles sword hanging over the head of the minority community who are, in any case, damned if they win the case involving the title deed — and damned if they lose.

Frankly, I wish the Apex Court had not delayed hearing the title case to a date in January. I have wished for years that the matter could be decided, done with and settled, so that we could all move on in life. I have once even advocated in exasperation on a TV debate that it only puts the minority community at peril to hang on to the demand for the title suit as it suits a political project to always position the community as the oppositional “other”. Yes, yes, I know there are issues of the law of the land involved here. Always the 'other'. Muslims are in a tight spot on Ayodhya. (Photo: Reuters)

But from now till the Lok Sabha elections, the entire issue will be calibrated on sentiment — with no regard for the law.

First, the BJP has to act to answer the cadre and larger ideological family about why, after four and a half years of virtually a single-party rule, they have not been able to build a temple? So, they have pressed the panic button on the issue, and will probably attempt to bring a Bill in the Winter Session that they know won’t be passed and then, maybe an Ordinance that will be legally challenged. The party can then ask people to also vote for Lord Ram besides Narendra Modi. 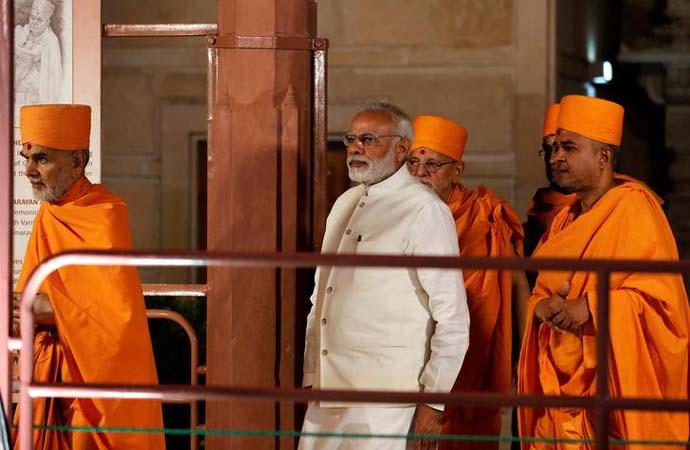 A possible BJP poll-pitch could be 'vote for Modi — and for Ram'. (Photo: Reuters)

By delaying the case further, probably for good legal and constitutional reasons, the Supreme Court has actually given the BJP an alibi to try and turn the sentiment against the judiciary itself and away from the party. In this project, the party is being helped by cheerleaders, who dominate the television media space. They are vigorously engaged in asking the question that if the “Tukde tukde gang” can be heard with urgency by the Apex Court, why not the good people of India — all of whom are presumably waiting for a glorious Ram temple to be built at Ayodhya!

From now till the last vote is cast in 2019, it’s all about managing sentiment: blame the judiciary, the secularists, the Opposition, and paint them all as being against Lord Ram. The BJP and its supporters are excellent at managing what they call “emotional issues” — as opposed to “livelihood issues”.

Never mind that this involves a dangerous game of brinkmanship against another constitutional authority, in this case, the higher judiciary.

The strategy has been initiated by no less than party president Amit Shah himself on the Sabrimala case, where he has thrown his weight behind those opposing the SC verdict allowing women into the shrine. Briefly, he said that “the courts should give orders that can be implemented and they should not give orders that work to break the faith of the people.” 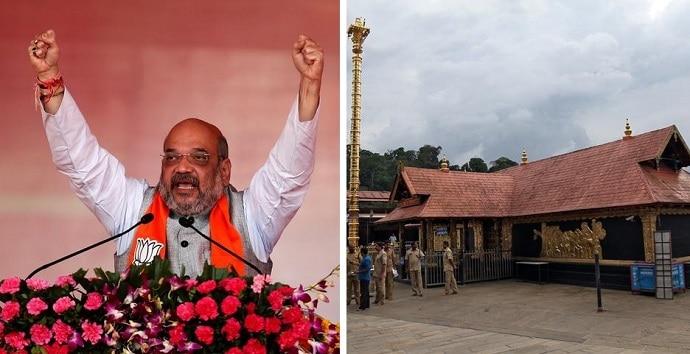 The Sabarimala temple campaign has shown the way for Ayodhya 2019. (Photo: Reuters)

Read the words carefully and understand that this is also about the Ram Mandir at Ayodhya.

The powerful president of India’s most powerful party is saying that religious sentiment gets priority over law. So ultimately, even if the Ram temple verdict were to be delivered post-haste, it would only be acceptable to the president and the cadre he commands if it fits in with what he calls the faith. So much for India being a secular republic by law; on the ground, when there’s an election round the corner, no rules apply.

To add to the theatrics, Yogi Adityanath, the monk chief minister of the state of Uttar Pradesh, whose performance has not impressed, gets to fortuitously preside over a Kumbh Mela at Allahabad (oops, Prayagraj) starting January 15, 2019 to March 4. That is the sort of thing he does well and he would see it as a happy coincidence that his state will have a confluence of both this mighty gathering of believers on the banks of the river Ganges — and will see most of the mobilisation over the Ram temple that would be located at Ayodhya, a few hours drive from Allahabad. His work has not impressed many. So he needs Ayodhya more than ever before. (Photo: Reuters)

The Ram pitch will be feverish — but that does not necessarily mean it would work. Electoral outcomes will still depend on arithmetical arrangements between regional parties in Uttar Pradesh. The Ram temple, as an electoral issue, has mostly flopped down the decades, except when the issue brought the BJP to the national stage in the late '80s and early '90s.

Still, it’s not going to stop the BJP from trying to revive an issue that also diverts from matters such as economic performance, agrarian distress and a defence procurement scandal.