The riots over the weekend in Panchkula, Haryana and Punjab over the sentencing of Gurmeet Ram Rahim have left at least 30 dead and hundreds injured. The crowds had begun to gather days before the verdict, providing authorities with sufficient warning of their intentions, yet there were insufficient preparations. A gathering of lakhs of supporters of any supposed godman is a sign of trouble, as is well known, yet these omniscient signs were ignored.

Earlier incidents of violence following the arrests of flourishing cult exploiters like Rampal in 2014, Ram Vriksh Yadav in 2016 and Asaram Bapu in 2013 are well-documented.

It took the courts to issue strictures which made the state government wake up from its slumber and act.

It was anticipated even by the common man, living in Panchkula, that violence would be on the cards, as soon as the verdict is announced, but famed leaders in political circles and their equally competent IAS and IPS advisors, refused to even consider such thoughts. Hence the authorities wasted time and thus were compelled to react to situations, rather than launch planned and prepared contingencies.

In just one hour of rioting, more than 25 people were dead and hundreds injured. The police and Central Armed Police Forces (CAPF), deployed in the region, lost control over the situation within an hour and the Army was out.

An analysis would indicate a complete failure and lack of intent at every level of the state machinery.

The state had forces made available, whereas it should have been the reverse, where masses were prevented from entering the region. A clear sign of reacting, not anticipating.

This was the state machinery's first major blunder, which they have attempted to defend. Intelligence inputs on large movement of population would have been known, assessing its impact a part of the routine, but ignoring it, another major blunder.

Permitting a 200-vehicle convoy of the accused to traverse the streets of the state, halting regularly at every dera, with live coverage on TV, whipping up passion amongst supporters, is criminal negligence and permitting it, another major blunder.

While the nation is screaming for Khattar as the chief minister of Haryana to resign, why have voices not been raised against the top lobby of the IAS and IPS of the state, who are actually responsible on ground for law and order, to resign, be sacked and charged with dereliction of duty.

They should have done their homework, war gamed options, prepared contingencies and made their recommendations to the Chief Minister to accept.

The state chief secretary is not a file pusher, but the individual responsible, alongside his home secretary, for ensuring the security and safety of the state and its population. They are expected to be the two most senior and capable civil servants of the state, with complete control over all agencies within the state.

They control the intelligence as also the law and order machinery and hence are responsible. If the state has failed, it is because they failed in their assessment of the situation, demands for additional forces and preparing security forces to face the violence. The IPS lobby, which should have anticipated trouble and deployed forces to contain the violence also needs to be questioned. A politician takes decision based on recommendations of his chief advisors. His failure is due to collective failure of the state machinery.

The Jat agitation and the resultant Parkash Singh probe panel report last year had recommended action against state police personnel and suggested changes in the functioning of the state police and civil administration. It is evident that no action was taken and the report, like others before it, is gathering dust as the next inquiry commission would prove. It was again the Army which came to the rescue of the state and was instrumental in restoring order. 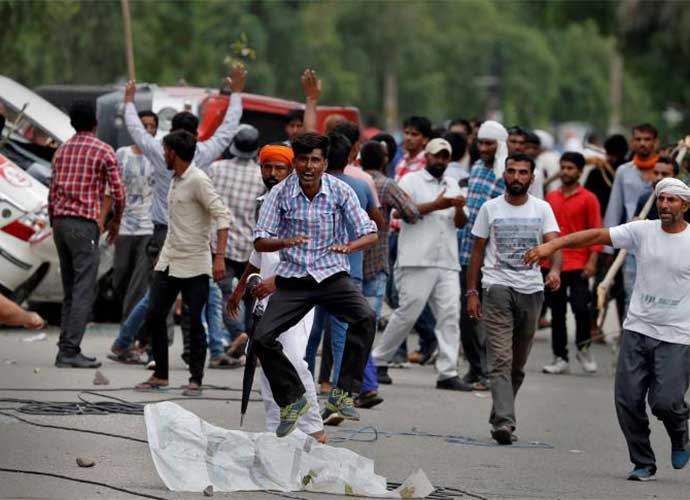 Is there something amiss in our organisation structures, and in training and equipping such forces that the state runs for Army assistance at the drop of a hat?

Why do states maintain such massive police forces, when at the first instance they rush for central assistance? Reports of police turning tail and running away from the mobs was witnessed in the Jat agitation last year and again this year.

If this is their level of training and confidence, then is such expenditure warranted? Or is it because they are left to fend for themselves, while their officers are secure in their headquarters. The centre had pushed in hundreds of CAPF contingents, yet they failed to control the mobs.

Is there something amiss in our organisation structures, and in training and equipping such forces that the state runs for Army assistance at the drop of a hat?

Alternatively, is it a failure of planning, anticipation, positioning, tactics and deployment, where the right forces were unavailable in sufficient numbers at the right time and place. If this was the case, then it is the state's top hierarchy which should be held responsible, not those deployed. If they failed to act decisively or lacked sufficient equipment, then it is lack of training and procurement, again the responsibility of the officer cadre of the state.

Unless those heading the law and order machinery are pulled up and questioned, held accountable and sacked, failures and laxity would become a norm. Politicians are easy targets, whereas those actually responsible are ignored.

The Army is always there, the instrument of last resort which cannot fail, irrespective of mobs and violence. However, rushing it at the first instance of a crisis belies mass expenditure on central forces.

If the Army can succeed, whereas other similar armed central police forces cannot, then we lack training and motivated manpower.

That an Army column headed by a young major could contain a situation, while a collection of forces under multiple director generals of police seems to have failed is a sad reflection on the quality of leadership of our central forces.

Hundreds of CAPF are available and it is the Army which is tasked to take over the deras - this too is a sad reflection of why the central government maintains hundreds of CAPF battalions.

Has the government lost faith in its CAPF? If it has, then the time has come for them to be commanded by the Army. This serious state of affairs must be rectified forthwith or the nation will remain burdened with poor quality police, officered by an incompetent IPS cadre, backed by equally incompetent IAS.

The public cannot accept such failures every time. There must be accountability and responsibility. Those in power must be sacked for failing.

Simultaneously, at the central level, measures must be put in place to enhance capability, leadership and functional efficiency of CAPFs.

They have to be capable of holding the fort, not surrendering the situation within an hour into the Army's hands.