Shrunk to the size of a mouse, tirelessly searching the length and breadth of Lanka, finally, at the Ashoka garden near the palace of Ravana, Hanuman managed to find Sita — so goes the legend. Ten months of search had, at last, come to an end, as he had found his “mother”— his lord Ram’s love. When Sita saw her husband’s messenger, her only plea was that he bring lord Ram to Lanka, defeat Ravana and rescue her from his kingdom. Hanuman, the loyal one, rushed back to his lord to give him the news of Sita. This was just the beginning of another long journey for the already depressed Ram. His beloved Sita had been kidnapped and ten months’ relentless pursuit was about to draw to a close — Ram’s anxiety to see her face was evident.

As Ram, along with the vanara (monkey) army, reached the tip of Rameshwaram, they had no way to cross over to Lanka. Furious, Ram was about to dry the sea with his arrows when Saagar, the ocean god, pleaded with him to stop, assuring him that he would let the king build a bridge on top of the deep waters.

So, the vanara army under the efficient instruction of Nala – the son of Vishwakarma – set about building the Ram Setu and after five days of continuous work, the construction was completed and a floating bridge was in place for Ram and his army to reach Lanka.

The seventh incarnation of Vishnu, Ram had defeated Ravana at Lanka and brought his wife Sita back home. Ram’s life, love and dedication for his people are lessons that are still taught to India’s masses. But the lord’s name has also been invoked for many a wrong reason. The latest controversy that has hit the spotlight is the age-old debate of whether the Ram Setu, or Adam’s bridge, is man-made or a natural formation?

In a recent promo on Science Channel, owned by Discovery communications, groundbreaking claims have been made that Ram Setu is not a natural formation but a man-made structure. To add to the controversial discussion, Chelsea Rose, an American archaeologist, is seen saying: “The rocks on top of the sand actually pre-date the sand. So there is more to the story.” 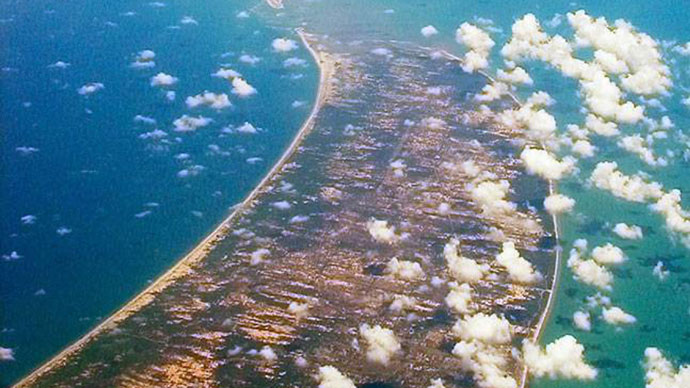 According to the researcher, the stones are nearly 7,000 years old while the sand beneath it is only 4,000 years old. Based on this, an inference has been drawn that the stones had to be placed from another location on the sand.

The findings of the documentary have turned into a raging political debate in the country. The BJP has alleged that the Congress has been working against the interests and beliefs of the people of India. “People of this country were fooled by both the Congress and the DMK. The plan and conspiracy of the two to destroy Hindus has failed. The Cabinet has taken a decision to file an affidavit in this regard and we will not destroy even a bit of Ram Setu. It has once again been proved that Ram is not a myth — the Congress government had said in an affidavit, filed at the insistence of Karunanidhi and TR Balu (who was then the shipping minister), that they didn’t exist. Balu had very clearly said that no Ram Setu built,” said Narayanan Thirupathy of Tamil Nadu BJP.

The DMK, meanwhile, maintained its stand on the Sethusamudram project. Party spokesperson Manu Sundaram said, “The DMK had consistently supported the creation of the Sethusamudram canal because it reduces the time taken for shipping, ships cutting through the Palk Strait. It provides great economic impetus to the southern coastal towns of TN. From the economic point of view, it will be a huge boost for TN. DMK stands for this.”

He went on to add, “Unfortunately, this issue is being seen through the lens of conspiracy theories. Recently, there has been a view that Ram Setu is a manmade structure but NASA itself has clarified this is not the case. The issue is before the Supreme Court and there needs to be some clarity, and — unfortunately — this government has still not filed any affidavit stating its position. So the DMK wants to wait for Supreme Court view. We have, however, been consistent in our support for the project that will give a great economic stimulus to the state.”

The Sethusamudram project has been proposed to create a shipping route between India and Sri Lanka. It would involve digging a 44.9 nautical mile-deep water channel linking the Palk Strait and the Gulf of Mannar. This was first suggested in the days of the Raj by British architect Alfred Dundas Taylor in 1860, and later taken into consideration by the Indian government.

The first Sethusamudram Project Committee was appointed in 1955 under A Ramasamy Mudaliar. The committee, after evaluation, said that the project was feasible and viable, but also suggested that the project be an overland passage and not a channel cutting through Ram Setu. The project saw several reviews till 2005.

On July 2, 2005, the Manmohan Singh government announced the inauguration of the project. In the next couple of years, it was met with widespread opposition, with groups protesting over the structure’s religious significance. In 2013, a committee appointed by Manmohan Singh government also came out with a report that claimed that the project was "unviable both from the economic as well as ecological angles".

The UPA government rejected the religious claims in an affidavit it filed in the Supreme Court: “Valmiki Ramayana and Ramcharitmanas admittedly form an important part of ancient Indian literature, but these cannot be said to be historical records to incontrovertibly prove the existence of the characters and occurrences of events depicted therein.”

While the BJP is dead against the destruction or construction of a bridge or canal on the Ram Setu, DMK spokesperson Manu Sundaram dubbed this the ruling party’s polarising antics: “BJP always claims to stand by polarising the people of this country. BJP has stopped talking about development and only focuses on issues that would polarise. DMK supports the Sethusamudram project because of its huge development potential. A great number of jobs can be created across coastal TN, especially in difficult times for fishermen.”

Ram, according to Hindu mythology, succeeded in building the bridge, rescuing Sita and winning Lanka. But is this bridge necessary today? Will it have drastic ecological effects? Experts seem to think it will.

Will we continue our debates based on religion, sentiment and myth — or trust science and facts?

Also read: US TV show's 'Ram Setu is man-made' claim has got BJP floating on air