Serious historians of modern India have left no stone unturned to dismiss the "Netaji, your war criminal" letter, supposedly written by Jawaharlal Nehru in 1945 to the then British Prime Minister Clement Attlee (spelt Attle in the circulated version), as bogus and fake. 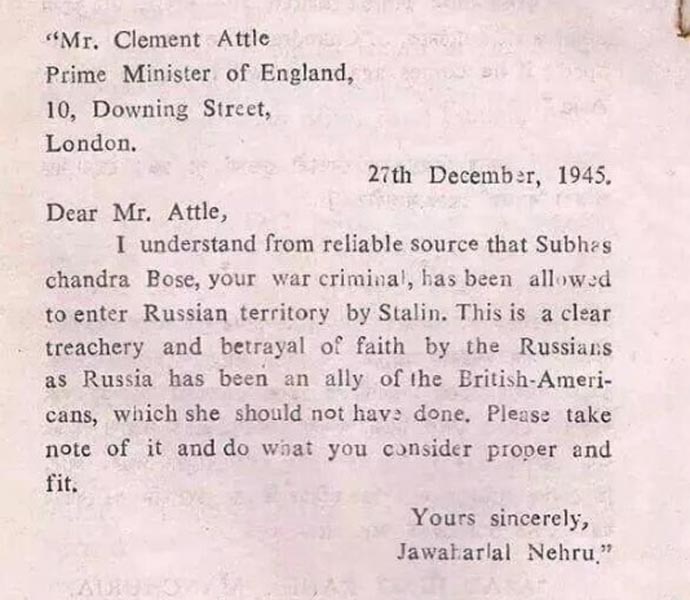 The 'fake' letter from Nehru to 'Attle'.

Among the most vociferous debunkers of the "letter" is none other than the ace chronicler of post-1947 and contemporary Indian history, Professor Ramachandra Guha. Guha has given a series of interviews, including one to India Today, saying that Nehru, was in fact, representing INA (or the Azad Hind Fauj) in the court of law, exactly when the supposed letter from him to Attlee had been allegedly sent (December 1945), thereby indicating a strong conflict of interest and contradiction, pointing to the fact that he could not have actually dispatched such a clumsily worded note. Today, however, Guha went one step further and suggested a possible "Hindutva misappropriation" of Nehru through the circulation of the said letter. Guha pointed out that despite political differences, Bose, Nehru and Gandhi had immense respect for each other, which was reflected in the fact that the INA brigades were named after Nehru, Gandhi and Azad and not Pant, (Sardar) Patel or (Veer) Savarkar.

Hindutva (mis)appropriators need to be reminded that the four brigades of the INA were named after Gandhi, Nehru, Azad & Bose himself. (1/4)

By naming his brigades after Gandhi, Nehru, and Azad, Bose made it clear that these were the three patriots he most respected. (2/4)

Whatever their other differences, Bose knew that Gandhi, Azad and Nehru all completely shared his commitment to Hindu-Muslim harmony. (3/4)

Note whom Bose DID NOT name these brigades after—no Pant, no Prasad, no Patel, and certainly no Savarkar. (4/4).

In an essay last year, Guha had suggested that there is, in fact, no Indian right-wing intelligentsia. Many have extrapolated that thought to point out that this is precisely the reason the right-wing in India tends to (mis)appropriate well known, and fiercely secular, icons of the Indian freedom movement.